Planning Ahead and Hiking Purple Mountain in Yellowstone NP

A large part of our past few days has been spent deciding which direction to head after leaving this area and making reservations which will ensure us that we have a campsite over the coming Labor Day Holiday.  We've found that places aren't usually too hard to get into unless a holiday is involved.

Our plans are pretty flexible at this point.  So flexible in fact that we had no idea which direction we would be heading after we leave here next Monday.  We initially thought about heading down to Utah to visit several of the parks and sights in that area, but thought that the temperatures might still be a bit too hot for us at this time of the year.

Then we thought about heading over to Washington State and visiting the Pacific Northwest area.  We've loosely decided to head west to Oregon and bounce over to the coast before starting a slow movement toward Arizona for the winter months of Nov, Dec, and Jan.

Our plans are solidified at this point until September 18th. 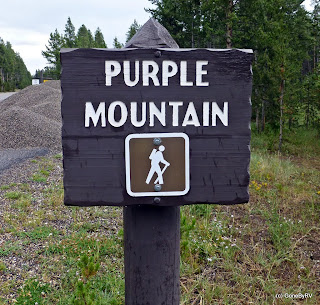 Enough thinking for now. It's time to get back to the fun.  Today we went back into the western part of Yellowstone (near the Madison area) and took a hike up to the peak of Purple Mountain.  The Purple Mountain climb is about 6 miles roundtrip and climbs 1500 feet to near 8500 feet.  The hike to the peak is almost a constant ascent, not many level runs, but was a lot of fun.

As is typically the case, the views from the top are certainly worth the climb. Here's a panoramic view of the Firehole Valley and lower Gibbon Valley. 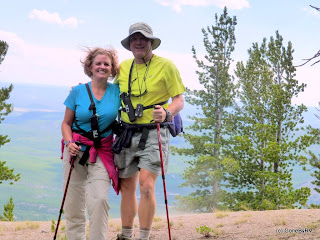 It was pretty windy at the top, and chilly as well. Sorry, the camera moved a bit on us and we lost our feet! 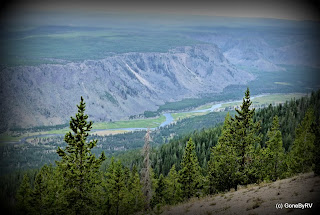 Walking a bit over toward the southern side of the peak you can see the Madison River in the valley below. 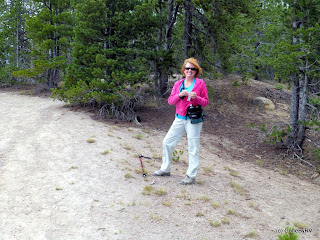 Karen taking a moment to grab a snack after the "obligatory" pictures at the top. 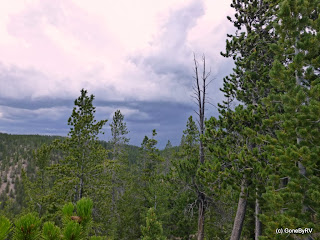 Although the skies were clear and a pretty blue when we began the hike at the base, we had read that this area is prone to weather changes during afternoons in the summer.  Today was no exception.  Thunder started to rumble and the skies were getting dark.  Time to start the descent.

We had descended about a mile when it began raining on us.  We had jackets, but the final two miles were still not as fun as it could have been.  We did make the climb down a lot faster than the climb up, however!

Again, thanks for dropping by to take a look!