Fairy Falls Hike- The Good and the Bad

On Wednesday we decided to take a hike to Fairy Falls, a hike located in the Midway Geyser Basin (between Madison and the Old Faithful areas). After our hike up to Purple Mountain the day before without incident, we were feeling very encouraged.  We had ordered a pair of Deuter Speed Lite 20 day packs to use on our hikes.  They arrived late Tuesday and we were anxious to try them out. 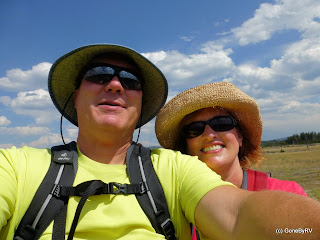 Today's hike was rated as an easy hike covering approximately 7 miles with little elevation change.  The hike was to Fairy Falls and Imperial Geyser.  The trip started out well. Not too hot, some overcast skies. 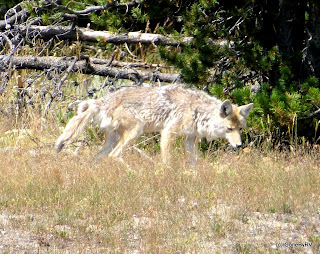 We thought we'd see a lot of wildlife on the way as we traveled across areas away from roads, and we were pretty much alone for most of the hike.  We only saw one bison rolling in the dirt and this coyote which was unusually close to the start of the trail. 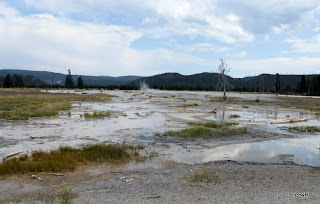 The trail continued through open areas, through some wetlands (created by geothermal features), and through lightly forested areas.  It was a bit strange as our visits to other geysers, mud pots and such all were signed to stay away from the geothermal features and on the trails.  I guess that because FAR fewer people travel these trails, we saw no such posted signs. 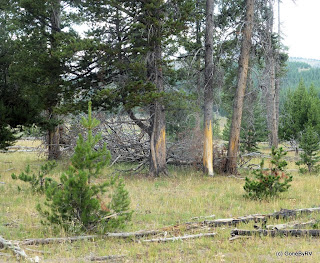 Although we saw only one bison, signs of bison on the trees were evident everywhere.  Whenever you see "rub marks" on the trees, you know that bison frequent these areas. 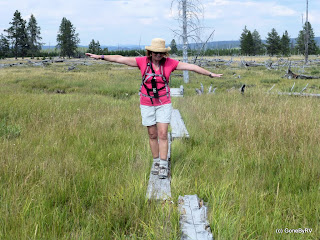 As we neared the Falls area, we passed through grassy wetlands. 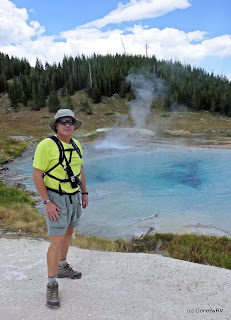 Finally, after about 4.5 miles we arrived at Imperial Geyser.  This area is accessed by continuing down the trail past Fairy Falls.  We were the only people there. The blue color of the geyser indicates that the water is very hot.  The water leaves the geyser and continues downstream towards the Nez Perce Creek.  I checked the water temperature several hundred yards away from the geyser and it was still probably over 100 degrees. 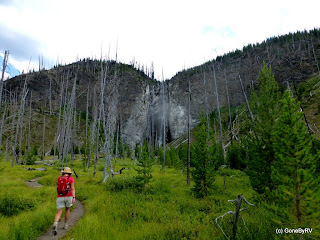 Since we had taken the longer trail to Fairy Falls we hiked onward through the meadows and wetlands.  Yellowstone NP suffered a huge fire in 1988 and the remains of burned trees are still evident throughout the park. 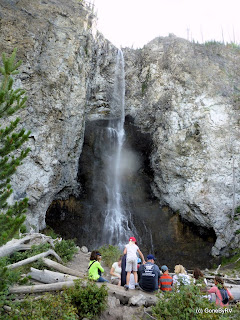 We finally arrived at Fairy Falls and stopped for a quick snack break.  This was the most folks we saw on the entire hike today.  Fairy Falls drops 200 feet, but the width of the falls is fairly narrow.  Still, this area was much cooler than the surrounding areas.


Oh yes, I almost forgot to address the title of today's blog. The good was the hike itself.  The bad was a derivative of the hike.  Let me explain.  We had hiked to the top of Purple Mountain yesterday, a distance of approximately 6 miles with a 1500 foot positive elevation change.  No real problems except for the rain coming down.  Perhaps we were a bit too ambitious attempting back-to-back hikes. Today's hike wound up being 9.4 miles, but was relatively flat. The hike wasn't that bad, but we both wound up with blisters on our feet.  Not sure why as we'd both worn our shoes and they were broken in well. Nonetheless, it's enough that we may have to forego hiking for a few days.  On the positive side, the new day packs worked very well. 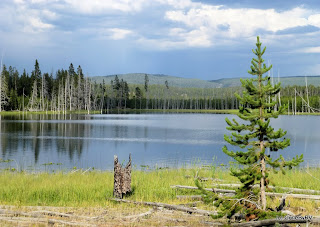 So as to not end on a "downer tone", here's a picture of Goose Lake which we hiked past on the way back to the trailhead.  Again, however, not one bit of wildlife did we see near the lake.    :(