A Small Taste of Quartzsite, AZ

A few months ago we thought that we might take our rig to Quartzsite, AZ and "experience" boondocking in the desert with several hundred thousand other folks.  As the time got nearer, I just decided that I didn't want to pack up the rig and drive up to Quartzsite for a few days.  Maybe in the years to come we might think about trying to do the "Quartzsite RV experience".

We had heard that several of our friends were staying in Quartzsite and received invitations from them to get together.  So, on Monday we made the 3 hour drive from Casa Grande to Quartzsite to have lunch with friends Bill and Kathy and  Randy and Pam.

Since we had never been to Quartzsite during the insanity that is RVing in January, we decided to meet at LaMesa RV (at the corner of East Main Street and South Central Blvd. (Route 95).  Everyone found each other quickly enough and we initially decided to eat lunch at LaMesa RV, but after looking at the long line decided that we needed a plan "B". 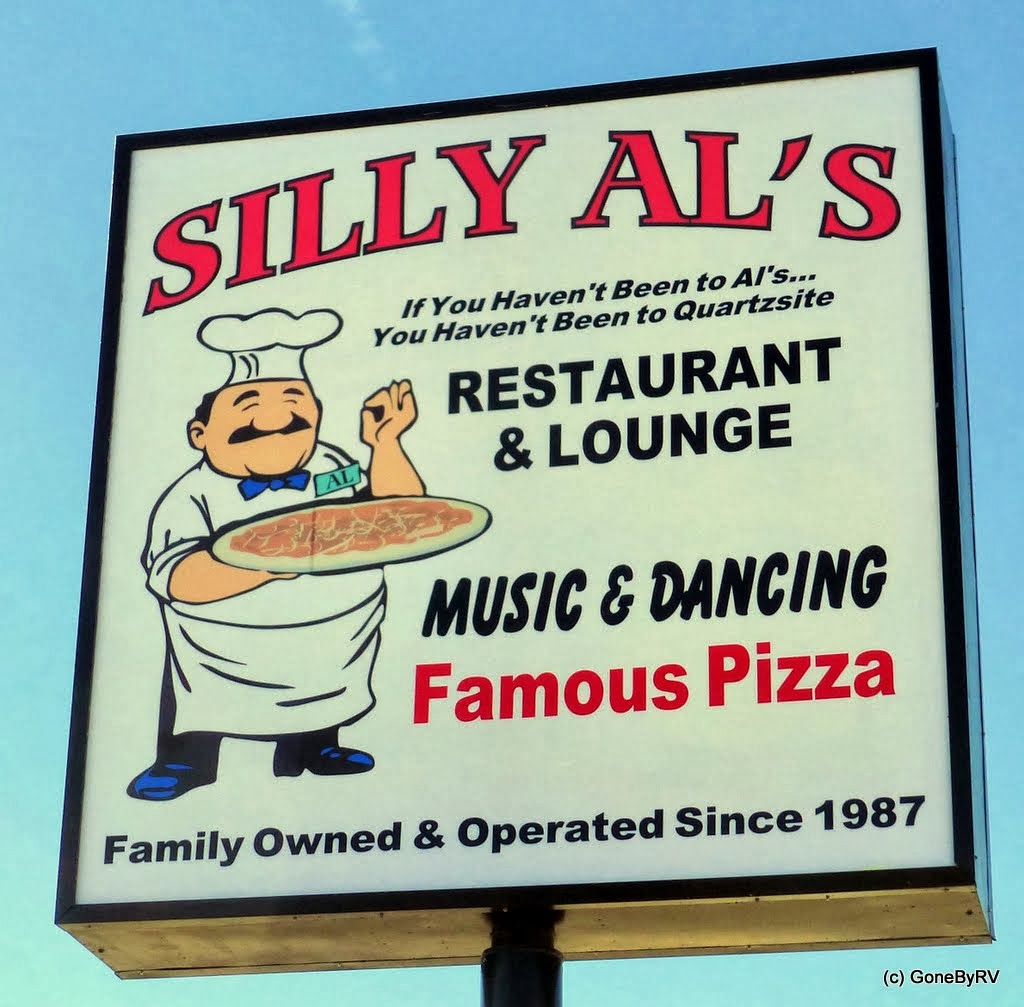 Bill and Kathy had been to a place named Silly Al's Pizza a few short blocks away, so we decided to make the short walk because it was a really nice day.

The food was good, but the opportunity to once again meet up with good friends was even nicer. We first met Pam and Randy back in 2008 at a Life on Wheels Conference in PA.  They were investigating the fulltime RVing lifestyle at that time and we found out later that they only lived a couple of counties north of us in Virginia.  They began the fulltime lifestyle in 2009 and have an excellent blog entitled The Roadrunner Chronicles. Pam and Randy live in a Tiffin Allegro Bus.

We met Bill and Kathy at the Tiffin Service Center in Red Bay, AL in March, 2012.  They live in AZ, but spend many months each year on the road in their Tiffin Allegro Bus.

Here's a picture of us (well, except for me) inside Silly Al's Pizza waiting for lunch.


Bill and Kathy, Pam and Randy, if you get a chance to read this blog entry we were VERY happy to get a chance to see all of you again, if only for an abbreviated time.  I'm sure our paths will cross again.

After lunch, Karen and I wanted to visit the RV "Big Tent" and see if there was anything that we just couldn't live without.  As it turned out, the crowds were not nearly as heavy as I had envisioned.  We were able to negotiate the inside and outside vendors fairly quickly. 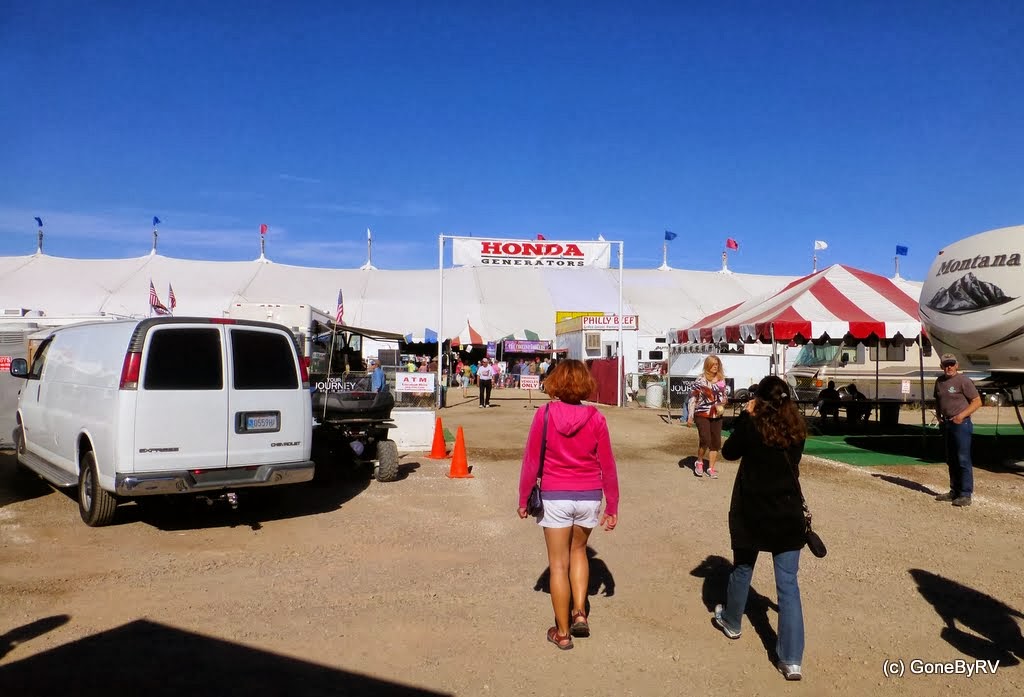 Here's a picture of Karen and Kathy heading toward a side entrance. 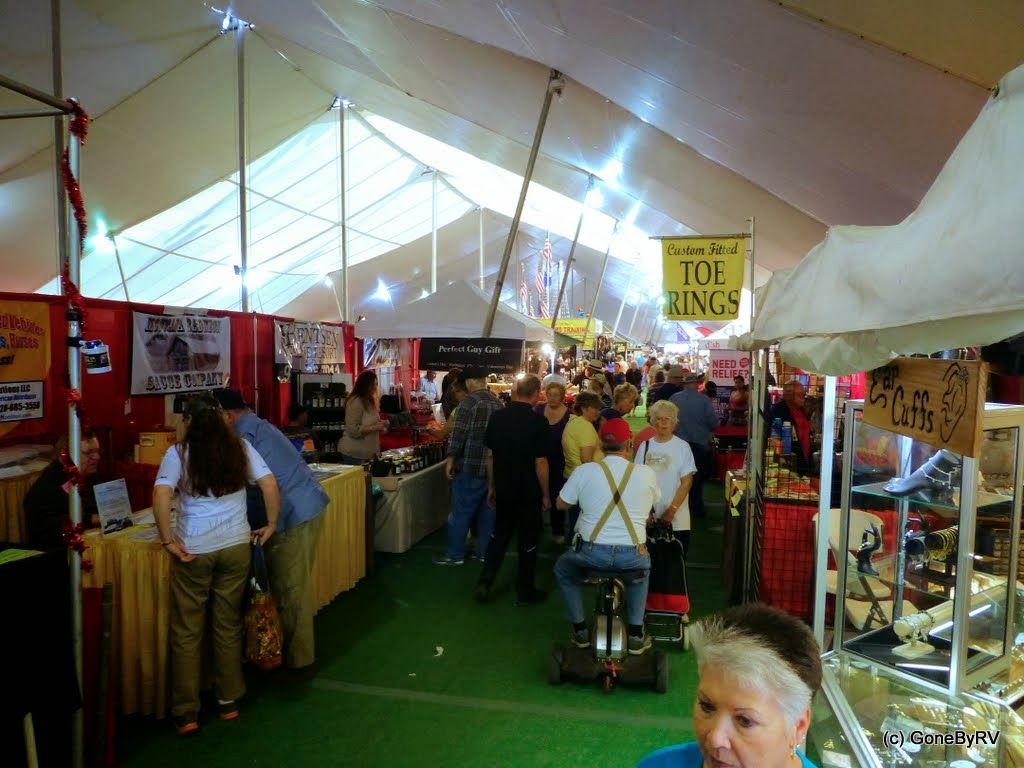 There certainly is a bunch of stuff to look at inside the tent.  There are items which deal exclusively with with RVing, services for massages, quite a few "snake oil" vendors, and even quite a few reputable vendors which we've purchased from at various locations throughout the United States.

One of the items I really wanted was ice cream in a waffle cone, but the lines were just too long. Oh well, that' probably a signal that I didn't need it anyway.

We didn't get out into the desert areas to visit with anyone out on the BLM areas, but maybe next  time!

Posted by Steve and Karen at 8:27 PM No comments: