This was our first trip to Yellowstone National Park ever. The only comment that I think is appropriate is that if you don't like what Yellowstone Park has to offer, then you just don't like the outdoors! Period! 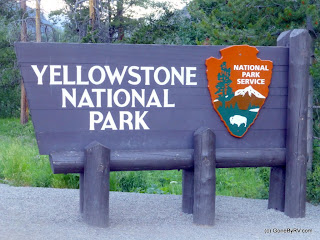 We are still in Cody, WY which is approximately 53 miles from the East Entrance to Yellowstone.  Because of this we decided to take an initial trip to attempt to visit some of the thinks on the east side of the park before we move next week closer to the West Entrance (where we'll be only about 14 miles from the entrance).

Since we'll be breaking posts to Yellowstone into several blogs, I've decided to call this Part 1.  I'll also be including a highlighted map of our travels for that day's travels in each blog.


Here is an over view map of Yellowstone National Park.

Here is our travel for today's blog.

I've decided to keep the commentary to a minimum and show a lot more pictures than I normally do. Starting west from Cody, WY the road is relatively level and quite easy to drive in a MH. (We're still debating our route to get to Idaho and the West Gate area.) 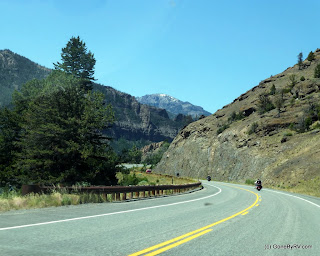 Getting a bit closer to the East Entrance. 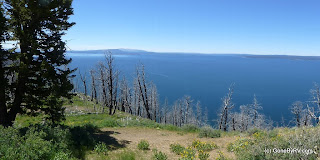 Our first stop was at Lake Butte Overlook.  This gave us our first glimpse of Yellowstone Lake. At an elevation of 8348 feet we were able to see some of the peaks in Teton National Park to the south. 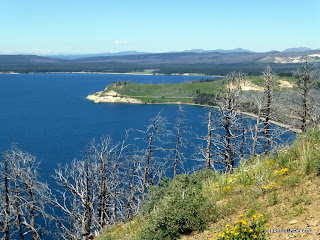 Looking a bit toward the northwest toward Fishing Bridge.  We learned that Yellowstone Lake is the largest freshwater lake in North America above 7000 feet.  It has a maximum depth of almost 400 feet. 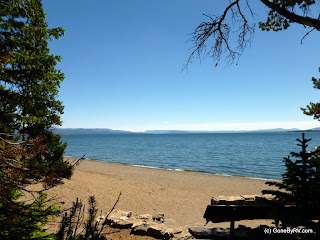 Our next stop was at Fishing Bridge Visitor's Center to eat lunch outside and to obtain general information about the park. There's a small rocky beach area adjacent to Yellowstone Lake in this area. 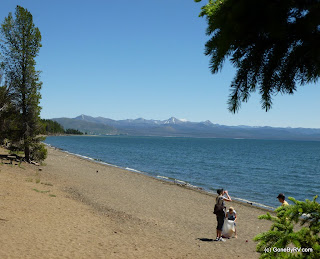 Same area with mountains in the background. 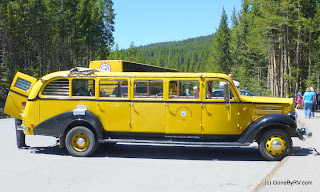 There are a multitude of pullouts, picnic areas, and viewing areas for wildlife throughout the park. (That's a good thing as "critter backups" are quite common when wildlife is spotted.)  We left the Fishing Bridge area and heading north.  We saw a sign for LeHardys Rapids and the lot of stopped cars, so naturally we had to investigate. The first thing we saw was this Yellowstone Touring Bus. I learned later that this was one of the first ways folks toured the park in years gone by. Today, anyone who has the appropriate amount of cash can take a tour. 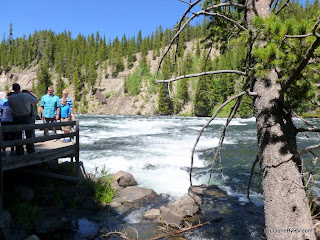 LeHardys Rapids is a favorite location to view native cutthroat trout spawning this time of year. If you look carefully in the calmer pools of water you might see a view.  It's also quite common to see them jumping above the water. 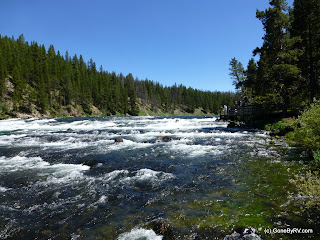 I decided to check out the water temperature.  Afterall, it is early July.  Diagnosis:  Still pretty chilly!

﻿
Yellowstone Park is not only known for wildlife, but also for its' many hydrothermal features.  We encountered the first of these at an area named Mud Volcano. We discovered that this area experienced a series of nearly 500 earthquakes between July 1 and 15 of 1995. Most of the signs here indicated that his area will most certainly change when visitors come back in the future.


"This mudpot roared into existence in 1948, blowing trees out by roots....For several decades it erupted in explosive 10-20 feet bursts of black mud. Over the years it has moved 200 feet to the southeast and become relatively quiet."   NPS Sign Posted at Black Dragon's Caldron 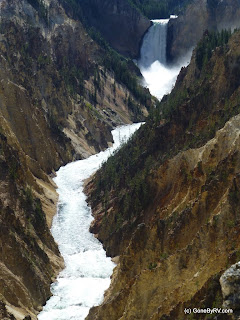 We continued north and came upon a road leading to the "Grand Canyon of the Yellowstone". There are two areas where the Upper and Lower Falls can be viewed.  We continued on to Artist's Point to first view the canyon and the Lower Falls. The Lower Falls actually has a higher drop at 308 feet versus a mere 109 feet for the Upper Falls. 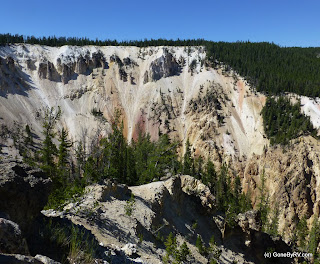 This picture really does not give you a true "feeling" for the canyon.  The steepness of the canyon walls are quite impressive and very colorful. 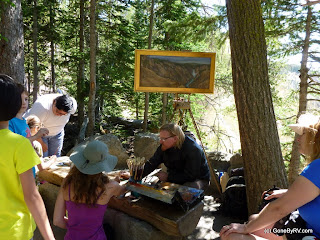 Oh, wondering why it's called "Artist's Point"? Because there actually was a true artist on site painting. 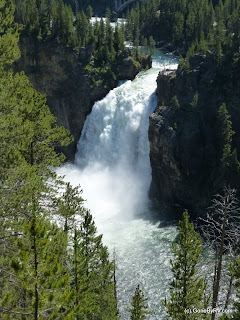 Let me add one picture of those unimpressive Upper Falls.
We stopped at Canyon Village Visitor and Education Center to view an introduction to the park film and browse a very nice center.  By now it was almost 5:00 PM.  We were getting hungry and we knew we had a long drive back to Cody.  We ate dinner in the dining area and then began re-tracing our route back toward the East Gate.

Midway enroute to Fishing Bridge is a beautiful area named Hayden Valley.  This is usually a very good spot for wildlife viewing. 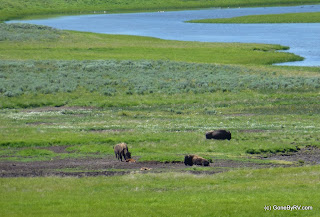 With evening closing in, several forms of wildlife were a bit more active.  This meant "critter jams" along the way as folks pullover (or sometimes just stop in the road) to view buffalo, elk, bears, deer, and possibly coyote or wolves. 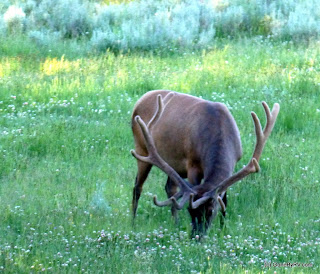 We only saw a few of the above mentioned this time, but they certainly are a sight to see.  Here's a large elk grazing and not really paying much attention to anyone watching him. 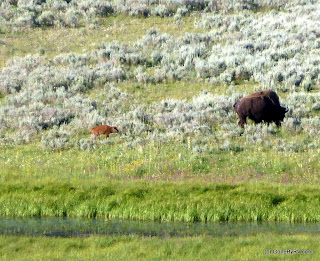 Here's an instance where I would like to have my older camera with the nicer zoom lens again.  Hopefully you can see momma and baby buffalo in the distance as the little guy tries to keep up.

Thank you for hanging in their and reading about our first trip to Yellowstone National Park.  To say that this is a BIG park is an understatement.  We spent all day there and barely scratched the surface. We probably won't be making anymore trips to Yellowstone until we re-locate next week to just south of the West Entrance.
Thanks for stopping by to take a look!
﻿
﻿
Posted by Steve and Karen at 12:36 AM