We decided to take a break from Yellowstone NP yesterday and explore some of the attractions near us. We learned something new about the "City" of Island Park as well. We had been somewhat confused since arriving here as we saw a roadside sign indicating the beginning of the city's limits just after getting into Idaho, but were confused as most maps show Island Park many miles further south on US20.

From the official City of Island Park's government website:

The City of Island Park, for all other descriptive words, is "unique" in it's (sic) entirety. It was incorporated May 16, 1947, to meet a state law requiring businesses that serve or sell alcoholic beverages to be within incorporated towns. The City's government at the time drew up the City's boundaries to include all the businesses from the Last Chance area north to the Montana border that desired licenses to serve and sell alcoholic beverages. All other areas of what is now known as the Island Park Recreational area remains in Fremont County. .... Since 36.8 miles of Highway 20 are in the City, the City of Island Park proudly boasts that it has the "Longest Main Street in America".
We read about an area called Big Springs in some local literature. Since it was only a short drive south of us we decided to take a drive.  Big Springs, by some accounts, is the 40th largest spring in the U.S. Its' waters are derived from the Yellowstone Plateau and flow into Henry's Fork of the Snake River. 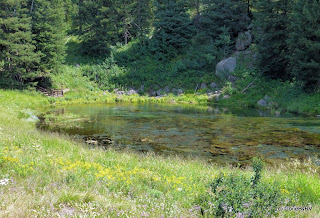 Big Springs flows 120 million gallons of water per day at a year-round constant temperature of 52 degrees. 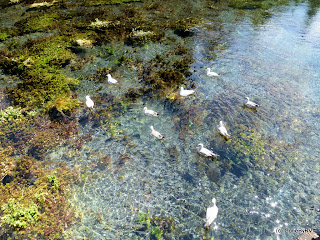 The water here is crystal clear and is said to support some of the best trout fishing in the country, although fishing is prohibited near the springs. In fact, all types of boating, fishing, and swimming are prohibited until about a mile downstream near an abandoned railroad trestle. The only activity allowed here is the "feeding" of the fish and seagulls. 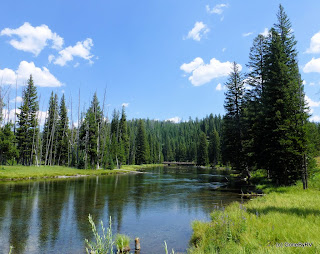 There is a 1-mile nature hike which parallels Henry's Fork from the Big Springs area down to the railroad trestle. This is a favorite wildlife viewing area for moose, elk, possibly bear, and lots of birds. 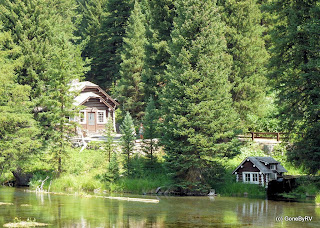 An interesting structure built right beside the springs is Johnnny Sack's Cabin. Johnny Sack was of German descent who leased a tract of land from the US Forest Service in 1929 and shortly thereafter built this cabin and a small pump house using only hand tools and with only little assistance.  He was the lone winter resident in the entire area. 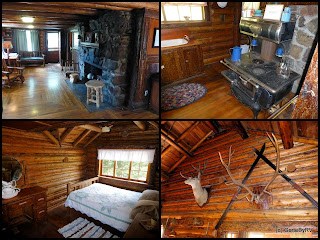 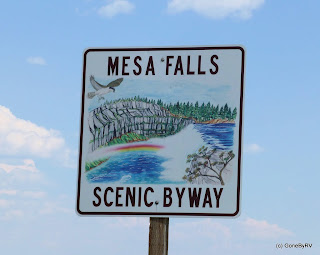 After completing our short nature trail walk we jumped back in the car to again head approximately 6 miles south of Island Park (the spot on the map) where we picked up the Mesa Falls Scenic Byway. The route is 28.7 miles and begins at FS294 in the north and ends in the town of Ashton (at US20) to the south. It generally follows Henry's Fork of the Snake River along the drive.

The main attractions on this drive, aside from the landscape along the road itself, are the Upper and Lower Mesa Falls. 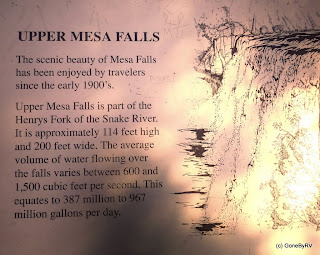 The Upper Mesa Falls is the largest and usually draws the largest crowds, although there were very few present today. 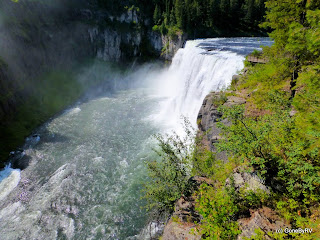 The viewing area decks enable folks to get very close to the falls. It's hard to see in this picture, but the constant mist created by the falls, which sprays onto the opposing canyon wall, forms a microclime which enables  very lush, green vegetation to survive year round. 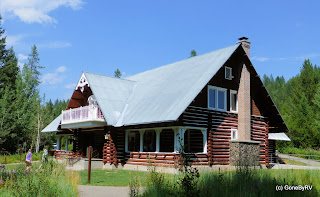 At the top of the trail area is today a Visitor Center, but it originally housed Big Falls Inn. The structure was built in 1915, but has served many purposes throughout the years. 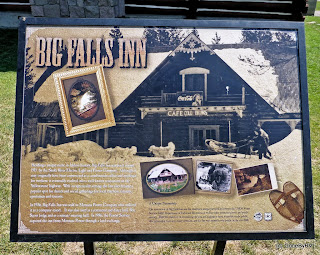 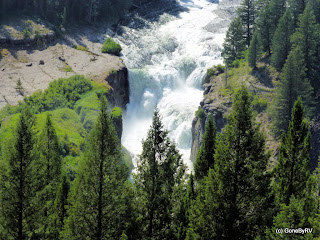 A couple of miles furthe down the Mesa Falls Byway you come to the Lower Mesa Falls.  The observation point for this falls is far up the hill, thus this falls doesn't have the same visitor impact as the Upper Falls, but it's still pretty to view.

The Byway ends in a few miles at Ashton after traveling through some huge open farming areas. A short, easier sightseeing day was a welcome change.

Thanks for dropping by to take a look!
Posted by Steve and Karen at 5:45 PM