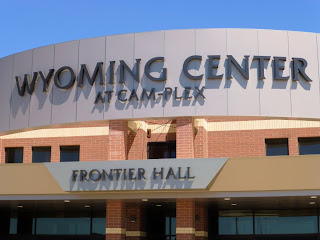 Early Sunday morning we pulled up jacks and headed west on Interstate 90 approximately 160 miles to Gillette, WY.  We are attending the Escapees RV Club's 53rd Escapade which starts on Sunday and closes on Thursday.  The Escapade is being held at the Cam-Plex in Gillette, WY. We came in a day early to get settled in and get our bearings in the area.

We are Lifetime Escapees Members and will be attending our 3rd Escapade (which is a national Rally held annually by the Escapees RV Club). It's both a fun and educational event. Seminars are held throughout the day and usually begin at 8:30 AM and end at 4:00 PM. You can attend as many, or as few, seminars as you'd like each day.  We always find new and enjoyable subjects relating to RVing, fulltiming, and technical areas of interest. 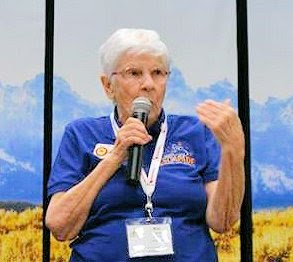 The opening ceremony for the rally occurred on Sunday afternoon.  If you ever been to a large RVing rally it's pretty much similar to others.  The rally directors introduce their staff and welcome the attendees, the schedule for the rally is revealed, and general "house keeping" items are covered.  A special person attended the opening program this evening, however.  Kay Peterson, who along with her husband Joe Peterson (now deceased), started the Escapees RV Club on July 4, 1978. This Escapade is also a birthday celebration of 35 years for the Club.  I will say with certainty that Mrs. Peterson (also known as Miss K) is still certainly very alert, and downright funny. 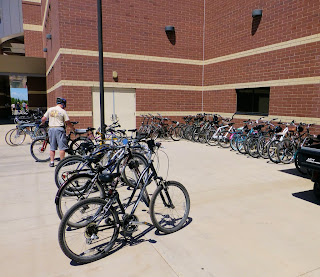 If you've never been to the Cam-Plex for any rallies in Gillette, WY, it is a very large complex.  The parking area for the RVs are some distance from the buildings used to house the activities.  Although golf cart shuttles are available between these two areas, many folks either walk, drive their own vehicles, or bicycle over.  We've been using our fold-up bicycles here and their functionality is at their best for this. 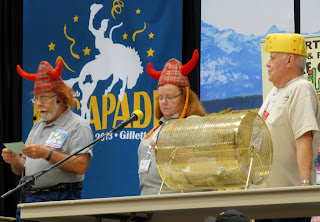 Each evening thus far, the majority of folks have returned to the main exhibit hall for the evening's entertainment and pre-event which consists of door prizes drawn by Scott and Karen Bonis.  Scott "warms up the crowd" by telling a series of jokes which are usually silly enough to be funny. 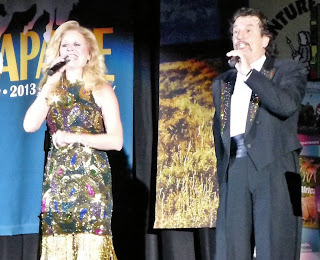 Sunday evening's entertainment was provided by an husband and wife team named "The Rivoli Revue". They performed a comedy and music show with a strong emphasis on patriotism and America.  The show was very well received by those in attendance.

Monday was a very "lucky" day for Karen and I.  We attended a seminar put on by vendors of a product called Wash Wax All.  It is a waterless cleaning product which can be used to clean the MH and Honda in campgrounds where washing is not allowed. (We've found that very few campgrounds actually allow full washing of our rigs, so I've been looking for an alternative for awhile now.) We sat in on their seminar and I won a gift certificate in their raffle drawing.  Let me tell you, I don't win a lot of anything like this! 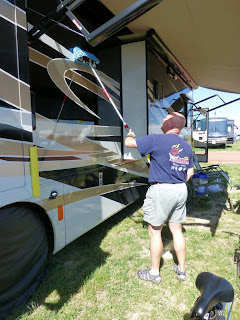 Long story short, I purchased their product and started using a bit of it this evening before our evening entertainment.  I've only done one side so far, but am very pleased thus far.  If you have any questions on this, drop me an email.  (gonebyrv   at   gmail.com)    End of advertisement.

Monday evening we returned to the main arena to watch Patty Davidson, a comedic ventriloquist, but before the show door prizes were once again drawn.  Back to our "lucky story" here.  I won an LED 12-volt tester and a $50 debit card given by one of the vendors. Not 5 minutes later, Karen's number was drawn and she won a pretty rug runner and a $25 gift certificate to a local restaurant.  It was a good day. 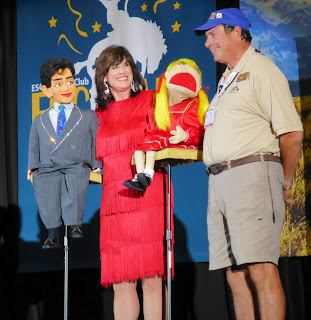 Patty Davidson was very funny and the first part of her show included dummies Dan and Lucy.  She invited Bob Pinner to the stage to "assist" in her act.  Bob, along with his wife Mollie, are the directors of this Escapade. 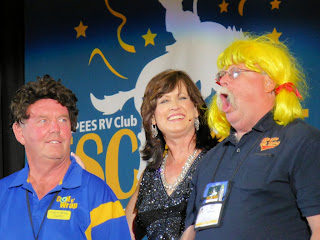 The closing portion of Patty Davidson's show again brought two folks from the audience.  "Smitty" of Coil 'N Wrap and Jim Guld (with the yellow locks) of "The Geeks on Tour", both vendors at the Rally, "played all" and were hilarious.

We enjoy the seminars and entertainment at rallies, but we certainly enjoy seeing old friends again and meeting new ones.  There is a very large group of "first timers" at this rally.  Enough for this evening.

Oh, I almost forgot.  Today is the end of our 6 month of fulltiming for us.   LOVING IT!


Thanks again for stopping by to take a look!

Email ThisBlogThis!Share to TwitterShare to FacebookShare to Pinterest
Labels: Escapees