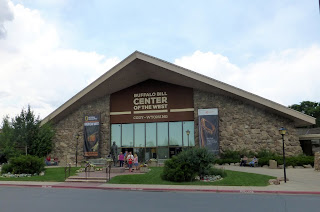 On Wednesday and Thursday we visited the Buffalo Bill Center of the West in Cody, WY.  For anyone who has ever been to this "museum complex" you'd understand why it took two days to see.  The Center contains all things western and is beautifully designed.  It is comprised of 5 different areas of interest to include: Cody Firearms Museum, Draper Natural History Museum, Buffalo Bill Museum, Plains Indian Museum, and the Whitney Western Art Museum. 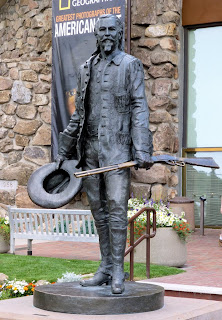 Because this facility encompasses so many things to see I've decided to break this blog into two parts.  It would be far too long to attempt to squeeze everything into today's blog.  The museum used to be called the Buffalo Bill Historical Center, but the name was changed in recent years in an attempt to broaden the scope of the center.  Still, "Buffalo Bill" Cody's influence is still very strong throughout. 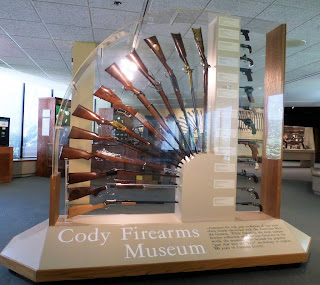 We first visited the Cody Firearms Museum.  The museum asserts that it houses the most comprehensive collection of American firearms in the world.

I would certainly not disagree.  I will say upfront that I am not a "gun nut" and and not that well versed in the history of firearms in this country, but all I can say is "WOW"!  This place holds the entire Winchester collection of firearms which was moved from New Haven, CT back in 1975 and has now become a permanent home for this collection. 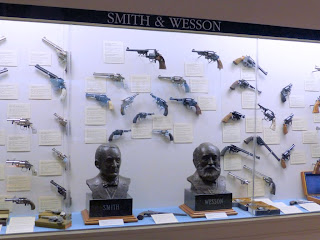 There is everything here from entire makers' collection of guns as in this handgun display of Smith and Wesson models................ to 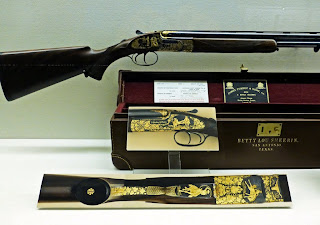 displays of Commemorative and beautifully inlaid works like this shotgun made by James Purdey and Sons of London, England in 1978. It is said to possibly be one of the most exquisitely decorated shotguns ever made. 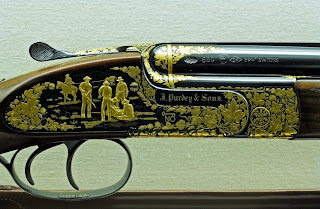 The gold inlay work and engraving was done by English master engraver Ken Hunt. .........to 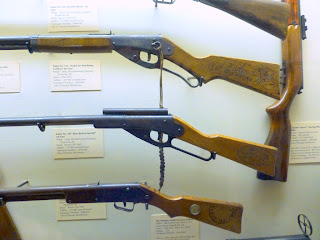 a very impressive display of both air handguns and long guns.  If anyone remembers the movie "A Christmas Story" where Ralphie couldn't have a Red Ryder BB gun because "he might put someone's eye out", here's the Red Ryder.

The firearms are displayed in cases depicting the growth of the United States from the Colonial times up through present day.  Special displays depicting weaponry used in different war times were very well done.  This collection is very impressive, even for those who are not well versed in the history and evolution of firearms.

The latter part of our first day was spent in the Draper Natural History Museum.  This section deals with much of the wildlife found in this portion of the country, and within Yellowstone National Park in particular. If you haven't gotten a chance yet to view the animals in the wild, then you can certainly find them somewhere in this gallery (even if they are stuffed and not too mobile anymore).
The design and layout of the displays is very well done.  The wildlife and natural land features were grouped in different "zones" beginning at the bottom floor (which dealt with elevations below 5000 feet) and worked its' way upward (literally) until you were examining features which occur above 10,000 feet.

The center is designed to be educational in ways other than just static displays.  Tours and special interest discussions are given throughout the day.  Just select one you're interested in and show up at the appropriate time and location.  We attended a very informative talk given by a member of the US Forest Service on "Hiking in Bear Country".  Because we were "easterners" for many, many years we never encountered bears as you might in this part of the country.  Be learned two essential things when hiking where one might encounter a bear.   Number 1:   Make lots of noise.  This will greatly lessen the chance that you will have an encounter with a bear to begin with and Number 2:  Carry bear spray with you and make sure it's accessible for quick deployment. 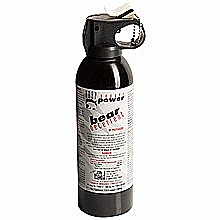 Well, we can definitely handle #1, but we have to buy some of the bear spray as we intend to do some hiking in Yellowstone Park next week.

That's it for the first day of our visit to the Buffalo Bill Center of the West.  I would advise anyone who comes to Cody to try and make time (preferably 2 days at least) to see this wonderful display.  Tomorrow, day 2 at the center.

Thanks for stopping by to take a look!
Posted by Steve and Karen at 2:22 AM