On Monday (7/22/13) we returned to Yellowstone Park to venture into the northern areas of the park. 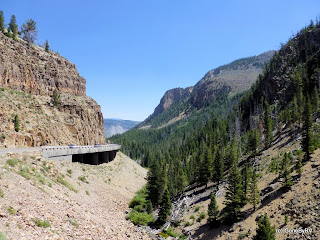 Our first pullout was an area called Golden Gate Canyon. This area was named for the golden look of the cliffs above the river below.  Today's asphalted bridge was originally a dirt stagecoach road built above wooden posts. At one time a tunnel was cut through the side of the mountain near today's bridge, but it collapsed and was abandoned in 1933.  Today's bridge was completed in 1977.

The main natural attraction in the Mammoth Hot Springs area is the Mammoth Hot Springs Terrace located above the "touristy" area. We actually missed the sign to the Upper Terrace Drive and turned around.  Sure glad that we did.  The geysers in this area are fewer than other areas of the park, but the springs other features are very large. 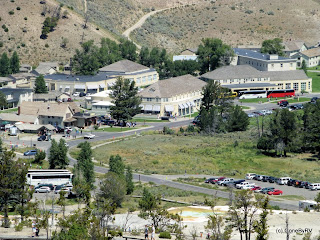 Traveling further down the hill we came to Mammoth Hot Springs. Two prominent complexes here are the Albright Visitor's Center and the Mammoth Hot Springs Hotel. We didn't spend much time here as we wanted to push on toward the Lamar Valley today and see some wildlife. 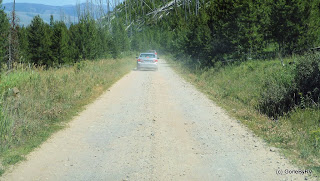 On the way east toward Tower-Roosevelt we came upon a 6-mile dirt (and very bumpy) road named Blacktail Plateau Drive.  I thought this might be a good drive to view some wildlife. Wrong!  We saw nothing. Other than dust from other vehicles. 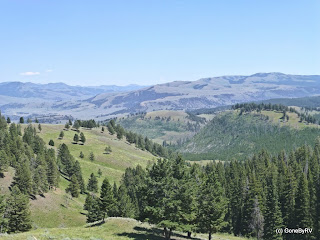 Actually, we stopped at some very nice pullouts with views of the surrounding valleys and mountain ranges to the north. 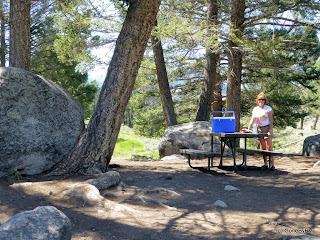 When we reached Tower-Roosevelt we turned north toward the Lamar Valley which eventually takes you to the northeast entrance of the park. We ate lunch at a nice picnic area near the Yellowstone River. 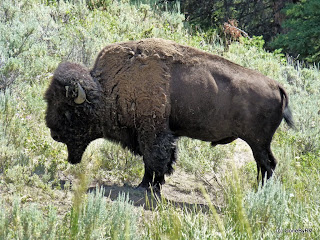 We are driving up to the Lamar Valley because this is supposed to be a "prime" area for viewing all types of wildlife which are present in the park.  Because we were in this area in the middle of the day, chances are much less than early morning or late evening of seeing a lot of wildlife. The old standby, the bison, can always be counted on!  We saw this one by himself on the side of the road. 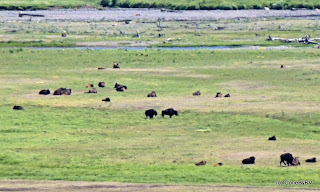 We did see a few elk, several pronghorn antelope, but again, many bison.  This picture only shows about 1/20 of the herd we saw in the valley today.

We returned to the Tower-Roosevelt area and began our trip home towar Canyon Village. Pretty tired today (and we didn't even do any real hiking!)  There is a fair amount of road construction in this area and waits of 20 minutes are not uncommon.  We finally got through the slow areas and took a picture of the valley near Dunraven Pass.  The sign indicated that grizzly bears are common in this area, but we have not seen any in the entire park yet.

That's about it for today's park exploration.