I can't believe that it's been since August of 2016 when I last posted a blog.  There's no excuse. I've just been darn lazy. When I last posted we were still in Red Bay, AL getting the damages to our coach repaired. Although we finished all of our work in a relatively short period of time we just "hung around" the area for awhile waiting to see several friends who dropped in from time to time.

We finally picked up the jacks and left on September 22 to begin our journey west toward our final winter destination here at Palm Creek Golf and RV in Casa Grande, AZ.

I'm not going to bore everything with all of the stops and details of our trek, but I'll just mention a few of the highlights along the way. 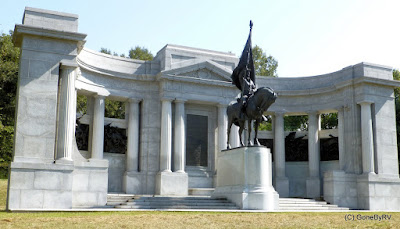 We stayed in Vicksburg, MS for a few days with our traveling friends Paul and Laura. This gave us both a chance to make sure that all systems on our rigs were working correctly and to visit the Vicksburg National Military Park. 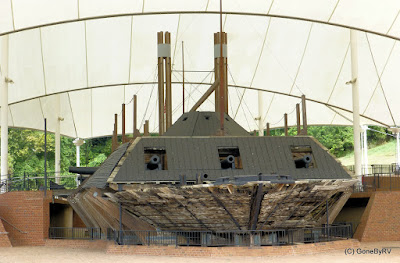 This park has more monuments to fallen soldiers from individual states (other than Gettysburg) of any park I've visited.  One very interesting section of the park housed the U.S.S. Cairo Museum.  The ironclad was sunk in the Yazoo River on December 12, 1862 and was re-discovered in 1956. It was raised, restored, and re-located to its' present location and is the only remaining example of this type of vessel in existence. 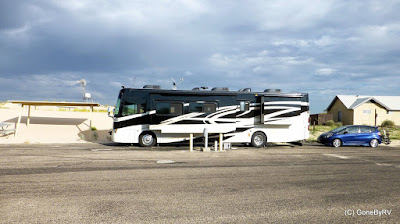 We continued into Texas with Paul and Laura and finally split up to allow them to visit some friends before we would meet up again in Casa Grande, AZ.  We overnighted in a neat little Texas State Park named Monahans Sandhills State Park. It was water and electric only, but we were only here for one night (wished now that we had stayed for a couple of days to explore). 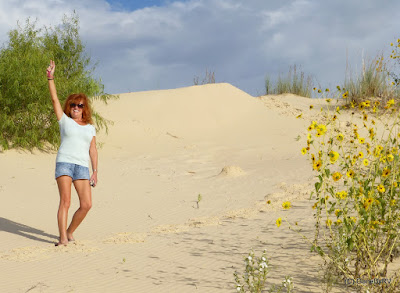 The sand was so white and soft that you would have thought we were at the beach. Very cool in the middle of Texas.

We usually begin our winter stay at Palm Creek (this is our 4th year now) in the middle of October, but Karen was having a problem with a tooth so we hurried back a bit sooner to get to our local dentist. We arrived in Casa Grande, AZ on October 2nd this year!

We like Palm Creek Golf and RV Resort so much that last season we decided to sign a 2-year annual lease agreement. The advantages to us were that the park would construct an 10x12 shed with electricity and water hookups plus give us a monetary credit for the first year.  Because we knew that we would be coming back for at least the length of the commitment it was a no-brainer for us.  The only negative is that we continue to pay during the summer months when we're not actually here. 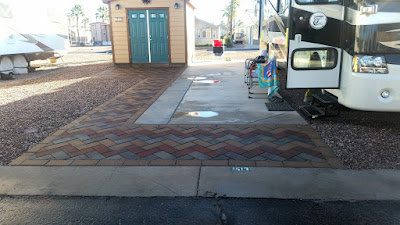 When we arrived this year we decided to have a bit more concrete patio installed, along with some brick pavers to make the site a bit more useable.  To help offset the costs of these additions, we decided to do our first ever workcamping since becoming fulltimers.

We took a job in "Special Events" with the Park.  Little did we know that this job is somewhat of a catch-all, because Palm Creek has a lot of special events.

Without getting into all of the events we've setup for, worked, and then torn down afterwards, here is a look at one of our first events, the Palm Creek Fall Festival. It is the first "welcome back" get together held in November. Every one of those tables and chairs are positioned (and then removed) by the Special Events Team. 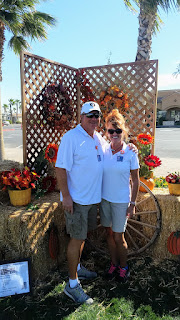 Here we are in our outdoor "uniforms" before the Fall Festival began.

Back to the fun stuff.  In November, Palm Creek Golf and RV again hosted the USAPA National Pickleball Tournament.  My partner from last year, Bill, and I again played in the Nationals.  Definitely no medals from that event, but since we both were moved up to the 4.0 skill level this year we both learned a lot and had a great time. (Sorry, no photos on this one.)

In January we decided to leave the comfort of FHUs in Palm Creek and venture out into the desert of Quartzsite, AZ to attend the 2017 OOBerfest. What is OOBerfest you might ask?  It's an informal gathering of friends who follow a blog called Outside Our Bubble created by David and Brenda Bott. They happen to own a Tiffin motorhome as well, but that is not a requirement for attending their OOBerfest gatherings.  For full information and some great drone videos take a look at David's posting on the event. 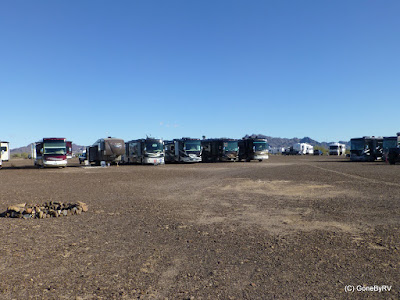 I'm not sure of the final count, but it was somewhere in the mid-70 count.  There were about 100 rigs who had made initial commitments, but the weather might have kept some away.

As is typical of RVers who gather, there is usually a potluck dinner. There was certainly no shortage of good eats here. 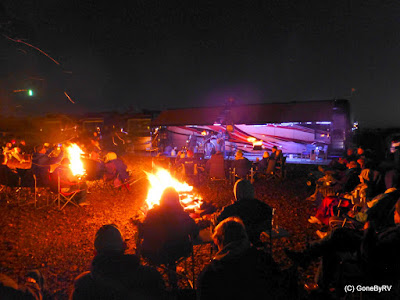 On Saturday night, David and Brenda had arranged for a local band Notes from Neptune to entertain the crowd under the stars. Several large bonfires were built (it does get a bit chilly in the desert) and everyone seemed to have a great time. 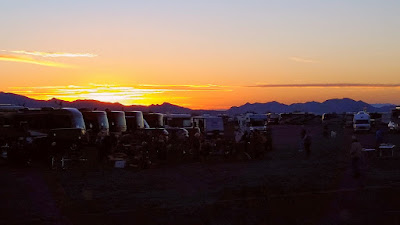 Being in the open desert always provides for spectacular sunsets. One day while in Quartzsite we decided to do a short bit of hiking. Something we both enjoy, and something we had not done in some time. We drove a few miles south of Quartzsite and visited the KOFA National Wildlife Refuge. 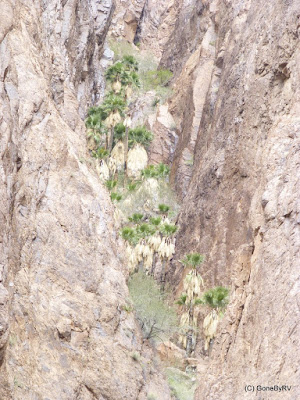 An interesting reason to visit this area is to see the California Fan Palm, which is the only palm native to Arizona.  There are just a few remaining, but a short hike up the trail revealed some up in the crevices of the rocks. 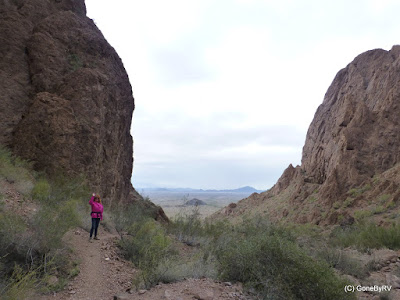 I'll have to admit that the palms sighting was not my favorite, but the views both in and out were certainly worth the hike. 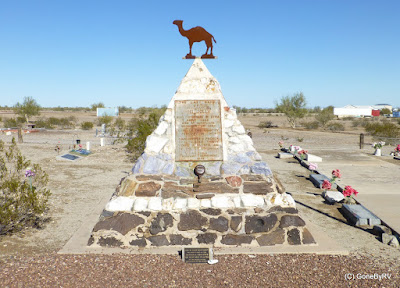 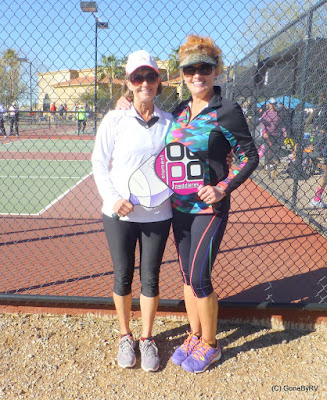 After getting through all of the holiday season events (which meant a lot of work for Karen and I), the work load has lessened somewhat and the real start to the pickleball tournament season has begun. Karen is partnering this season with Debi, who is the wife of my partner Bill.  They played in their first tournament together over at Mission Royale and, although they didn't medal, played well together. 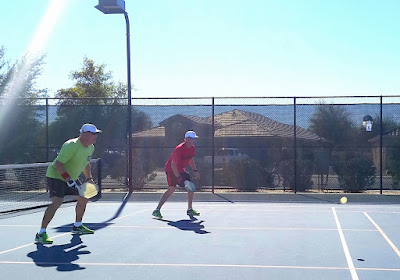 Bill and I didn't medal either, but we had a good time.

Just a few weeks ago we had our annual Palm Creek Members' Tournament.  Debi and Karen played together again and won the bronze medal for their skill/age group. Way to go ladies! (It must have been all of that drilling provided by their husbands.  LOL) 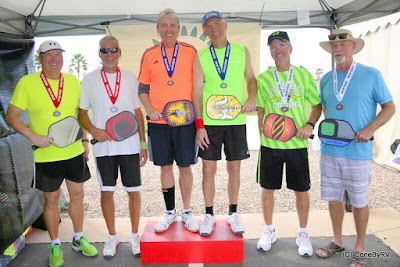 I was able to win a silver medal with Rick in the Men's Doubles 4.0, Age 50-64 Group.  My regular partner Bill took the gold medal with his mixed doubles partner Vera.  All of our little group won medals, so we were happy picklers!

Hopefully, that catches up the blog for a bit without being too wordy. I had to use a lot of restraint to keep this blog as short as it turned out.
My goal is to attempt to write more often this year, but I make no promises.