Driving the Beartooth All American Highway

Saturday we drove north out of Cody to drive the approximate 68 miles of the All American Beartooth Highway.  The road is US212 and runs from just east of Cooke City, MT (near the northeast entrance to Yellowstone Park) and ends west of Red Lodge, MT. The road is presented as the highest paved road in the Northern Rocky Mountains.  The highest advertised elevation is 10,947 feet at Beartooth Pass. 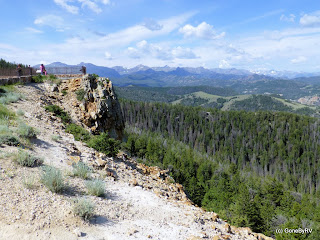 The trip from Cody on the Chief Joseph Scenic Highway to the start of the Beartooth Highway also contained some beautiful views as well.  Here we are at a mere 8000 feet at an area called Dead Indian Hill Summit. 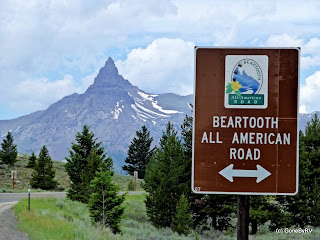 Finally we arrived at the start of the Beartooth Highway. 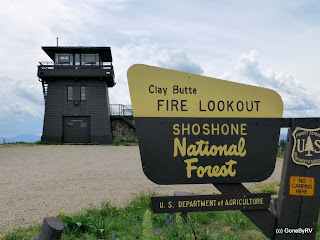 The first stop (of many) we made was at the Clay Butte Fire Lookout station. The station was built in 1942 by the CCC and was used until the 1960's when aircraft surveillance proved a better tool for fire detection. 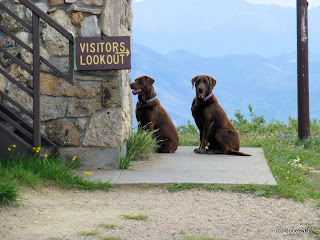 There is a US Forestry Service employee which mans the tower now to answer questions and speak about the history of the tower.  The 360 degree views from the tower are beautiful.  Obviously, more than humans were waiting this day to visit the tower.

Turnouts are frequent along the Beartooth Highway and you could spend many hours completing the route. As we neared the top of the driving route, our stopping was very frequent for views such as the ones depicted in this collage. 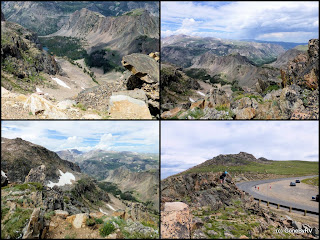 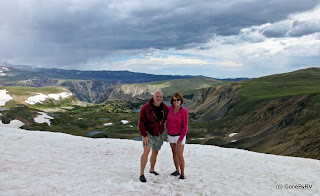 Now near the top, many of the snow fields have yet to melt.  This was a pretty crowded pullout as everyone wanted to get a picture of themselves walking in the snow in the middle of July. 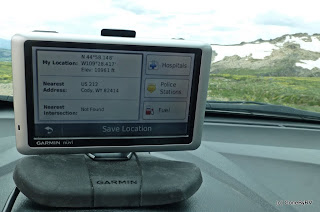 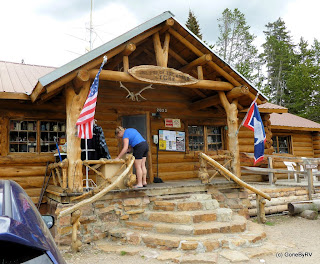 After leaving the peak area we continued east and came to a little store called "Top of the World Store". At the suggestion of another blogger (sorry, I honestly cannot recall which one) we stopped in to purchase a couple of their homemade muffins.  Excellent choice!

We made a stop in a US Forest Service campground with the intentions of eating a picnic-style lunch we had packed, but the mosquitoes were so bad that we finally decided to eat in the car (forgot the mosquito repellent). Yeah, we're prepared for anything. NOT! 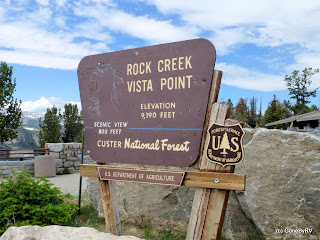 Continuing on we dropped in elevation and arrived at the Rock Creek Vista Point pullout.

There was a short walk to a point overlooking the surrounding valley and rock walls.  Again, a beautiful area to stop and take in more pictures. 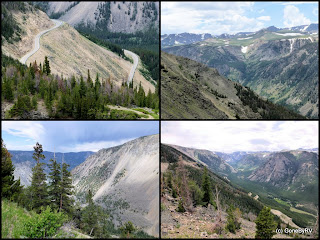 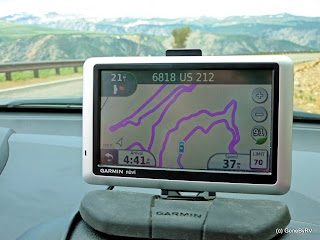 Here's how the Garmin GPS depicts the Beartooth Highway much of the time. Oh, the curves are really that tight.  YES THEY ARE!


Believe me, it was tough not to go crazy posting pictures for this day's blog, but I know that "vista and panorama" shots do tend to get boring. We don't want to lose all of our blog readers.

Thanks again for taking the time to take a look at our blog!