Here was our journey into Yellowstone and Grand Teton National Parks yesterday. 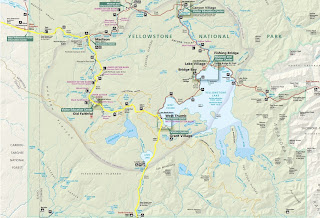 Let me start off by saying that these are BIG parks to explore.  I'm glad that we have many more days in the area to return at a leisurely pace.  Our original intention yesterday was to just visit the area between Madison and West Thumb. We eventually arrived at the Old Faithful Visitor's Center area around 1:30 PM and it was a "zoo".  We couldn't even find a parking place.  After a few quick minutes we decided to return to this area another day and push today into Grand Teton NP. 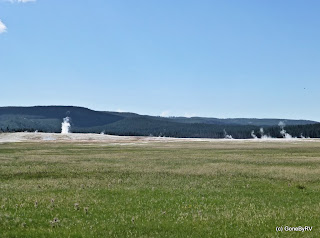 We had never seen geysers or areas of geothermal activity such as is prevalent in Yellowstone NP.  This was our first glimpse as we neared the Lower Geyser Basin.  We pulled into an area named Fountain Paint Pot to begin our first of many walks on the boardwalks. 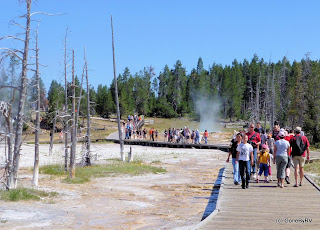 We were quickly joined by many, many tourists who apparently had also not seen geysers and fountains before.

As in all of these delicate geothermal areas, walking on the boardwalks are essential for the preservation of these areas and for the safety of the visitors. Some of the ground "crust" is very thin and the very real threat of breaking through the surface layer is a very real concern.

The Fountain Paint Pot Trail showcases several different types of geothermal features.
We moved on down the road to Biscuit Basin.  Some of the colors in these geysers are amazing. 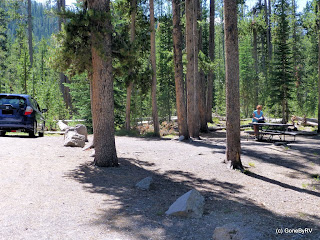 By now, it was time to stop for lunch.  We've learned to pack a small lunch on days when we're doing a lot of driving.  There are literally picnic pulloff areas everywhere throughout the park. Glad we weren't pulling the MH, however.

After lunch, and our failed attempt to visit the Old Faithful Area today, we traveled to the West Thumb Geyser Basin.  I actually felt this was one of the most interesting areas we saw today. This area is above Yellowstone Lake and two of the geysers (Fishing Cone and Lakeshore) are actually in the water. 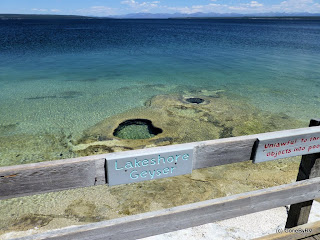 Lakeshore Geyser is under the water. This geyser boils vigorously and erupts a few feet from time to time, but the last known major eruption was in 1970. 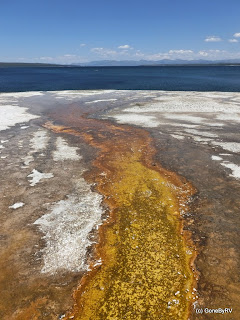 Micro organisms are evident in many of the geothermal features and give the beautiful colors observed running along the surface and in the geysers. Here they are seen flowing into Yellowstone Lake. 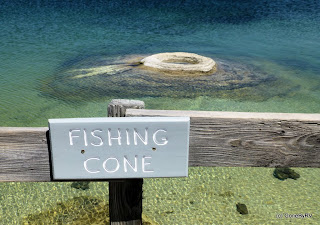 Fishing Cone has an interesting history. Old explorers told of an alpine lake where a trout could be caught, then the pole could be swung around, and the fish cooked in the boiling water of this geyser. During the 1870 Washburn Expedition visitors had pictures taken of themselves straddling the "Chowder Pot" or "Fish Pot". Injuries to people, as well as damage to the edges of the geyser, resulted in the ban on this activity.  When exposed, the temperatures of the cone's water averages just above 199 degrees. 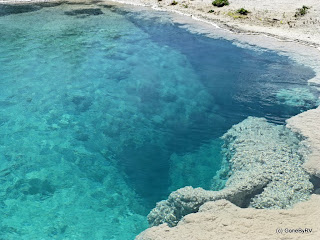 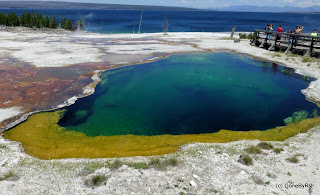 The last interesting geyser in this area is called Abyss Pool.  It is one of the deeper hot springs in the park at 53 feet. Abyss Pool first erupted in recent history in 1987. By 1992, it would erupt in a series of explosive bursts sometimes as high as 30-80 feet. The feature has not erupted in that manner since 1992. 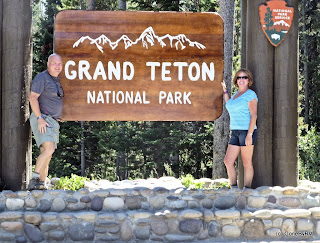 Since we were now toward the bottom of the "Figure 8" loop, also known as the Grand Loop, we decided to drop down into Grand Teton NP. It's only about 10 miles to the entrance and we weren't sure if we'd get a chance to get over this way again.

Grand Teton NP has no where the number of "touristy" things to see, but it still has natural beauty everywhere, and oh yes, the Grand Teton Mountain Range.  We stopped in at the Colter Bay Visitor Center and watched an excellent National Geographic film on the re-introduction of wolves into Yellowstone Park. This visitor center is adjacent to Jackson Lake and has a nice marina.  Beautiful views of the mountains are observable in this area.

By this time, evening was closing in.  By the time we got back to Yellowstone NP it was already 8:00 PM.  We wanted to visit one other area in the Midway Geyser Basin before leaving as it was too crowded earlier in the day. 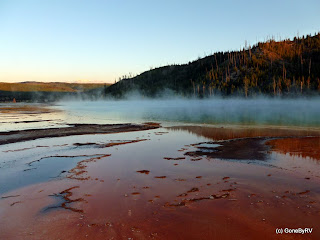 I'll just show a few pictures of this area without comment, but suffice it to say that it looks very different from the middle of the day when the sun is high overhead. 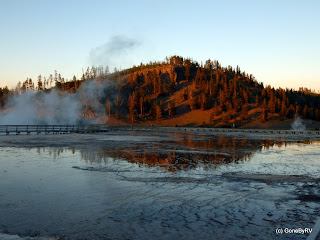 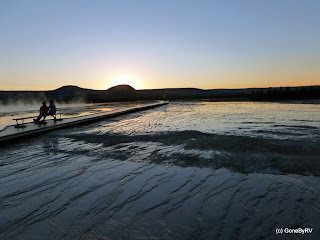 That's enough for this blog.  Thanks for taking the time to drop by and take a look!
Posted by Steve and Karen at 11:58 PM