Summary of the 53rd Escapees Escapade

The 53rd Escapade concluded on Thursday evening with the closing ceremony which included a birthday dinner (35th year of the Escapees RV Club). As is normal at anything "RV", when the activity includes food, the people come out early.  The ceremony actually began at 5:30PM, but the doors opened at 5:00PM.  As a result folks were standing in line waiting to get in. 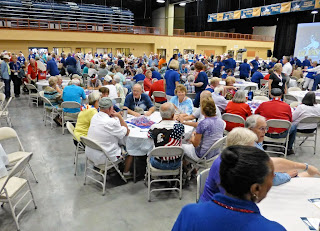 Once inside, folks again got a chance to visit with old and new friends before the ceremony began.  I can't over emphasize the friendliness of the folks at this rally.  We met new friends every day of the week.

Before dinner, several addresses were given by the current and future Escapade directors, and because this was a special birthday anniversary for the Escapees RV Club, Cathie Carr (Escapees President), also reflected on the early days of the club. 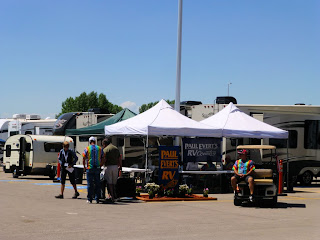 The dinner followed and was sponsored by Paul Evert's RV Country.  Their company also brought a large number of MHs, 5th wheels, and trailers to the Escapade for folks to examine (and hopefully purchase).

Thursday evening concluded with a fireworks display put on by the city of Gillette at the Camplex facility for the citizens of Gillette (and the Escapees since we had "ring side seats" in our rally campground at the Camplex).  Unlike the FMCA Rally held a few weeks ago, we had not had a drop of rain all week.   That is, until it was time for the fireworks display.  They were due to begin between 9:30-10:00 PM, but the rain and winds started just before that time. Apparently, the Gillette fireworks had to be cancelled in 2012 due to the dry conditions, so this year's show was to be even bigger than normal.  This year the fireworks went off as scheduled.  After watching for a few minutes, we "wimped out" and went back inside the MH due to the rain.  The show was very good and lasted almost 30 minutes.

A bit of review for the week:  We attended several seminars each day throughout the Escapade.  Subjects ran the gamut from "RVing to Alaska" to "Buying LED Lighting" to "Realities of the Fulltime Lifestyle". We enjoyed all of them and learned many new things.

Each evening we gathered again in the main event hall and were treated to some type of evening entertainment.  The entertainment was preceded by the nightly drawing of door prizes donated by local and national companies.  There was a large number of door prizes given away.  We were fortunate to win two of these.  Scott and Karen Bonis were in charge of the door prize giveaway each evening and to provide a bit of "comedy" in the process.

A very fun event was "Ham-O-Rama" (talent show) held on Wednesday evening. It was amazing how much talent the group has. Talents ranged from a puppeteer, to guitar players, to singers, to duos singing and playing. 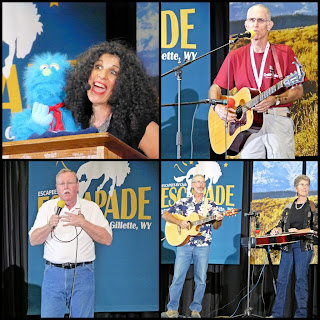 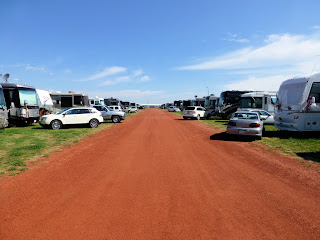 I almost forgot to speak about the campground facilities at the rally.  We've been to several rallies held by different groups throughout the years.  The facilities here at the Camplex are quite good. The campsites are laid out in a logical fashion.  Parking in the Boxelder section is on grass with gravel roads running down the rows of rigs.  Hookups are solid with 30 amp electric with good voltage, good water pressure, and sewer at each site. 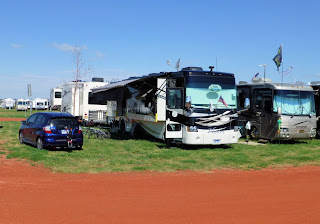 Sites are usually close to your neighbor due to the nature of the event, but we were lucky to get an end side which afforded us a nice place to park the Honda and to unfurl the awning and sit outside.

If it sounds like we had a good time, you'd be correct!  We learned new things, met new friends, caught up with some friends we'd met in the past, bought a few items which we just had to have from the vendors and had a really "fun" time.

If you ever get a chance to attend an Escapees Escapade I'd highly recommend it.  You'll be warmly received and welcomed even if you've never attended one before.  We are already planning on attending the 54th Escapade which will be held in Goshen, IN May 12-17, 2014.

Email ThisBlogThis!Share to TwitterShare to FacebookShare to Pinterest
Labels: Escapees