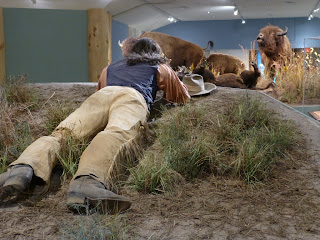 Thursday we finished our visit to the Buffalo Bill Center of the West in Cody, WY. Because William F."Buffalo Bill" Cody is essential to the history of Cody, WY, an entire hall is devoted to his life and accomplishments.  In his early life Cody gained notoriety as a scout and guide. During this period he also picked up his nickname of "Buffalo Bill" after the American Civil War when he had a contract to supply Kansas Pacific Railroad workers with buffalo meat.

Many artifacts from Cody's family life are on display. It was apparent from reading several of the items belonging to Cody's wife Louisa Frederici Cody that she was not happy that Buffalo Bill spent much of his time away from his family during the years when Cody was touring and promoting his Wild West Show.  Cody had four children with Louisa.

Kit died of scarlet fever in April 1876, and his daughter Orra died in 1883.  Buffalo Bill was very fond of his youngest child, Irma, and  eventually built and named the Irma Hotel in Cody, WY after her in 1902. The Irma Hotel is still very active today. 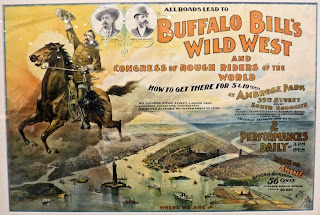 A large display area is devoted to  Cody's Wild West Show and set-up during its' time in New York City. 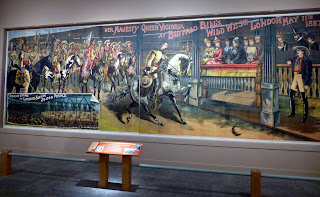 Cody formed the Wild West Show in 1883 and toured the US and Europe for the next thirty years. At the turn of the twentieth century Cody's name was known world wide.  He took his entire show overseas and played for Queen Victoria.  The museum possesses what it claims to be the largest outdoor poster for Cody's Wild West Show in London for 1887.

Before the museum I will admit that I knew very little about William "Buffalo Bill" Cody.  Afterwards, I've decided that I'd like to do some more research and learn more.  He seemed to have been a very interesting character. Quite a promoter! 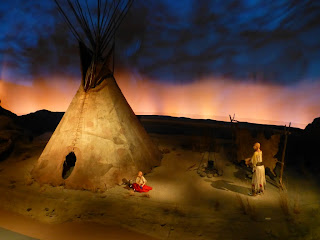 The next portion of the museum is dedicated to the Plains Indians.  Many display items are dedicated to the history of the tribes in this area of the country. We are shown artifacts belonging to the tribes from long ago, then shown how and where they were relocated to reservations, and finally displays show the life of the Plains Indians during modern times.   A really nice display shows the daily life of a tribe as the seasons change.  Audio and visual props are used in a 2-story gallery setting.

There are many cases displaying the beautiful bead and feather work done by many of these tribes. 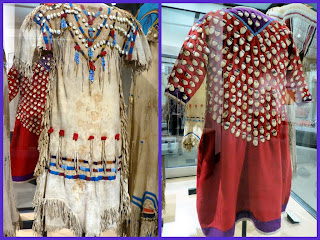 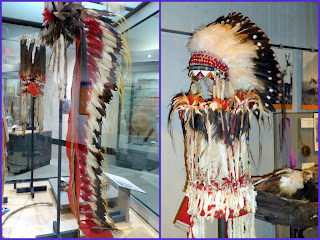 We took a little break from looking at static displays and attended one of the Center's educational programs given daily. This one was called Relaxing with Raptors. Two handlers led an informal discussion about 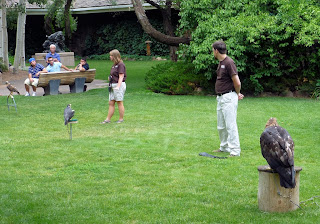 some of the birds common to this area.  All of these birds were "rescued" after being involved with car accidents or other maladies.  Their physical conditions are such that they would not be able to survive in the wild if released again.

The final portion of the museum is called the Whitney Western Art Museum. Contained within it are bronzes, 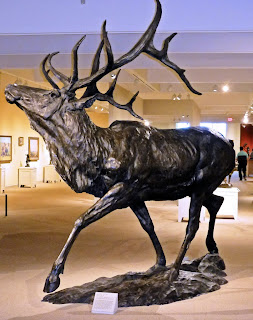 paintings, sculptures, and castings for bronzes centered around "all things western". I will not pretend to be well versed in art, but I know what I like when I see it. 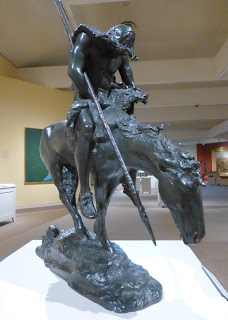 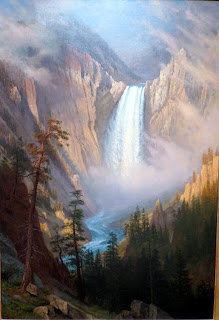 and paintings like "Lower Yellowstone Falls" by Albert Bierstadt. 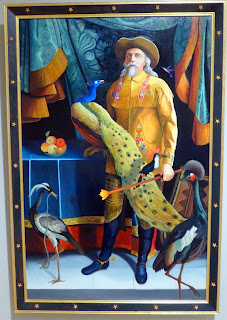 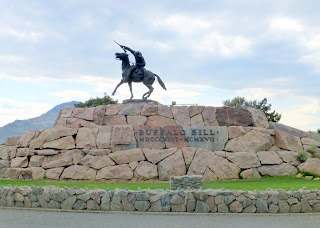 Perhaps one of the most recognized of western art pieces actually resides outside the museum.  The large bronze entitled Buffalo Bill-The Scout was created by Gertrude Vanderbilt Whitney in 1924 and became the corner piece of what would eventually become the Whitney Western Art Museum.

Trust me, I have only scratched the surface of what's held in the museum's collection.  I would advise anyone who would like to visit the museum to allow at least 2 days. For someone interested in the fact and folklore of the West, this is the place to come!