Posted from near Gloucester, VA (Thousand Trails)
Click on Pics to Enlarge

About a week ago we made our annual pilgrimage to Red Bay, AL.  Red Bay is the home of Tiffin Motorhomes and we like to re-visit the service center from time to time (hey, it's not that bad here, really!)

On this trip we had several items which were pre-planned such as having our entrance steps replaced at the Tiffin Service Center and having our annual maintenance on the coach performed at Bay Diesel (a local shop in town).

After getting up on the ladder and taking a closer inspection, I decided it was time to replace all four of our slide toppers as well. 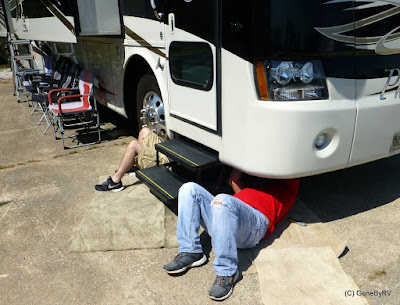 We arrived on a Saturday and dropped off our request for the entrance steps to be replaced over at the Tiffin Service Center.  Early on Monday morning, two techs arrived at our campground site (Downtown RV Park) in Red Bay to take a look. They advised that the steps could be replaced at our site without having to wait to get into a service bay.  Excellent!

A bit of background explanation is needed here as to why the steps are being replaced to begin with.  Our coach originally had Coach Steps by Lippert as OEMs.  It seems that the Coach Steps had a little problem with a main bolt breaking which allows the steps to drop and swing freely possibly causing serious injuries to someone who might be using them at the time. It turns out that this wasn't such a small problem as NHTSA got involved and forced a safety recall for certain model years of MHs (not just on Tiffins).  If you have this step on your MH, you might want to check with the NHTSA site (for Tiffin, the recall number is #15V-880), or with your coach manufacturer for the recall.
The involved Tiffins are as follows:
2007-2010 Allegro Bays
2008-2015 Allegro Open Roads and REDs
2008-2015 Allegro Buses
2008-2015 Phaetons
Any of these rigs manufactured between May 25, 2007 and December 18, 2014 are involved in the recall.

The "fix" which Lippert was allowed by NHTSA was to install a bracket beneath the fan gear (beside the motor) which would catch the assembly WHEN the bolt broke.  I wasn't too thrilled by their solution, so when I heard that Lippert was giving a $200 credit if the end user wished to get rid of the old steps altogether and have the Kwikee brand of steps installed, this is the option I chose. 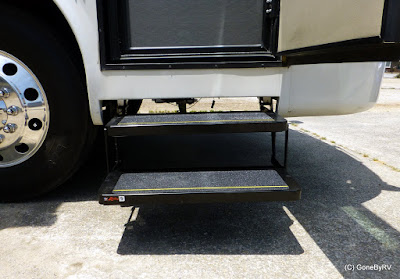 The new steps were quickly installed and thus far have operated MUCH smoother and QUIETER than the previous Coach Step brand ever did.  I'm pleased at this point.  Trust me, I'll make another post in the future if these too turn out to be less than stellar.

Our next pre-planned order of business was to have our routine chassis, engine, and generator annual service work performed at Bay Diesel. I've used this company every year since we purchased our coach when in Red Bay. I don't necessarily think that they do any jobs FAR better than another business could, but I like the idea of being able to be in the bay (and under the rig) while the maintenance work is actually being performed.  It gives me a chance to observe their work and ask questions at the same time. 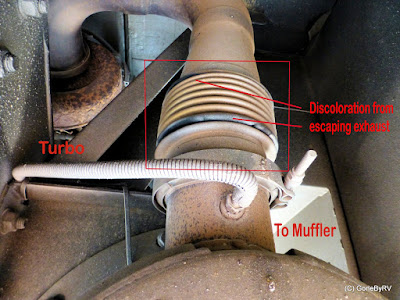 Everything was going smoothly until one of the techs called me over to "take a look at this".  That's never a good thing to hear. It turns out that the exhaust pipe connecting the output side of the turbo to the muffler was broken.  I don't know if this occurred very recently or not as I had no warning that something had broken.  There was no audible exhaust leaking sound at this point. This is called a "flex" pipe because of the accordion style of construction in the pipe which allows for a bit of movement as the engine torques slightly from side to side. 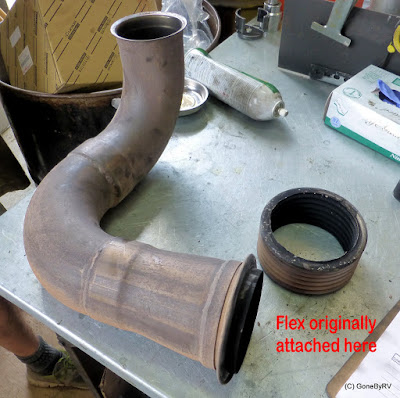 In the above picture you can see just faint signs of exhaust escaping as evidenced by the black soot on the upper and lower portions of the flex pipe. Once removed and placed on the bench, the flex part of the pipe broke away easily. 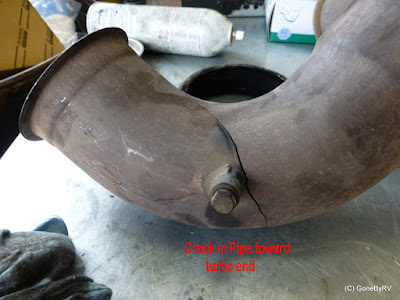 We flipped the pipe over and a large crack was evident in the solid piece of the pipe.

I've already come to realize that anything on a MH chassis is expensive, but the replacement price for this pipe floored me.  Just the part itself was over $700.  WHAT!!
Chris Morrow is the owner of Bay Diesel and advised that he had seen similar breaks on Allegro Buses. 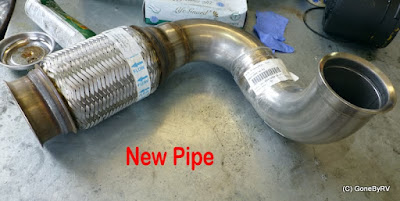 He contacted Tiffin on my behalf and was able to convince them to pick up all except $250 for the part and 1 hour of labor for installation. There appears to have been some known problems with this pipe as the new pipe uses an entirely different time of braiding in the flex area. This was an unexpected cost, but I was happy that the repair was made while we were here in the shop versus on the side of the road somewhere.


The next planned item on our list was to replace all six of the tires on the motorhome.  It truly hurt me to replace tires with plenty of tread remaining and absolutely no signs of sidewall cracking. Our rig's tires would have been seven years old in July of 2016, so I wasn't willing to gamble on riding out the old set a while longer.  The OEMs were Michelins, but after some research on the internet and consulting with many fellow Tiffin owners whose opinions I trust, I decided to switch to the Toyo brand. 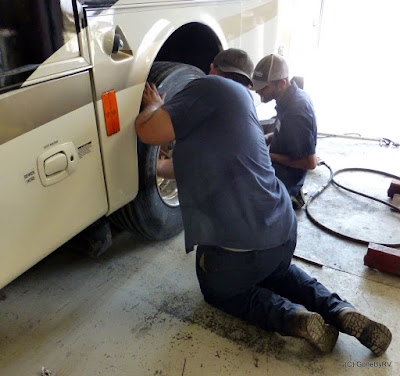 I haven't had them long enough to make a fair comparison yet, but the ride is no different from the Michelins and the price was definitely better than the Michelin cost (even with the FMCA discount).  The best part of the entire re-mount was that I now have outward facing valve stems on the outer rear duallies and I installed one piece valve stems on the inner duallies sold by a company named Your Tire Supply.  I had always had a very slow leak on my right rear inner tire and I attribute it to the valve extension on that tire. Access to fill all of the tires is now quick and easy.

Not directly related to the motorhome, but a part of our cash outlay while in Red Bay was the replacement of all four tires on the Honda Fit.  We had these installed at the Costco at Barnes Crossing near Tupelo, MS.  The tires had over 62,000 miles combined driving and towing. 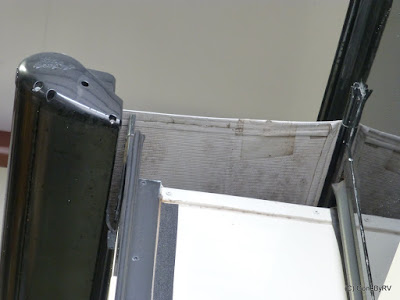 The last item that we wanted to get done while in Red Bay was to have Brannon Hutcheson of Custom RV, Inc. install new slideout toppers on all four of our slides.  The originals were made by Carefree of Colorado and were definitely showing their age. I had patched several small tears in the edges and the large DS slideout topper was beginning to show evidence of the fabric letting water thru. 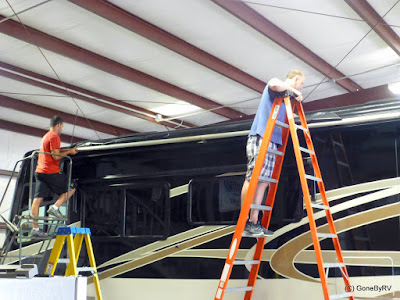 Brannon and his assistant (John or Jason, sorry for my lack of memory) made quick work of the job as usual.  We've had several modifications done by Brannon and he always is efficient and does excellent work. 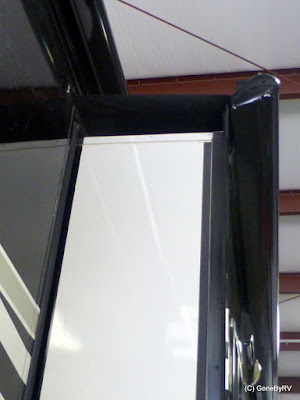 We decided to change the original topper color to a black this time around after looking at some of the new coaches.  I like the look as the topper seems to disappear over the slideout.

Well, that completes our list of planned, and unplanned, work done while we were in Red Bay. Here's a re-cap of the actual costs.


Hopefully, a few of these larger ticket items will not need to be replaced for several years. I mainly wrote this post for folks new to the RVing lifestyle or those thinking of becoming fulltimers someday.  The purpose is to show the need to budget for items such as these (and more) because repairs and sometimes modifications need to be done.