On Friday we decided to visit the Nebraska state capital building in Lincoln.  It's about a 55 minute drive west of our present location and was an easy drive along Interstate 80.  Our recent experience with the visit to the Kansas capital building in Topeka has a thinking about visiting as many state capitals as possible when we are relatively close in our travels. (As an aside, I lived in Virginia for 54 years and NEVER once visited our state capital in Richmond, but now that we're free to travel I'm certain that we will put it on our list on one of our trips back east.)

The architecture both inside and out of the capital in Nebraska was very different from Kansas, but very pretty in a different way.  Lots of art work inside and beautiful mosaic tile work throughout.

If you were able to see the building from directly above, the shape would look like a square connected by a cross.  The tall domed section in the center is adorned at the very top by "The Sower".  This is a 19 1/2 foot figure positioned on a 19 1/2 foot base which stands 400 feet above the ground. "The Sower" represents casting the seeds of life into the wind.

Nebraska's government is somewhat different from many states in that it is a unicameral system vs. a bicameral system (House and a Senate).  I'm not sure which system is better or more efficient. This building represents the third capital building for the state of Nebraska and was constructed between 1922-1932. At that time, Nebraska still used a bicameral system. This is a picture of the hand carved wooden door which led to the old Senate chamber.

Here is a look at the current unicameral chamber which houses the entire legislative body.

The Judicial Branch (State Supreme Court) is also housed in the southern end of the Capital.  The public is invited to attend when the court is in session, but once the relatively small gallery is full the doors are closed. The proceedings are also televised.

The acoustics are so good in this chamber that microphones are not needed.  Part of the secret lies in the construction of the ceiling.  It is all walnut  and beautifully crafted. It's hard to see in the picture, but the recessed areas in the "boxes" of the ceiling are at least a foot in depth.

I realize that this blog is beginning to take on the length of a novel, so I'm going to just post some pictures with captions.

There are many paintings and murals on the walls and floors which represent the history and ideals of the people of Nebraska. 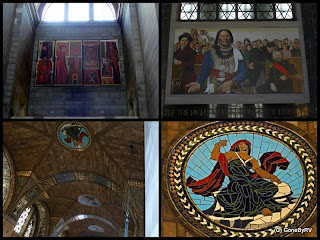 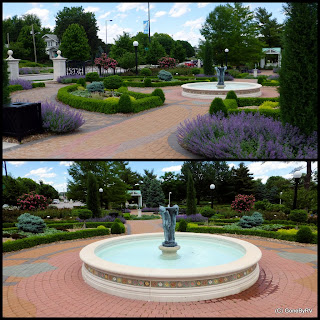 After leaving the Capital building we traveled a few blocks looking for an area called the "Sunken Gardens".  We had the address, but for some reason couldn't find it initially. We did find this "neat" little area beside the Zoo named the Hamann Rose Garden at Antelope Park.  This place had a huge variety of roses, but we weren't there at the right time of the year to see them in bloom. 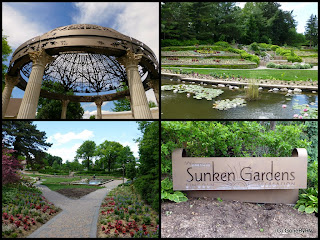 Finally, we stumbled onto "The Sunken Garden" which happened to be across the street. Literally! I guess we missed it because it was sunken. (Sorry, bad joke here.)


Thanks for reading this far on a rather lengthy blog post.

As always, thanks for dropping by to take a look!
Posted by Steve and Karen at 11:43 PM