You're probably thinking what does "Drive-In Theater and Mount Rushmore" have to do with one another. Answer:  Absolutely nothing, other than those two places are our latest places to visit.  On Monday night we drove over to Roys Black Hills Twin Drive In Theatre, just a short 3 mile drive from our campground, to watch the double bill of "Man of Steel" and "42-The Jackie Robinson Story".  We hadn't been to a drive-in theater in a long time and it was really fun.  What's unusual about this drive-in was that it is brand new and just recently opened.  In a day when most drive-ins have closed, it was "something different" that most of the younger generation probably has not experienced. 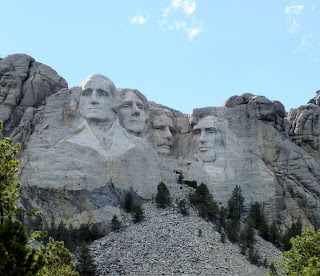 Okay, moving on!  Tuesday we decided to drive over to Mt. Rushmore.  We wanted to get there later in the day to attend the evening lighting of the Monument which starts at 9:00 PM this time of the season. What can I say about Mt. Rushmore. It's one of the nation's iconic monuments.  This was our first view of the Monument from a distance. If it doesn't evoke a feeling of patriotic emotion, then something's just wrong. 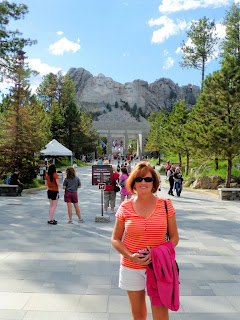 This is a very popular spot to take a picture just before actually entering the Monument grounds from the parking area. (Soap box time for a moment. There is no admission fee to enter the Monument, but it will cost you $11.00 per non-commercial vehicle to park.  Oh well, the experience was certainly worth it.  Climbing down from the soap box now.) 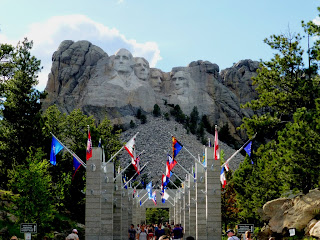 This area is named the "Avenue of Flags".  Each state's flag is represented and the date the state was brought into the Union is inscribed onto the column. 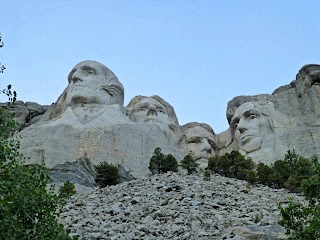 Gutzon Borglum's studio was interesting to tour.  Mr. Borglum's work began in 1927 and he was the initial sculptor of the faces on the Monument, but died before the completion of the project.  His son, Lincoln Borglum, took over the project in 1941. Original plans called for depicting the presidents from head to waist, but lack of funding forced construction to end in late 1941. 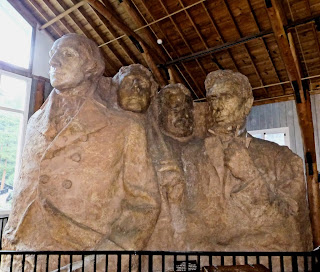 Gutzon Borglum's working model can be observed in his studio.  The model is exactly 1/12 scale of the figures on the mountain. 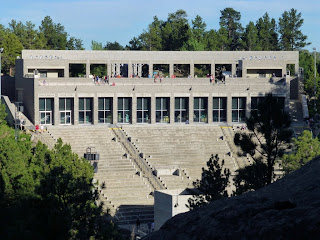 We returned to the amphitheater to find seats for the evening lighting ceremony of the Monument. The program begins with a Ranger giving a short inspirational talk on the U.S. Constitution, then a 20-minute film is shown encompassing the growth and ideals of the United States through the years, and a short segment on the construction of the Monument.

The program concludes by the Ranger inviting all veterans and active-duty military personnel to take the stage for a very moving rendition of the Star Spangled Banner followed by a ceremony to lower and fold the United States flag. 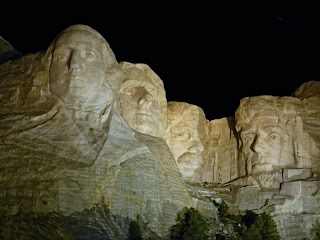 Although the Monument is very inspiring to visit in the daylight, it's even better at night.  The monument is slowly lit towards the end of the above described program. The faces silhouetted against the dark sky is very moving. 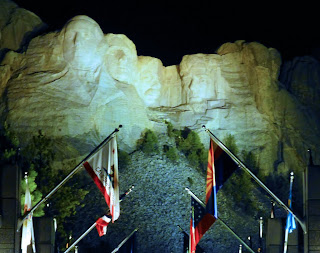 Even the "Avenue of Flags" looks better at night. For anyone who has never had the opportunity to visit one of our country's truly iconic and emotionally moving monuments, I would encourage you to make plans!


Thanks again for taking a look at our blog!
Posted by Steve and Karen at 1:55 AM