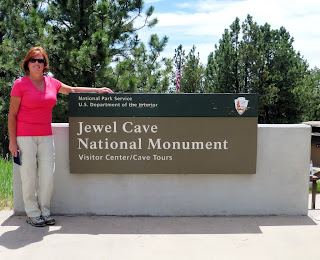 Yesterday we drove west through Custer, SD and stopped at Jewel Cave National Monument to do some exploring. The Park Staff offers several levels of cave tours ranging from a short, orientation tour to a "wild caving" tour which takes approximately 4 hours and explores the cave by traveling off trails and is guaranteed to "get you dirty".  We decided to take the middle road here and take the Scenic Tour. That tour lasts approximately 1 1/2 hours and is led by a Park Ranger traversing through the cave via stairwells, ramps, and flat platforms. 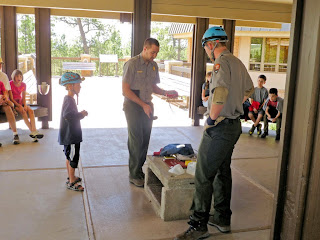 While waiting for our tour to begin two of the "wild caving" tour Rangers gave a brief talk on the equipment needed for caving. A demonstration (using a smaller child) was shown because persons taking this tour will be required to pass through an 8"x24"  passageway. This was illustrated by the concrete structure in the center of this picture. (Another reason why we did NOT choose this tour.)

The Basic and Scenic Tours begin at the Visitor's Center.  Visitors are transported via elevator to an initial depth of 306 feet beneath the surface. Yesterday's outside temperature was approximately 80 degrees at the surface.  The cave is a constant 49.3 degrees and a jacket is strongly suggested before heading down. 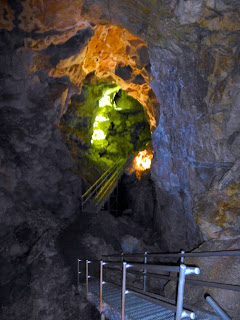 The Scenic Tour traverses many stairs (both descending and ascending), metal ramps, metal platforms, and concrete walkways to explore the cave.  This tour descends to a depth of 387 feet beneath the surface.  The wild caving tour goes down to 500 feet. Here's a look at some of the formations in the cave.  (Sorry about some the poor quality, but flash photography is prohibited in areas when the group is walking.) 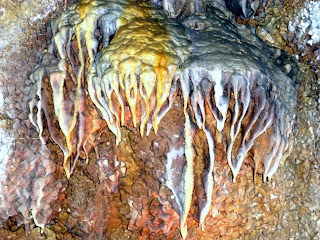 For those of you who have taken cave tours back East, you'll notice that the inside of the caves and their formations are quite different.  The cave here is chiefly made of calcite, so you don't see the stalactites and stalagmites found in the eastern caves. 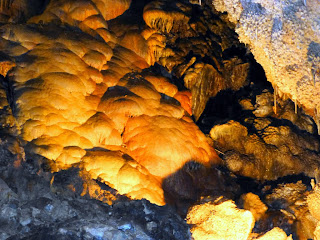 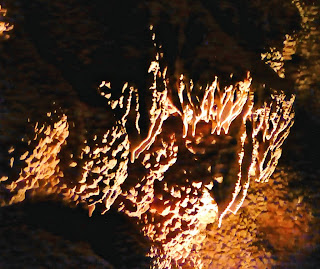 During the tour we learned that the discovery of the cave was made by two brothers Frank and Albert Michaud in 1900. They found a small opening too small for human entry, but used dynamite to enlarge the opening and found "jewels" glistening along the walls. The brothers thought they had found a very profitable area and filed a claim.  The glistening walls turned out to be calcite crystals which were of little commercial value.  Along with a partner, Charles Bush, the trio attempted to open the cave as a tourist attraction in 1902. This ultimately failed and the claim was sold to the Federal Government for $750 after President Theodore Roosevelt declared the area a national monument in 1908.  The brothers moved away from the area. The National Park Service began administering the monument in 1933.

The original cave opening discovered by the Michaud brothers can still be visited, but is locked unless a tour group is being led in through this opening. 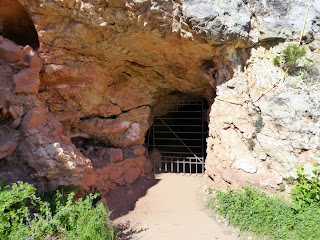 Along the walk to the original opening site is an area that has a few benches and what looks like an opening into the cave.  Karen took a look inside, but decided our tour was much easier than climbing into this hole. 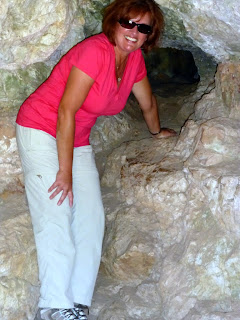 On our way back to the campground we decided to take another drive through the Wildlife Loop Road in Custer State Park.  Well, we finally got lucky and saw some of the buffalo "up close and personal".  Here's a short video showing the buffalo blocking the roadway.