Trying to play a bit of catch-up with my blogs. 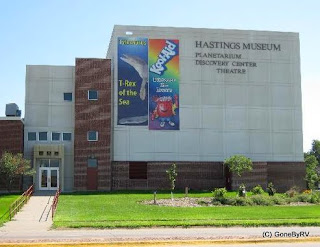 On Friday we visited the Hastings City Museum.  Normally, you would think of town and city museums as relatively small and containing only local items of interest. Let me say that if you are ever in the Hastings, NE area you should visit this museum.  It not only contains pieces of local history and interest, but also a planetarium and an IMAX theater which presents many varied films for different age groups as well as 3D films.

We learned that Hastings was formed in 1872 at the junction of two railroads. It was named after Thomas D. Hastings, a railroad construction engineer.  Hastings was a rough, tough boom town and grew to a population of 2800 by 1880.  As of 2011, there were 24,788 persons living in Hastings. 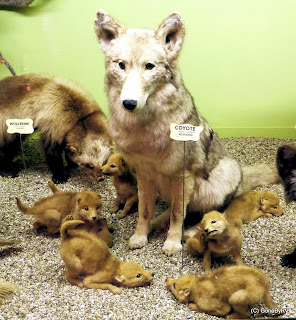 The museum contains many displays of animals found both in and out of Nebraska.  I like this exhibit showing a coyote and her pups. 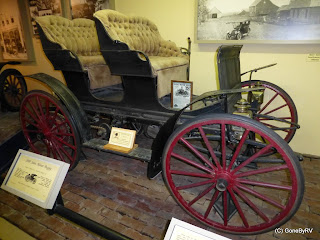 The museum also contains a nice collection of early forms of transportation including wagons, stagecoaches, bicycles, and automobiles from the early years of production.  I learned that Sears, Roebuck, and Co. produced 9 models of automobiles between 1905-1911. The vehicles were built for them by the Lincoln Motor Car Works in Chicago, IL.  The goal was to keep the car affordable and this one, named the 1909 Motor Buggy, sold for $395 while other makers were selling cars which cost 10 times that amount. The really interesting fact, however, that the cars were sold with a 10-day trial period.  If you didn't like it, you brought it back. 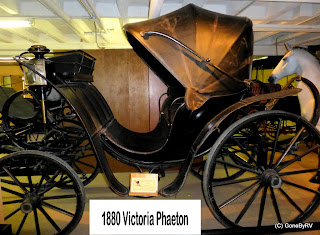 I couldn't resist taking a look at this early "Phaeton" as we have a Tiffin Phaeton motorhome. This one pre-dates the motorized vehicles to come as it dates to 1880.  (Not quite as comfortable looking as our Phaeton.) 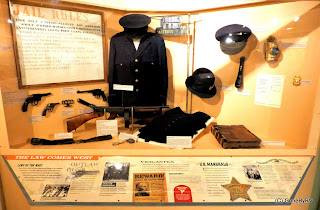 The museum also houses a very comprehensive collection of firearms dating from the earliest used by the first settlers to the country through present day.  An interesting exhibit to me was that of law enforcement from the early days of the West thru a period including the 1950's in Nebraska.  I will have to say that uniforms, equipment, and procedures have definitely changed for the better in this field during that time period. 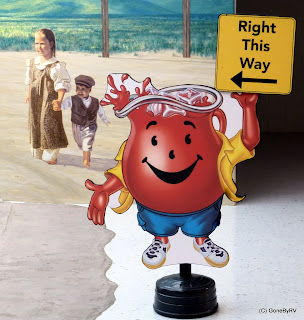 Okay, it's time for a subject which I definitely did not know about.  Question: Where, when, and by whom was Kool-Ade (now called Kool-Aid) created?  Because of the display (a rather large one, I might add) I learned that Hastings, NE is the birthplace of Kool-Aid.  Edwin Perkins came up with the idea and first made a liquid version of what later became known as Kool-Aid in his mother's kitchen.  The first liquid version was called Fruit Smack, but after finding that the glass bottles of that product were too hard to ship without breaking, Perkins found a way to remove the liquid from the product and leave only a powder in 1927. Rapid growth ensued and demand forced the movement of production to Chicago in 1931. Hastings now has a festival each year in August to Kool-Aid.  I understand the festival has grown rapidly in the past few years. 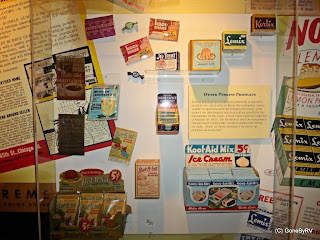 Kool-Aid branched out into many different products through the years.  Some prospered, some were eventually discontinued. 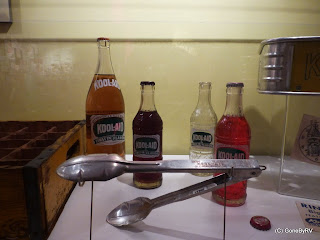 For a while, even a liquid "ready to drink" version was sold. 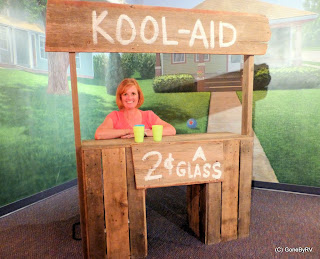 I wonder how many young kids have sold Kool-Aid at stands thru the years?  Here's Karen trying her hand.

As you read this blog, we've moved on to visit our new "home state" of South Dakota.  We made about a 5 1/2 hour drive up to Sioux Falls, SD on Sunday. We'll be touring the area for the next 8 days.  Hopefully, I can do a better job of keeping up with the blog in a more timely fashion.

Thanks for stopping by to take a look!
Posted by Steve and Karen at 11:09 PM