On Tuesday morning it was time to leave Papillion, NE.  Originally, our next destination was to be somewhere near Sioux Falls, SD to tour the sights in that area for a bit, but we had several days open in the schedule until we wanted to head up that way.  No problem. We're fulltimers and plans can change at the drop of a hat.  We've been Lifetime members of the Good Sam Club since the early 1990's, but up until now we had only been able to attend our local chapter's outings when we lived in Virginia, plus the state rally each year in the spring.

Well, now that we are fulltime RVers we really don't belong to any Good Sam chapter anymore.  I happened to be looking at the Good Sam site for possible state Samborees in areas which we might be traveling thru in the next few months and came upon the Nebraska State Rally in Hastings, NE running June 6-9th. Because Hastings is only a few hours west of Papillion and because the rally rates were reasonable we decided to register and head to Hastings as an "early bird" arriving on Tuesday afternoon.  The rally is being held at the Adams County Fairground on the south end of Hastings. 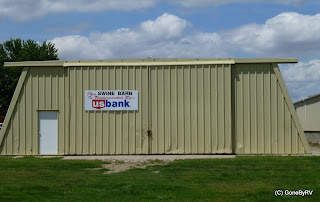 Fortunately, it's still early in the season and the weather is still fairly cool as we're parked right across from the Swine Barn. Thank goodness the barn is empty!

These are just a few of the rigs already on the grounds when we arrived.  We heard tonight that there are 218 rigs at the rally. 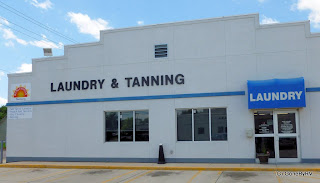 We have been without sewer hookups since we arrived at Papillion on May 30th, so we've been saving up our laundry until we got to a town with a few laundries. (We have a washer/dryer in our rig, but didn't want to fill up the grey tank by using the washer too much.)  I know that some of you will disagree, but we LOVE our washer/dryer in the rig.  We haven't used a commercial laundry in some time and had forgotten how expensive and inconvenient (in our opinion) they can be.  Fortunately, we found one only a short distance from the fairgrounds. We went there and found that we could not only do our laundry, but get a tan as well.  LOL 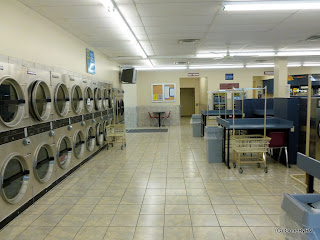 I will admit, however, that this laundry was very clean inside and we were in and out in short order.

Okay, back to the Samboree. Something that we have found which is consistent at ALL gatherings of RVers is that folks like to eat. People will be late for a lot of things, but not when it comes to mealtime.

The Samboree has been a lot of fun so far with the opportunity to meet new folks and to enjoy some pretty good evening entertainment.  On Thursday night a group out of Omaha, NE named "Bill Wakefield and Random" played a variety of songs from the '40s thru the early '60s. They were very good.

On Friday night the entertainment was provided by a husband-wife duo named "One More Time".  We had seen them a few years ago at another large RV rally and remembered them as being very good. In this picture they're dressed in Christmas garb because the theme at this rally is "Christmas in June".  Again, they did a very nice job and everyone seemed to enjoy their show.

We got a chance to get out and visit the city of Hastings on Friday, but I'll speak more about that in the next blog.

Thanks again for visiting our blog!
Posted by Steve and Karen at 12:58 AM