Thursday was another beautiful day in this part of western South Dakota so we decided to make a visit to Deadwood, SD. The entire city limits of Deadwood is listed as a National Historic Landmark District. 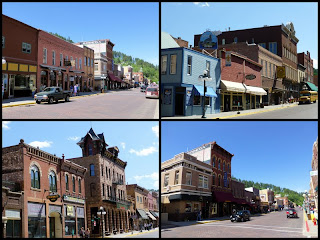 Deadwood began as an illegal settlement in the 1870s on the land of the Lakota Indians.  When General George Custer led an expedition to the Black Hills area and announced that gold had been discovered near what is now Custer, SD, the population boomed to 5000 people and the lawlessness ballooned.

The streets of Deadwood swelled with saloons and brothels.  After all, the gold miners needed somewhere to spend their newly found wealth.  Much notoriety came to Deadwood due to the murder of Wild Bill Hickok on August 2, 1876.  Murder was common and justice was not always "just". 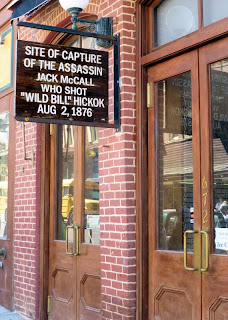 Jack McCall was captured in Deadwood and charged with the murder of Hickok. He was tried and found not guilty in his first trial.  He was later tried again and the prosecution claimed that the first trial lacked proper jurisdiction as Deadwood was an illegal town in the Dakota Indians' Land.  The second trial was held in an Indian court and McCall was found guilty this time around and subsequently hanged on March 1, 1877 at the age of 24.

Calamity Jane (born Martha Jane Canary) was a famous frontierswoman and "friend" of Wild Bill Hickok. Although she died 27 years and 1 day after Hickok she requested that she be buried next to him in Mt. Moriah Cemetary (located on the hill above Deadwood).  Calamity Jane's grave is right next to Hickok. 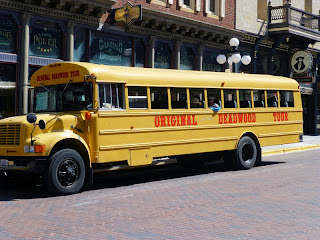 To get our bearings and learn the basic history of the town we boarded this ultra modern tour bus and traveled around the town and to Mt. Moriah Cemetary.  Actually, the tour guide was very good and the tour very enjoyable. 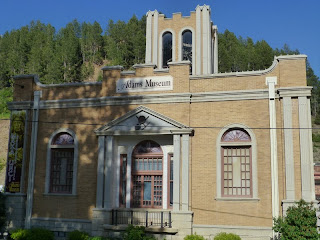 We walked around town on our own after the guided tour.  We would loved to have gone inside the Adams Museum, but (as we have in the past) got to the museum after it had closed.  Maybe another trip. 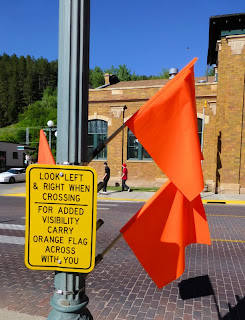 It was not very busy in Deadwood today, but apparently the traffic must get to be pretty heavy during the true touristy season.  We thought this was an interesting sign at one of the crosswalks we came upon.

One beautiful home in Deadwood is named the Adams House and was originally built in 1892 by Harris and Anna Franklin, early pioneers and entrepreneurs to the area. The house was purchased by W.E. and Alice Adams in 1920 for $8500.  Since 1992 the Deadwood Historic Preservation Society has owned the property.


We try and always take different routes to and from places we visit so as to see as much of the area as possible.  We returned to our campground via SR385 and SR40.  Some really beautiful scenery as we wound through the mountain passes. 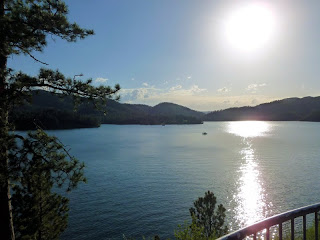 We stopped briefly at Pactola Lake just to take a few pictures from the overlook.


Again, thanks for dropping by to take a look!
Posted by Steve and Karen at 3:05 AM