The "High Point" in our Travels So Far

Yesterday's main activity was to hike up to Harney Peak.  Harney Peak is the highest peak east of the Rocky Mountains and west of the Pyrenees Mountains in Europe at a summit height of 7242 feet.  Modern day use of the peak was for a fire lookout station.  The first non-native Americans to explore the area occurred in 1874 during an expedition led by General George Custer.

We were able to spot a few Bighorn sheep and a couple of young ones meandering along the roadway as we set out through the Park today.  This is our first sightings of these animals. 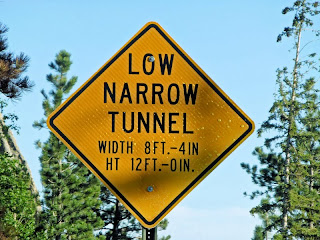 Before getting to the trailhead at Sylvan Lake, we traversed the Needles Highway within Custer State Park.  As are most of the areas in Custer State Park, Needles Highway was filled with beautiful views and unusual sights.  There are two tunnels in this stretch of the roadway.  The most interesting yesterday was the smallest tunnel which has a clearance width of just 8'4 and a height of 12'0. 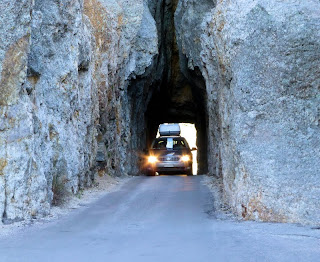 Amazingly enough, as we were taking pictures a short distance down from the tunnel, we noticed quite a traffic backup on the low side of the tunnel.  I looked and couldn't believe that a full-size sightseeing tour bus was slowly squeezing its' way through the tunnel.  I really wish that I was closer to be able to get a picture of that.  The bus eventually made it and traffic resumed.  Here's how it looks as a smaller vehicle makes its' way through the tunnel.

Here's a few pictures near this particular tunnel.

Did I mention that there is always something to see along the roads.  The signs are definitely posted for a reason in this area.

A few more looks at formations along the Needles Highway. 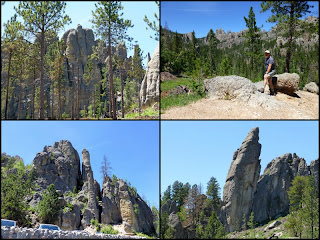 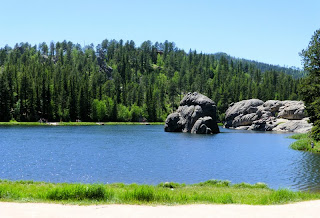 We finally made it to Sylvan Lake where the trailhead for our hike to Harney Peak begins.  This area is a "day use" area and it was filled today with families picnicking, fishing and boating on the lake, and hiking the trails.  The weather was absolutely beautiful and the skies very clear today.

Harney Peak can be accessed via several trails, but this one was rated as "Moderate" so we decided that this would be best for our very limited hiking experience.  The trail is 3.3 miles each way and begins at about 6100 feet.  The ascent is 1142 feet. 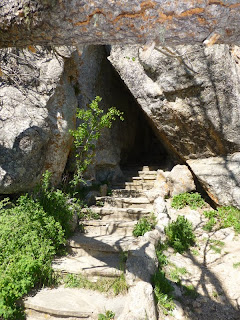 We found the trail to be very heavily used by all ages during this time of the year.  Actually, the trail itself is not difficult to navigate at all until you reach the last few hundred yards to the summit.  Then a series of CCC constructed stairs create a rapid change in vertical climb. 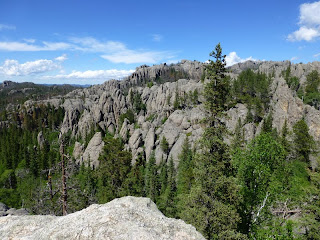 Some of the stops along the trail on the way up created "photo ops" at nearly every turn. 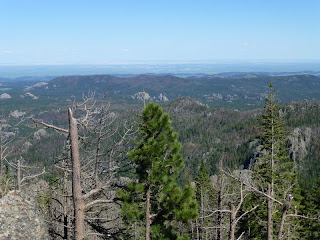 We finally made it to the top!  Here's a "touristy" shot of us taken by other climbers in front of the base of the fire tower.

The fire tower, pump house, and dam up top are all listed on the National Registry of Historic Places. This is a view from the pump house room located down from the lookout tower. It's not a climb for those with balance problems.  Notice the close-set steps with steep vertical rise and the lack of any railings or handholds.
The man made dam was created atop the summit to provide water (via the pump house) to users of the lookout tower. 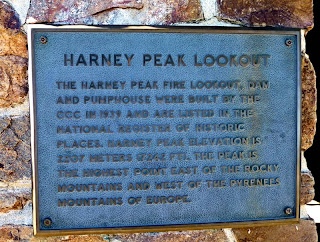 As I commented on at the beginning of this blog, the summit is the highest peak east of the Rocky Mountains and west of the Pyrenees Mountains in Europe.  For some reason, I found that pretty impressive. 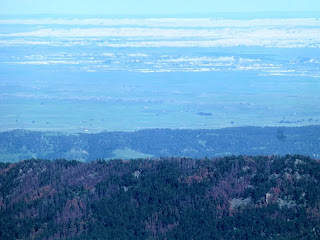 Needless to say, the views from up here are spectacular. There are no plaques or other indicators to tell you what you are looking at below, but we could clearly see the Badlands (about 80 miles east as the crow flies). The lighter areas towards the top of this picture are the Badlands, not clouds.


A couple of collages of the views from the top. 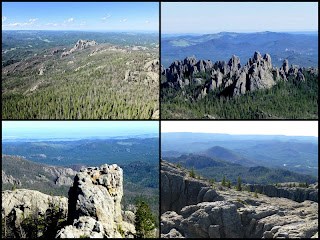 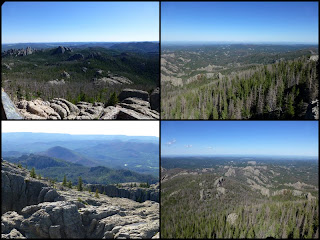 Here's where we had lunch.  Now that's a "room with a view". 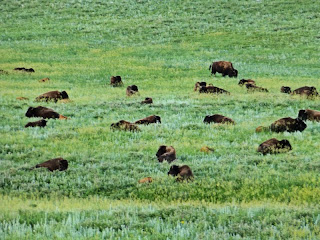 As it usually is, the trek back downhill to the trail head is tougher on the knees than the ascent.  Most folks were gone from the day use area by the time we returned to the bottom.  We took the Wildlife Loop Road back out of the Park, but only saw a herd of buffalo a good distance back from the roadway, and of course we saw the "friendly burros" again. 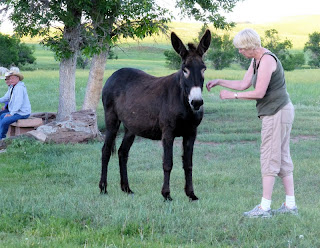 Thanks for dropping by to take a look!
Posted by Steve and Karen at 3:22 PM