Onward and Northward to Papillion, Nebraska

Thursday was our last day at the Prairie Band Casino campground.  We had escaped the rains throughout most of our days here but, of course, on the day we are set to leave it begins raining early in the morning.  We wanted to leave around 9:00 am, but by 10:00 am it was still raining.  Finally, I'd had enough and put on the raincoat and flip flops and trudged outside to hook up the toad and make ready the rig for leaving.  We left about 10:30 am (after I totally changed every bit of clothing I had on). 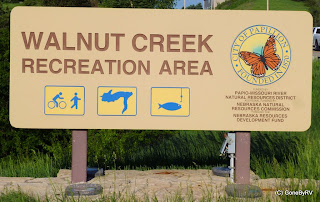 Our next intended stop is the Walnut Creek Recreation Area just on the south side of Papillion, Nebraska.  The drive was about 2 1/2 hours and uneventful after we got out of the rain. 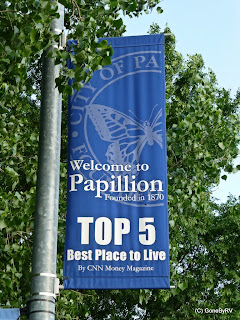 So where in the heck is Papillion, NE you might ask?  It's somewhat of a suburban area of Omaha, NE.  We saw these pennants placed around the lake, so I decided to look up the CNN Money Magazine source cited at the bottom of the pennant. Sure enough, Papillion, NE was voted #5 on the list in 2011. We have never been in any part of Nebraska before, but I found this campground when I was searching for some minor league baseball teams to watch along our travel routes.  I love minor league baseball because it's usually exciting to watch and inexpensively priced.  You can get a good, up close ticket to watch future major league players early in their careers. We will be attending several games for the Omaha Storm Chasers. They are a AAA team (next step up is the Major Leagues) and are a farm team of the Kansas City Royals.

Our campground is small, but very nice.  There are 45 sites here which all have concrete pads and paved roads throughout.  There are either 30 or 50 amp electric at every site, but no sewer or water.  There is a dump station within the cg and three potable water faucets scattered throughout the park for filling up the tank. 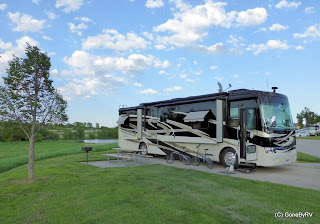 We decided to come in on Thursday after speaking to the camphosts who advised that the cg is very popular on the weekends. (No reservations are accepted.)  We're glad we came in early because by Friday evening almost all of the sites were taken. 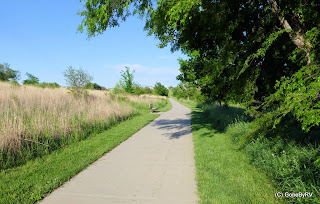 The campground is situated beside a man-made lake used for various forms of recreation.  There is a wide concrete path which circles the entire lake for a distance of 3.2 miles.  The path is great for biking, walking, jogging, or walking dogs. 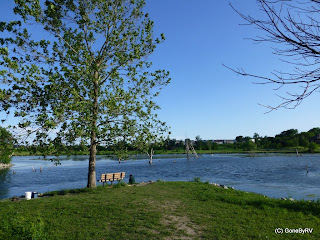 Although swimming is not allowed, many folks fish in the lake by boat and from the shore.

Here's a panoramic view of the campground showing our rig from the hill above...... 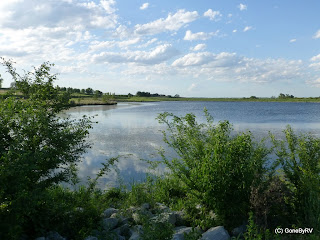 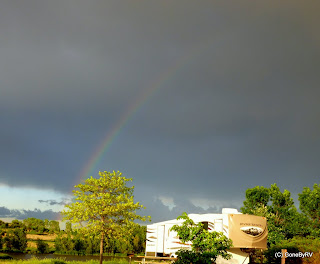 Unfortunately, we saw more of this on Friday evening, but it passed through quickly without too much rain and wind.