Returning to our "New" Home State

From what we've seen of South Dakota in the short 2 days since we arrived, we are impressed.  There is a 19.2 mile paved recreational path which completely circles the city.  Along that route are MANY city parks. We took no camera yesterday, so we'll have to save that subject for another post.

Today we visited the city's official Visitor Center located in the city's namesake of Sioux Falls Park.
The major natural attraction here is Sioux Falls which are located on the Big Sioux River.

Each year the city holds a contest for artists who create a bronze sculpture. The art works are displayed throughout the main street area and one is selected by popular vote. The city then purchases the work and puts it on permanent display.  This is an example of a winner from 2006 entitled "For Which It Stands" by James Haire. (Unfortunately, out of the picture, is the American Flag in the direction which the little girl is looking.) 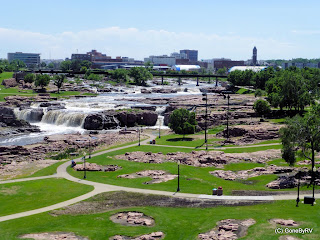 Here's an overview of the Falls looking from the top of the observation tower.

One of the earliest commercial uses at the Falls was the Queen Bee Mill. Construction of the mill began in August, 1879 and was completed two years later at a cost of nearly a half million dollars. The mill was one of the largest in the Midwest standing 104 tall, 80 feet wide, and 100 feet long. It could produce 1200 barrels of flour per day. The mill derived its' power by diverting the flow of the water thru a large 800 hp turbine. By 1883, the mill's owners were bankrupt. It failed because of insufficient water power, the scarcity of high grade wheat and the inability to pay dividends to its investors. The mill changed ownership several times, but shut down for good at the end of WWI when it was converted to a storage facility. In 1956, a fire destroyed the majority of the structure.  Only some of the exterior walls remain intact today. 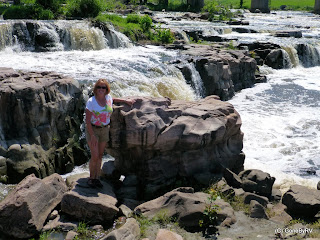 With the absence of fences, it's possible to get "up close and personal" with the Falls. 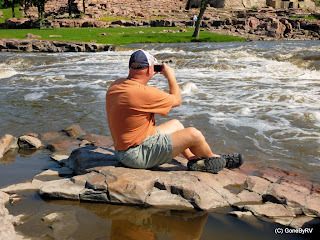 Here I am attempting to get a closer look at the Falls at they tumble down the stony canyons. 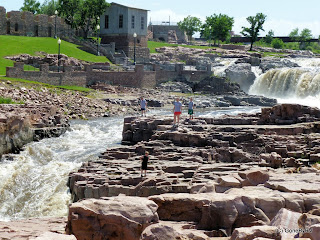 A few other views of the Falls. 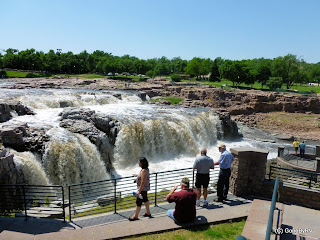 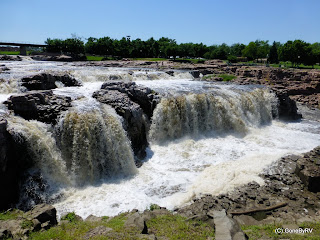 Trying to describe and photograph the Falls via flat, one-dimensional pictures is somewhat limiting. The     following short video will hopefully give you a better feeling for the area.


Thanks for dropping by to take a look!