Doing a bit of "back blogging" here to try and catch up with our activities of the past few days. When we began the FTing lifestyle we knew that we wanted to ride our bicycles in various locations we visited. We really enjoy our "road" bikes (the kind with the skinny tires) for paved trails and roads, but they aren't worth a darn for any other types of surfaces, so we bought "folding" bikes to allow us to ride around any campgrounds we might encounter. Plus, the bikes can be folded and stored away in a pretty small location.

Now, we drag around our folding bikes as well as the two road bicycles.  We still may change this thinking someday as 4 bikes are too much. We travel with the road bikes inside the Fit, but hang the folding bikes on a rack attached to the rear of the Fit. Probably a better "all around" bike would be some type of hybrid bike with the characteristics of the road bikes, but wider tires like a mountain bike, but not as knobby.  Oh well, none of this really has much to do with the Sioux Falls Bike Trail.

The Sioux Falls Bike Trail is a totally smooth, paved (or concreted) trail which encircles the entire city of Sioux Falls. It is a bit more than 19 miles in length and is very well maintained by the Parks and Rec Department.  Since we are camping at Tower Campground on Route 12, Legacy Park is the nearest point for us to access the trail. We've ridden the trail a few times now, and with the spur it totals 27.2 miles.

Sioux Falls has no shortage of parks and recreational facilities. They are spread along the trail every few miles, so you are never wanting for a water fountain or rest room. We especially enjoyed stopping to watch the dogs play in one of several "dog parks" along the trail.  They were some of the largest we've seen yet in our travels. 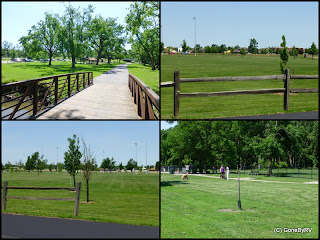 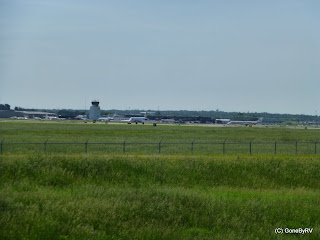 The trail takes you past a variety of landscapes.  On the north side of the city is the Sioux Falls Regional Airport.  We took a break there to watch a few planes take off and land one morning. 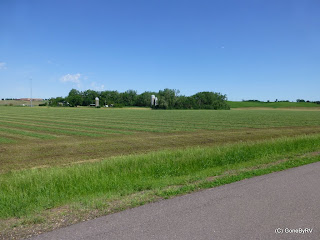 On the western side you'll pass open farm lands. 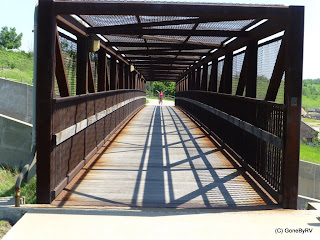 This was a bridge over a sluice waterway carrying water from the city down into the Sioux River below.  The South Dakota State Penitentiary is just above this area and visible from the trail as well. 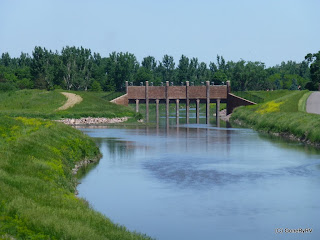 These water control gates are scattered along the river at various points to allow the water levels in the feeding canals to be regulated in case of flooding conditions. 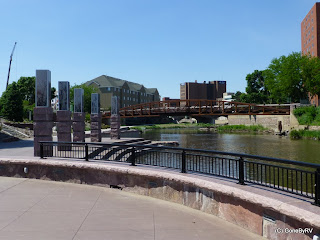 Back in the heart of the city the trail winds its' way thru new construction and along historical buildings. Again, when using our road bikes we like smooth.  There certainly is no shortage of nice paved trails in the Sioux Falls area to enjoy. 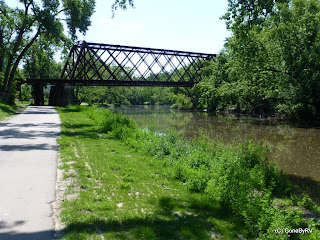 If ever in the Sioux Falls, SD area check out the bike trail.  Great fun and a chance to get a bit of exercise as a bonus.


Thanks for dropping by to take a look!
Posted by Steve and Karen at 12:20 PM