Our First Visit to the Pacific Ocean

Yesterday we decided to take a day trip in the toad over to the Oregon coast.  From Sutherlin we took 138 to Elkton, then 38 (the Umpqua Highway) over to Reedsport.  Both roads are very scenic and wind through the mountains and trees before getting to Reedsport. 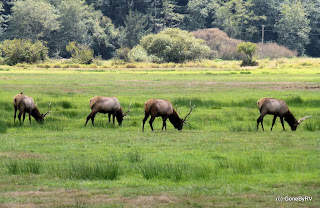 An unexpected treat was seeing a small herd of Elk at the Dean Creek Elk Viewing Area just 4 or 5 miles east of Reedsport.  There is sufficient parking for cars and RVs at the lookouts. 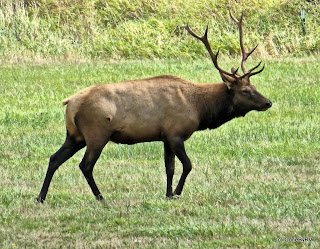 This guy was heading back to the rest of the group, although all of them seemed pretty used to having people snapping cameras and waving at them.


﻿﻿
Once we got to Hwy. 101 (Oregon Coastal Hwy.) at Reedsport we headed south.  It didn't take long to come upon a scenic view pullout.  Neither Karen nor I had ever seen the Pacific Ocean.  (It was always just too long of a drive for folks still working from the east coast.) 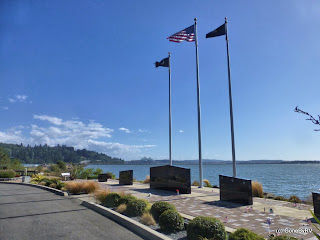 Our destination today was the coast near Coos Bay.  It was already starting to get late in the afternoon, because we got a late start.  Just north of North Bend we came upon a very nice memorial to our veterans.  The David Dewett Veterans Memorial is situated on the right side before just before crossing the bridge to North Bend. 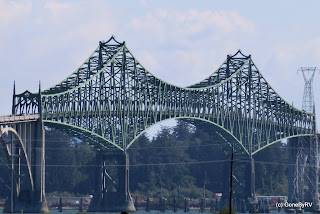 This is the McCullough Bridge (aka Coos Bay Bridge) which carries traffic into North Bend.  The bridge was constructed in 1936 and was the longest structure on Oregon's highway system when constructed. 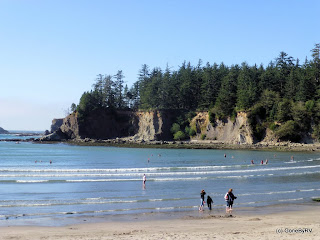 We turned off of Rt. 101 to get closer to the shoreline.  Oregon seems to have more state parks than any state I've seen, especially along the coastline.  We stopped at Sunset Beach State Park and got our first close-up look at the Pacific Ocean.  Although the water was a bit chilly the kids looked to be having a good time.

Although we took a LOT of pictures of our first time to see the Pacific, here's just a few pictures in a collage. 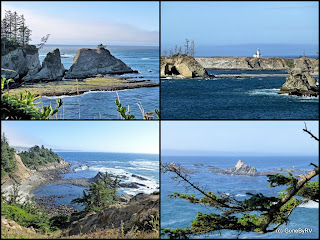 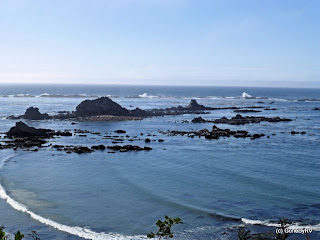 We continued down the road to Cape Arago State Park.  I sure wish that we had the binoculars for this stop.  The overlook here was Simpson's Reef and obviously a very popular spot for seals, seal lions, and harbor seals.  I'm not sure which ones were here at this time of the year, but I will vouch for the fact that they are LOUD from a distance. 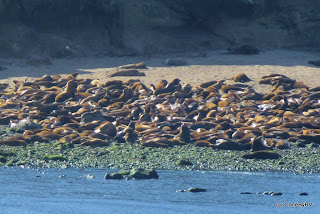 Here's a bit of a closer look with the camera's zoom.  They were really packed in tight. We were there at low tide. 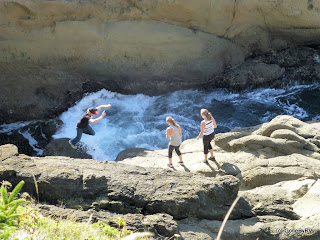 At the very end of Cape Arago State Park there are several overlooks at the very end of the point. What a beautiful area.  These young folks are a bit braver (and more nimble) than I these days. 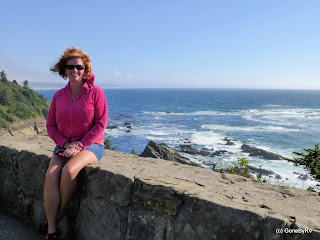 Although we weren't able to spend a lot of time exploring today, I think that Karen and I are both in agreement that we'll explore many of these coastal areas when we head towards the coast next week.