Further west to the Escapees Co-Op at Sutherlin, OR

We left Thousand Trails near Bend, OR on Tuesday and headed west about 175 miles to come to the Escapees Co-Op at Sutherlin, OR called Timber Valley.  For those who are Escapees, but not familiar with the differences between the regular Escapee campgrounds (called Rainbow Parks) and Co-Ops, here's a quick overview.

Rainbow Parks are owned by the Escapees RV Club and offer transient campsites to anyone who wishes to stay at their parks. Within the Rainbow Parks, deeded lots and leased lots are also available. The major distinction between the Co-Ops and the Rainbow Parks are that Co-Ops are owned and run by the members of the Co-Ops and offer a lifetime membership in that particular campground.  Members "buy into" the co-op lots, but do not own the land.  They pay an annual fee (similar to maintenance and operations fees elsewhere).  These fees usually include everything with the exception of electricity use.  The interesting thing about the Co-Op setup is that should you decide to leave that particular co-op, then you receive your original "buy in" money back, along with any special assessments made during your membership in the co-op.  There is no selling of the lots, as the lots are simply put back into a pool (of which there is a waiting lists at ALL of the co-ops).

This was the first Escapee Co-Op we have ever visited.  I will have to say that we are impressed. The grounds are maintained very well and EVERYONE we've met has been very friendly.  This might be because of the requirement that anyone desiring to stay (either long or short term) must belong to the Escapees.  We have found the Escapees members to be some of the friendliest folks of any of the RVing organizations we've had contact with. 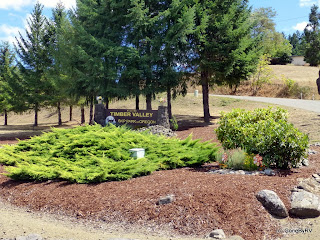 Timber Valley is just a short distance from Interstate 5 thru Sutherlin, but is located in an area unto itself beside the mountains.  Nothing like the mountains near Bend, as we've crossed the Cascades and we're in what's locally called the "banana belt" to the milder weather.  (That means generally warmer than the Bend area, but milder overall.)

All of the sites are currently leased, but when the lessee is away, the lots are put into a rental pool for transients like us.  The sites here are 50 x 70 and some are developed with landscaping, but some are undeveloped like the site we occupy.  All sites have a shed, but is not available for use by renters. 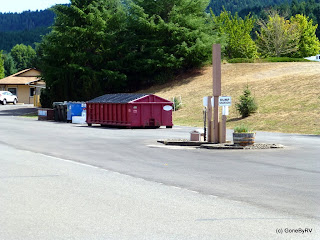 The park is very well laid out and easy to maneuver with any size rig.  This is the recycling area and dump station located in the logical place of outside the main registration area and away from the rigs. 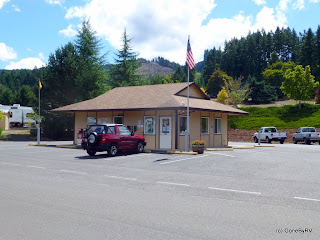 The registration area is just past the dump station and recycling area and is very wide.  The registration office also includes the mail room where lot holders pick up their mail. 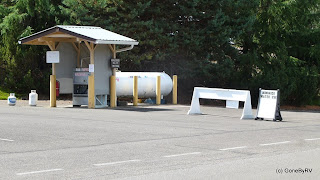 A wide area to obtain propane is located near the office and has one of the cheapest rates we've seen yet at $1.65 per gallon. 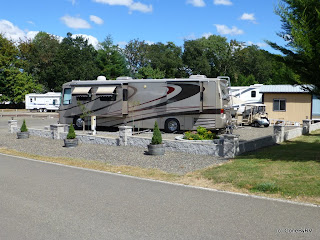 As mentioned previously, some lots have been improved, some have remained as they were. 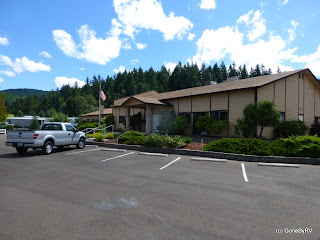 There is a nice lounge and activity center where club events are held.  This Co-Op was celebrated its' 25th anniversary this past week.  There are spaces inside for meetings, billiards, card and board games, and for just relaxing and watching TV if desired. 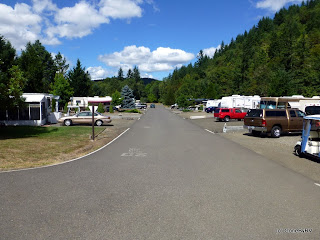 The streets are wide and paved throughout the Co-Op. 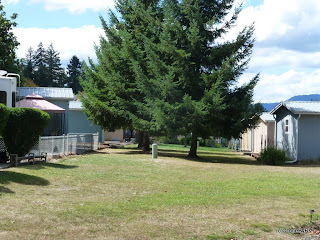 The rows of lots are spaced well and usually have some grass and trees separating them from the next row. 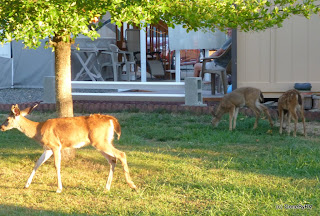 Although no one claims to be feeding them (it's actually against the law here), there are several deer and their young ones, wild turkeys, and a black-tailed jack rabbit observed wandering slowly thru the park. They do not seem afraid of humans at all. 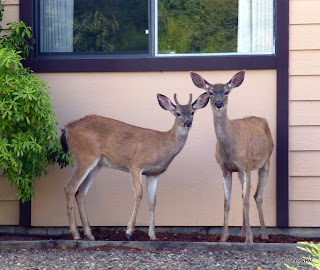 Here were a pair right outside the activity center the other evening. 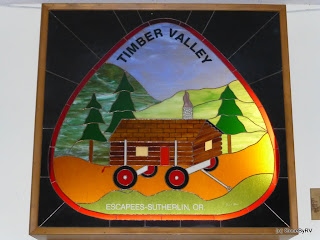 As always, thanks for stopping by to take a look!
Posted by Steve and Karen at 8:37 PM