Yesterday (Tuesday) we set out to explore the Yaquina Head Lighthouse just a few miles north of Newport, OR. Of course, with all of the beautiful opportunities to pull off the road and take pictures and walk on the beaches we got strayed from our original goal until later in the afternoon. 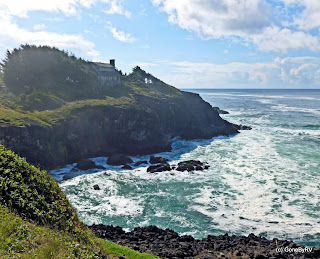 It worked out well, however, as we located a 3-mile drive along the ocean named Otter Crest Loop. There are several places to pull off the roadway on this one-way (south to north) windy, quiet road. The owner of this house certainly has a room, probably several, with a view! 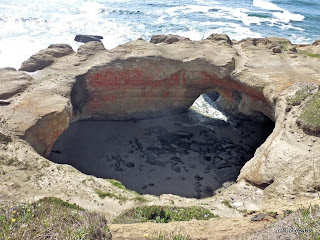 Otter Rock State Park lies just north of Cape Foulweather which we visited in our previous blog. A feature in the park is named the Devil’s Punch Bowl. The water enters the single hole in the basalt structure and swirls around inside with every new wave surge.  Unfortunately, we took this picture at almost low tide and the turbulence is not very spectacular.

We took a walk down on the beach from one of the pull offs. There is definitely a lot of beach to walk and explore, many times with very few people other than yourself. 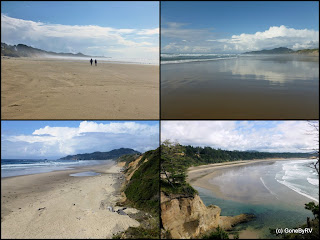 We almost made it to the end of the Otter Crest Loop when we found a few more pull outs. Again, we just had to stop and take a few MORE pictures of the beautiful Oregon coastline. 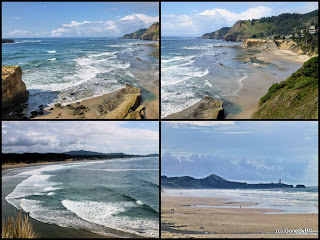 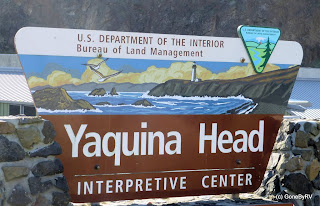 Finally, around 5:00 PM we arrived at the Yaquina Head Lighthouse area.  This area is administered by the Bureau of Land Management (BLM) today. 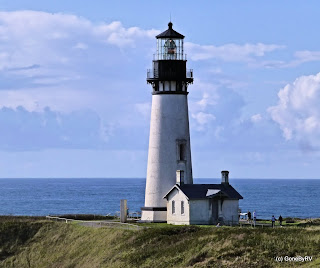 The light from Yaquina Head was first lit on August 20, 1873. Various keepers kept the light burning until 1966 when the light was automated. It remains as an active aid to navigation today. Two items of note are that the original lens is still in place today, and at a height of 93 feet, Yaquina Head lighthouse is Oregon’s tallest lighthouse on the entire coast. Tours of the lighthouse are given throughout most days of the week by the rangers on duty, but a ticket (free after the admittance fee of $7 to the area) must first be obtained from the Interpretive Center. (NOTE: This is a Federal Fee Area and the various lifetime and annual passes are accepted for entrance.)

As expected, views from the top of the lighthouse are spectacular. Sorry, I just had to include a few more beach shots. 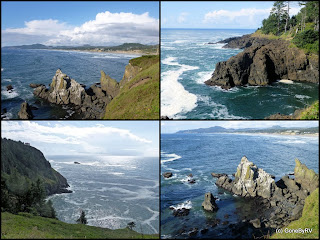 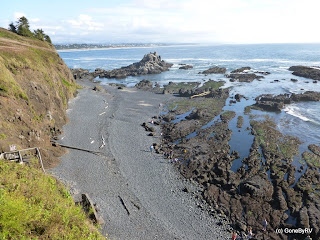 We actually were somewhat lucky we arrived late in the afternoon. Low tide today was at approximately 5:30 PM and this gave us the opportunity to visit one of the two tidal areas within the area.  Quarry Cove and Cobble Beach are excellent areas to look at marine life left clinging to rocks and crevices once the tide has gone out. 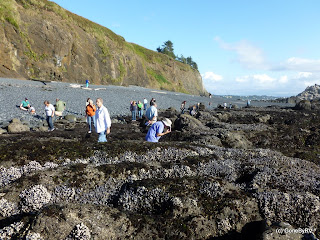 Cobble Beach facilitates folks actually going down on the low tidal area and examining marine creatures up close and personal. 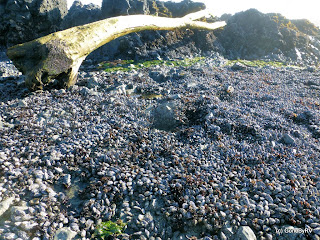 The only prohibition from the rangers is that you don’t step directly onto the California mussels which are a food source for many other creatures. Sometimes that a bit tricky as this picture shows. 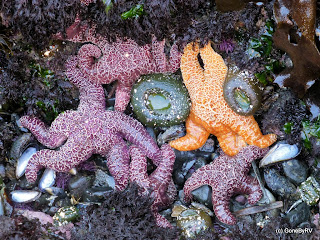 These guys were really clinging to the rocks.

There was an abundance of these creatures throughout the tidal pools. 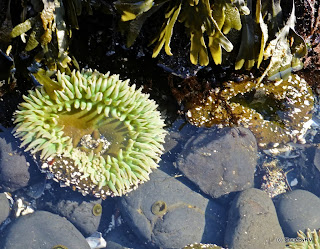 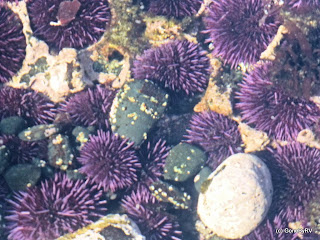 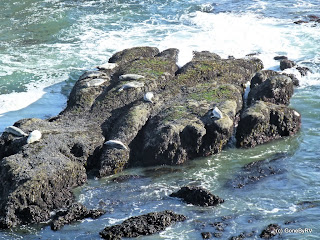 We also saw some “not so small” creatures enjoying the area of the tidal pools.  These harbor seals were sunning themselves on the warm rocks and didn’t seem to even notice the people who were wandering all over and around their beach. 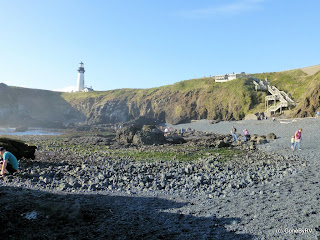 Here’s a picture which shows the proximity of Cobble Beach to the lighthouse. It’s named Cobble Beach because of the multitude of black cobblestones which blanket this area.  The stones are very smooth to the touch.


It was just starting to get dark when we finished exploring today. A very nice end to another great day here on the Oregon coast. 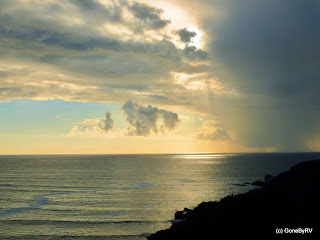 Thanks for stopping by to take a look!
Posted by Steve and Karen at 10:23 PM