Starting the Move South for the Winter

We left the Thousand Trails Preserve at South Beach, OR on Wednesday to begin our "slow" movement toward Arizona for the winter season. Neither Karen nor I had ever seen redwoods, so we decided to head toward the redwoods in northern California.

We arrived in Klamath, CA (about 20 miles south of Crescent City) on Wednesday afternoon after driving thru rain the entire drive. I'm really not a fan of driving in the rain, but after the last few days of continuous rain in South Beach, OR, a change was definitely needed. 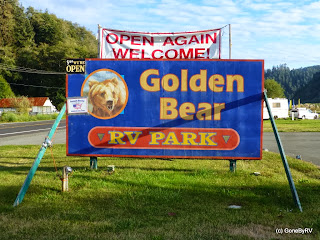 After reading thru a few reviews of area campgrounds on RvParkReviews.com and checking the Passport America listings we selected the Golden Bear RV park. Most of the parks in the area are described as "fish camps" because of the proximity to the Klamath River and the salmon fishing in the river.  Many times, fish camps might be considered a bit on the rough side, but Golden Bear RV Park is actually pretty nice, and the price was right at $15 per night for full hook-ups. 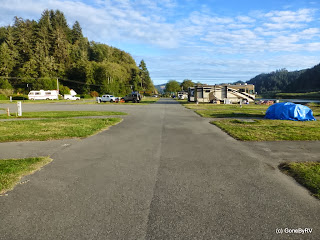 Surprisingly, the CG is not really busy right now. The CG isn't fancy, but has paved interior roads and paved RV sites. Here's a look at our site. Notice the "pull in" sites for a nice view of the river. 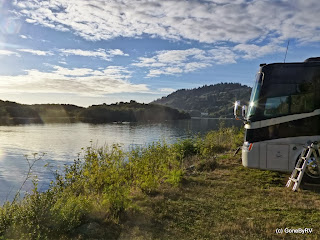 The view out the front windshield is pretty nice. The river is literally right down the bank, but the CG also has a boat dock for those with boats. The mouth of the river into the Pacific Ocean is only about 1/2 mile down river. 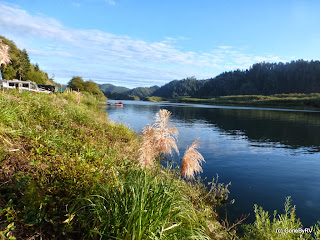 A popular area attraction is the Klamath Jet Boat Tours up the Klamath River. Their business is located beside the campground, but this time of year most of the tourists have gone and it's not nearly as busy as summertime. 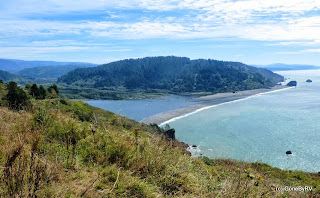 Today we ventured out a bit to explore the area. Just a bit north of us is an overlook on the north side of the Klamath River located high on a bluff overlooking the junction of the river with the Pacific Ocean. In the picture, the Klamath is separated from the ocean only by a thin sand bar, but empties into the ocean toward the top. 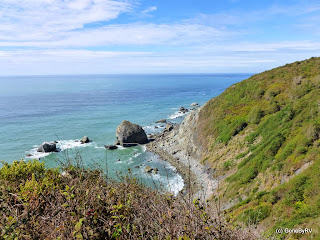 Here's a view looking north along the coast from the observation deck at the top. 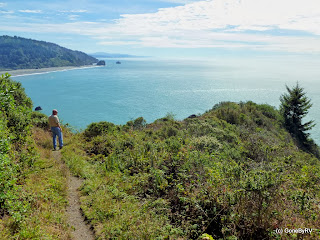 Of course we had to hike down the trail to a lower level to take a closer look. 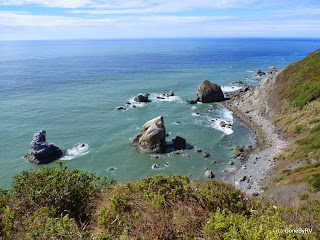 More beautiful views from a lower position on the cliffs.  We're again looking north in this picture. 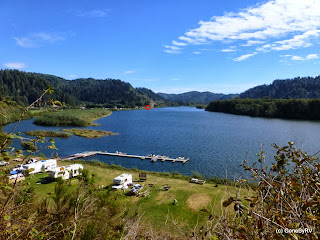 After leaving this area, we stopped briefly for a view of our rig's position along the river. Our MH is circled in red. Our next stop was on the south side of the river. The south observation point allows you to see how the Klamath River arrives at the entrance to the Pacific Ocean. 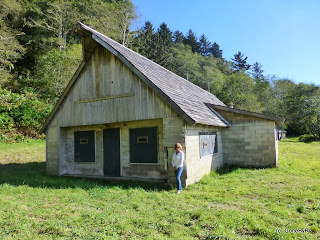 A trip further up the hill took us to an interesting spot.  The site is known as Radar Station B71. It was constructed by the US Army for use during WWII to monitor the movement of Japanese subs in the northwest waters. The interesting part was that it was built to look like a working farm. Although constructed of concrete blocks, it was clad in wood planking and had split wooden roof shingles with false dormers. 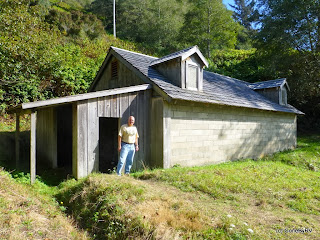 From the air, sea, and even from the road the structure appeared to be a farm, but inside contained electronics, a diesel generator, and 2 50 caliber machine guns. 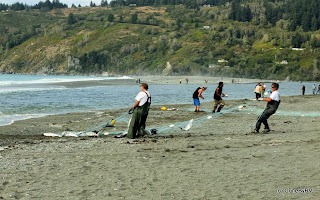 We returned to the beach area on the south side of the river to watch the fisherman catching Chinook Salmon using both nets and lines.  This area is dominated by the Yurok Indian Tribe who have lived near and fished these waters for centuries. 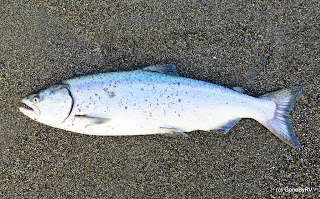 The salmon were so plentiful that they would occasionally beach themselves. 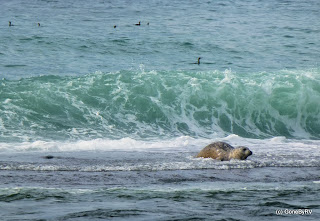 Not only were the humans fishing today, but the seals, gulls, and pelicans were also having a field day. 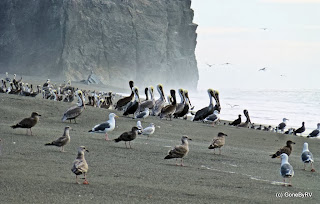 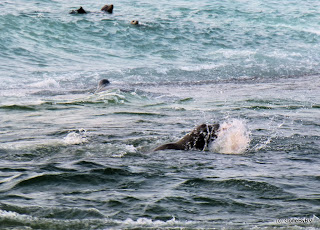 The seals were literally 50 feet off the beach waiting for the fish.

Here's one fellow who appears to be surfing the swells.

We ended a great day by watching the fisherman, seals, birds, and the surf rolling in until the sun began to set.  Tomorrow we hope to explore the area and visit some of the nearby parks containing the redwood trees.