A Closer Look at the Redwoods

Yesterday was our chance to get out and actually see some redwoods up close before the rains began again.  A bit of redwood information first.  There are today three types of redwoods remaining in the world. The first, the Dawn Redwood, was thought to have been extinct, but was re-discovered a few years ago in Central China. The second, the Giant Sequoia, grows on the western slopes of the Sierra Nevada mountains in central CA. The type of redwood in our present location is the Coastal Redwood. It is found along the northern CA and southernmost OR coasts.  Although not as large around (generally) as the Giant Sequoia, the Coastal Redwoods are the tallest redwoods in the world. Only about 5% of the old growth Coastal Redwoods remain in existence today after years of logging activities. 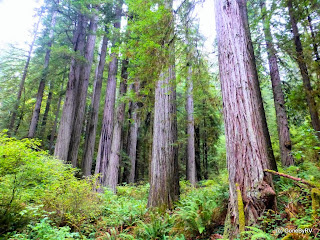 In this area of CA there are several individual parks which comprise the Redwood National and State Park system.  Management is a joint effort by the state of CA and the NPS. The closest park to our current location is Prarie Creek Redwoods State Park. Just a short drive south out of Klamath and we entered the Newton B. Drury Scenic Parkway. The parkway is only about 10 miles long, but it is a leisurely drive through a lot of old-growth redwoods. 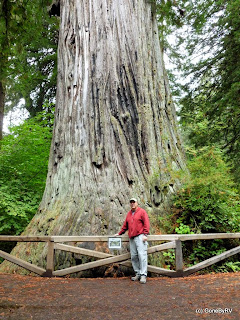 We made a stop along this parkway to get a chance to see our first "up close and personal" look at the redwoods. We were fortunate, as this area featured "The Big Tree".  This old Coastal Redwood has the following dimensions:  304' tall, 21.6' diameter, 68' circumference, and is estimated to be 1500 years old. Think of the stories that tree could tell! 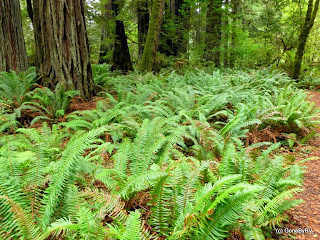 We took a short trail walk near this area.  One of the plants prevalent wherever we walked was the fern.  Karen really likes ferns, so a shot of ferns is in order here. 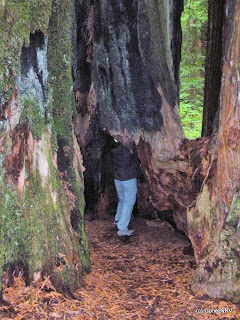 Coastal Redwoods have very thick outer barks.  Old-growth trees can sometimes have bark up to 2' in thickness. The thick outer casing protects them in times of fire. At times, however, the fire reaches the inner core of the tree and eventually causes it to die. 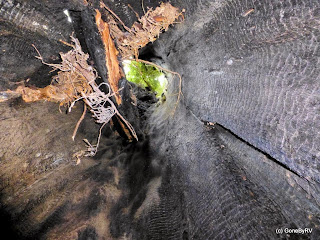 When the fire consumes the core of the tree, the upper portion falls first after many years.  At this point this feature is called a "chimney tree".  Looking up inside the tree resembles a charred inner lining of a chimney. 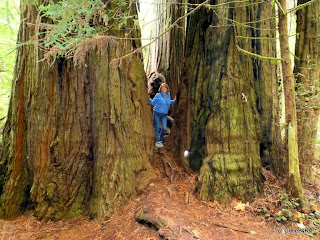 We found that several individual trees will often share an intertwined root system at the base of the stand. 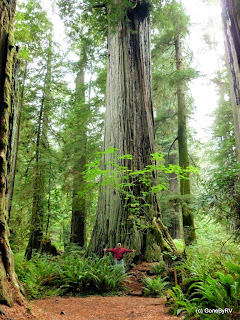 Did we mention that these trees are really, really big! 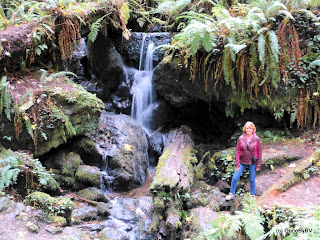 After a short visit at the Prairie Creek Visitor Center we drove a bit south to Davison Road and parked at Elk Meadow to look for Roosevelt Elk in the meadows.  We didn't see any, but we did discover another hiking trail to Trillium Falls. This entire area used to be heavily logged up until 1970. The Federal Government purchased the land in 1990 and an effort toward re-forestation began.  The very comfortable 2.5 mile trail first allowed us to see Trillium Falls. 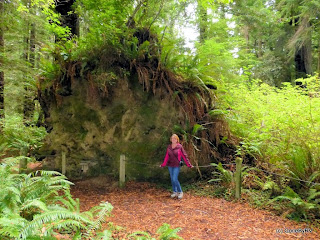 Not great as far as waterfalls go, but the real purpose of this trail is to show the old growth trees.  We learned that although the upper portions of redwoods are massive, the root systems are actually quite shallow. They have no tap root and the depth of the roots are often times only 10 feet or less. 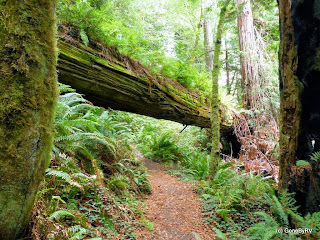 Walking through a forest of redwoods takes on an almost magical feeling.  The sheer size of the trees combined with the lush ground vegetation and filtered sunlight all make for a very "quiet and peaceful" feeling. 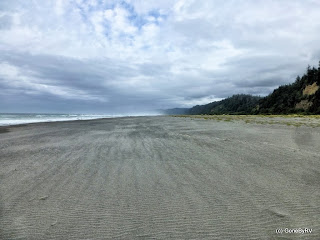 We left the Elk Meadow area and continued east on Davison Road toward the shore.  Our goal was to see Fern Canyon beyond Gold Bluffs Beach, but a water crossing in the Honda Fit was not in the cards for today.  We stopped briefly at the beach, but as it was pretty windy and down right chilly, we didn't spend much time there.  It looks as though not many folks wanted to be out on the beach today either.

The redwoods are a magnificent sight to see. For those who have never experienced this, a bucket entry notation should be made.

NOTE: As I write this blog on Sunday morning, the rain has returned as of last night and is supposed to continue thru today and most of Monday.    We were supposed to leave this area on Monday, but might push the move back to Tuesday as I just don't want to tear down in the rain again.

Thanks again for stopping by to take a look!
Posted by Steve and Karen at 1:44 PM

Email ThisBlogThis!Share to TwitterShare to FacebookShare to Pinterest
Labels: Redwoods