I know it’s been a bit since our last blog, but the reason for that is pretty simple. There just wasn’t a whole lot to blog about.  Just got a lot of little projects completed and did a bunch of “domestic” stuff while positioned at the very nice SKP Sutherlin, OR Co-Op.

Well, our time was up and although we enjoyed the park and the folks we met, it was time to move on. We moved a whopping distance of 128 miles from Sutherlin, OR to South Beach, OR (just south of Newport) on Wednesday. All I can say about driving up the Oregon coast is Wow! Very pretty.  We’ll be taking the toad to do some exploring later in our stay here.

I did get a bit apprehensive (ok, I really mean nervous) when we came to a tunnel and the edges are marked as 11’6'” because our rig is 12’7”.  Fortunately, a very nice 18-wheeler driver stopped at the other end of the tunnel which allowed  neither of us to have to change our shorts after squeezing through at the same time. 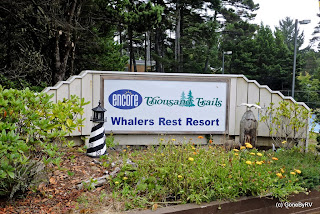 We are staying for the next few weeks at the Thousand Trails Whaler’s Rest campground just 5 miles south of Newport.  We arrived just after noon and I can’t believe how busy this place is. We unhooked the toad and made a scouting expedition thru the park before deciding on a spot.  This was the first time we’d ever been here and the park is a bit different than some.  It’s somewhat separated into a north and south section divided by a road with entry gates to each section.  I had heard that it was better to get a spot in the north section for cell phone and internet use, but there really was nothing available over there that could easily accommodate our rig, so we went back and selected a spot in the southern section.  Our blog posts may be fewer and farther between as we have almost no Verizon signal at the rig.  Fortunately, Whaler’s Rest does have cable TV hook-ups because most sites are heavily treed (ours included) and satellite is out of the question. 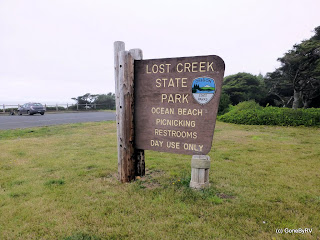 The first thing we noticed was the huge climate difference between Sutherlin and here.  Only a couple hours distance apart, but approximately 20-25 degrees cooler over on the coast.  Whaler’s Rest is positioned on the east side of Rt 101 (the coastal highway), but there is an access path very close to our site which takes us directly across Rt. 101 to Lost Creek State Park.  Then beach access is a snap! 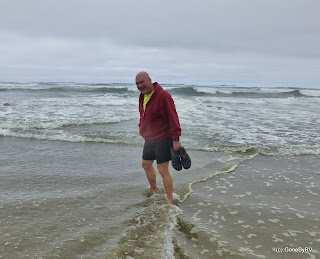 We walked down to the water line just after noon today and the tide was out.  I did have to do the official “dip my toes in the Pacific Ocean” thing. Man, is that water cold!!!! 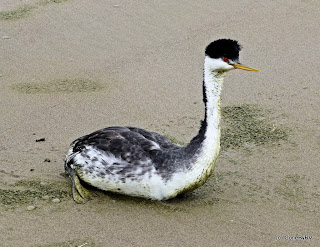 Along the way we saw this little guy who appeared to be injured. He didn’t move as we got very close and it looked as though he was attempting to pull himself back toward the ocean.  I hope he made it. 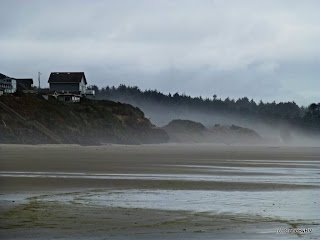 The beaches are beautiful in a very different sort of way from other areas of the country we've visited.  It's midday here and you can still see a heavy mist hanging over the coastline.  Very few folks out here and it should make for some very nice beach exploring and walking.


I’m not sure when the next post might be, but we’ll attempt to search out an area where we can get a decent Verizon signal to hook up the computer.


Thanks for dropping by to take a  look!
Posted by Steve and Karen at 6:12 PM