Yesterday's weather was just flat out gorgeous here on this part of the Oregon coast. After checking the weather reports for coming days, we decided that it would be a good day to do a bit of exploring, hiking, and beaching. 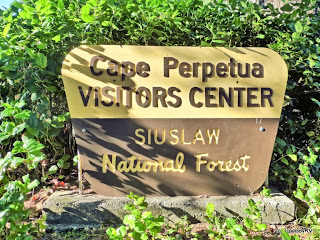 A look at the map indicated that the Cape Perpetua Scenic Area located just 20 miles to our south (just south of Yachats) sounded like it fit the bill. 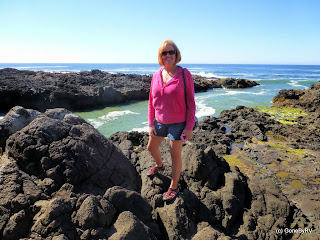 We were not disappointed.  The sky was very clear, temps in the mid-60s, and the tide was going out as we arrived.  This area was formed long ago when the hot lava flowed to the sea. The craggy rocks create some interesting features where the land meets water.

The first feature located just down the Captain Cook Trail from the Visitor's Center is called Spouting Horn.  Unfortunately, this feature is best viewed when the tide is high.  The inrushing water is forced up through a small hole in the lava rock and creates a pretty spectacular show. (We just saw a "small" spouting, so I guess we have another reason to return.

We've come to love exploring the tidal pools along the coast. Here's a picture looking to the south at mid-tide. 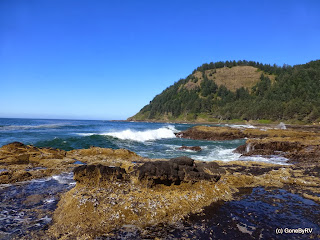 Barnacles cover these rocks and are easily viewed when the tide recedes. 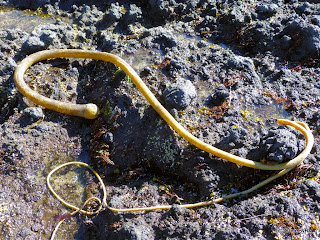 These plants break loose and wash up on the beaches occasionally.  They are called bullwhip kelp and can grow to great lengths.  The nodule at the top is filled with carbon monoxide. 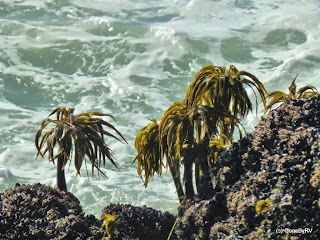 These plants are very tough in  my opinion. They are called sea palms (Postelsia) and cling to the rocks. I watched them get pounded repeatedly by the surf, but they just kept swaying back and forth. 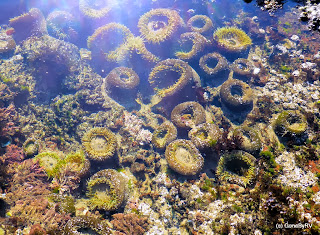 A closer look into the tidal pools allows you to observe all sorts of sea plants and animals.  Here's a picture of the very common sea anemone, but they are still fun to watch. 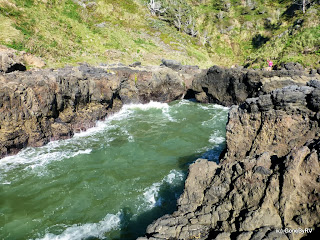 Walking further south along the beach we came to an area named the Devil's Churn. It's an area where the water rushes into a narrow chasm created in the lava rock and violently crashes into the rocks. 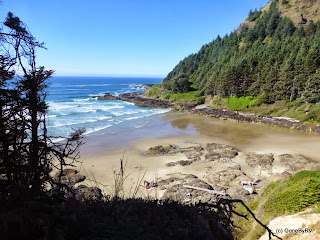 This is a picture of Cape Cove located just south of the Tidal Pools and Devil's Churn. Quite a nice area for playing on the beach when the tide is going out. 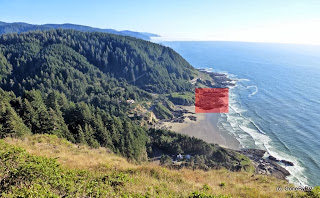 As the day was slipping away, we left the beach area and drove up the Forest Road to the top of the cliffs overlooking Cape Perpetua. We're really glad we did as we were also able to view quite a number of whales spouting just off shore. This view (indicated by the red box) shows where we had been earlier in the day exploring the tidal pools. 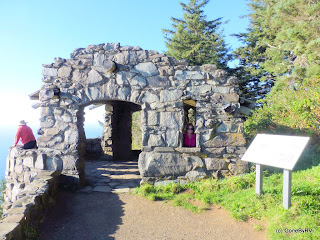 This stone structure is named the West Shelter and was constructed back in the 1930s by the CCC workers.  Today it provides a wonderful vantage point for viewing the Cape Perpetual area below. 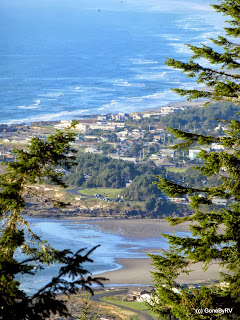 Just on the north side of the West Shelter was our view looking toward the little town of Yachats and beyond.

Another great day on the Oregon coast! Hey, we've come to really enjoy Oregon after spending some time in different parts of the state.  We knew very little about the state prior to these visits. We've already decided that we want to return again.

Thanks for dropping by to take a look!
Posted by Steve and Karen at 7:32 PM