While traveling along the coast the past few days we had seen some whale activity from afar when we made stops at the scenic turnouts and used the binoculars. The area near Depoe Bay is considered one of the prime spots to whale watch as there are a number of whales which stay in this area year round.

We decided it was time to take a closer look if we really wanted to be able to view the whales. There are several companies in Depoe Bay which take people out on fishing excursions and do “whale watching” trips as a sideline business to increase revenue.

We wanted to learn something about the whales and their habits rather than just go for a boat ride. One such company seemed to fit the bill nicely. Whale Research EcoExcursions  is owned and tours are personally guided by Carrie Newell, a marine biologist, who has spent the last 20 years studying the habits and following the paths of the grey whales which inhabit these waters. 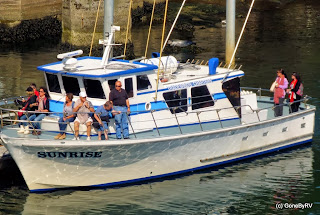 Another choice we had to make was what style of boat would get us closer to the whales.  Several companies offered large boats which hold 40-50 people. 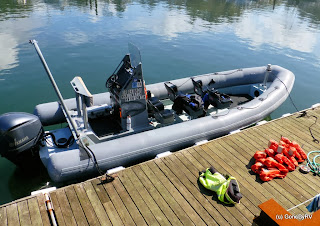 We decided that a smaller boat not only offered a more “personal” tour (since the Zodiac-style boat only holds 6 passengers, plus the captain), but it would put us lower to the waterline and be able to roll with the waves a bit better and offer greater maneuverability. This is the type of boat which Carrie pilots when looking for the whales. 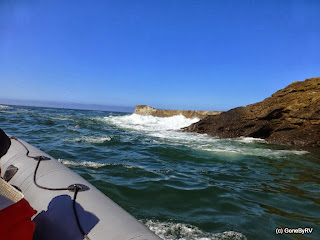 Depoe Bay’s harbor has a very narrow passageway to get to the ocean, but the Zodiak took the surf quite nicely. 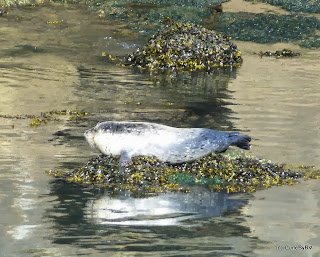 We also saw a few harbor seals lounging on the rocks as we exited the harbor. 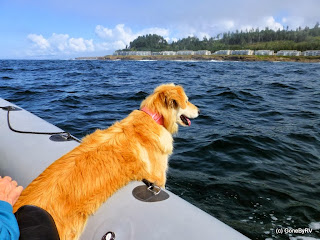 Carrie’s dog is named Kita and accompanies her on all of her excursions. We quickly found out that Kita is not along just as an extra passenger, but within the past few months as learned to bark when a whale spout is first observed. She was a very well-behaved dog.

Let me apologize in advance for the lack of pictures of the actual whale sightings. A couple of things contributed to this. First was Carrie’s rule that no one was permitted to stand in the Zodiac. Completely understandable and with the swells we were encountering yesterday, it just would not be a good idea. Secondly, did I mention large swells. Many times, when a whale was spotted a large swell would roll between it and our boat and you would lose sight of it altogether. Lastly, have you ever tried to photograph a whale when you didn’t know exactly where to look to begin with, and then get a quick shot off before it went under again? All the while doing this from a sitting position? 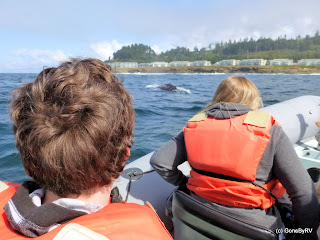 Keeping the above in mind, here’s two shots I got that will at least let you know that we did actually go out into the ocean and find a few whales.

Carrie explained that fluke sightings (whale’s tail) are not all that common.  It depends upon a number of factors, but much has to do with the depth of the water. Whales show their flukes when they are diving straight down to look for food.


We really knew very little about whales (and grey whales in particular) before taking our excursion. Adult grey whales usually grow to 45-50 feet in length and weigh 45-50 tons in this area of the world.  They have no teeth and feed on very small shrimp called krill. The whale opens its’ mouth and takes in a huge amount of water containing the krill which are “filtered” through over 300 baleen, which is similar to keratin in humans. The whale’s tongue expels the excess water by pressing against the baleen. 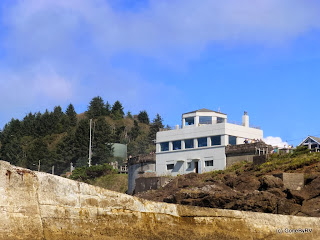 If you would like to learn more about whales and whaling in Depoe Bay’s history, be sure and visit
The Whale Watching Center located on the main street on the south side of the bridge.

I can’t say enough good things about our whale excursion with Carrie (and Kita). If you want to view whales up close, there are a number of companies which could get you there, but if you really want to learn something about these great creatures, then Carrie Newell has the knowledge, experience, and a real passion for whales. Her excursion is not the cheapest of the possible companies in Depoe Bay ($40 per person for a 1.5 hour excursion), but I think you’ll come away very happy. We did! (And to think, I got paid nothing for the above commercial.)

Thanks for stopping by to take a look!
Posted by Steve and Karen at 11:52 PM