Last Tuesday we left the Oregon coast and traveled to Redding, CA for an overnight stop enroute to our present location at the SKP-Coop Park Sierra near Coarsegold, CA.  We wanted to visit this SKP-Coop for two reasons.  First, we are trying to see as many of the SKP-Coops in this part of the country as possible while we're in the west and secondly, we wanted to visit Yosemite National Park.

Well, I guess we accomplished one of our goals.  Since our government can't work together to solve problems, the American people wishing to visit OUR national parks and monuments are currently out of luck.  Oh well, it will give us a reason to return to this part of the country again. Ok, that's it, the end of my political statement for today. 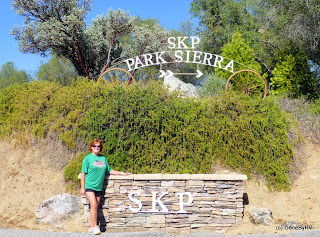 The SKP Park Sierra (POS) is a very different park from many we've seen in the SKP system of parks.  We really like this park.  It is not laid out in a typical "cookie cutter" side-by-side format. 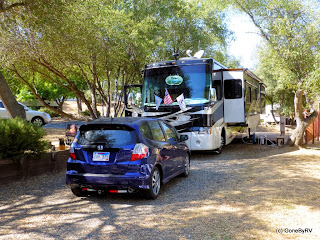 The park almost has a "state park" feel to it.  Sites are irregularly spaced and angled and the entire park has lots of trees, rocks, and wildlife. Here is our site, a pull through, but both back-ins and pull throughs are present. 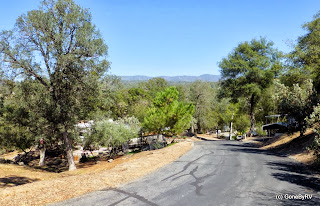 The area is very hilly as we are in the Sierra Mountains only about 28 miles from the entrance to Yosemite Park.  Because the elevation here is about 1900 feet, the temperatures are a bit more temperate than in the valley floor (in nearby Fresno) below.  Residents here say that snow is relatively rare in the winter. We like the hilly versus flat terrain of many parks. 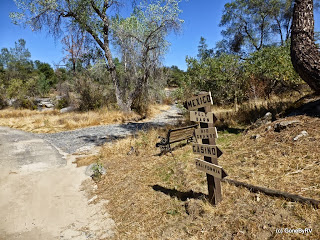 There are plenty of trails for walking and hiking. The back 40 acres of the park are undeveloped and kept as a buffer to surrounding communities. Here's a "tongue in cheek" sign leading to the trails. 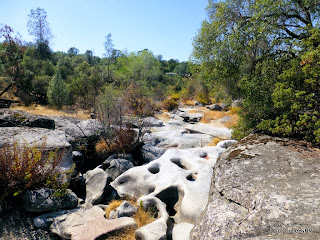 Although the Coarsegold Creek is completely dry at this time of the year, the spring thaws bring a surge of water down from the higher elevations.  It's kind of hard to envision when you're standing above these well-worn rocks. 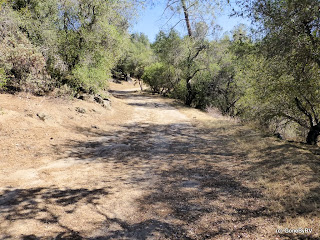 Every morning we take a walk around and thru the park.  We discovered this dirt road area just outside the northern boundary of the park.  It was once the stagecoach route to Yosemite Park many years ago.  Today, it's just used as an emergency fire road.

The POS is totally owned and run by the members of the park.  They've done a very nice job of creating the infrastructure.  They have a very large clubhouse which houses a full commercial-style kitchen, a library for both books and videos, a craft room, a very clean laundry room, an exercise area, and of course a large hall for meetings, dinners, and socials.


We are very much enjoying our stay here at Park Sierra.  Should we ever decide to become a member at one of the SKP Co-ops this would definitely be one of the parks under consideration.  The people we've met have all been very friendly and there is a true community atmosphere here. 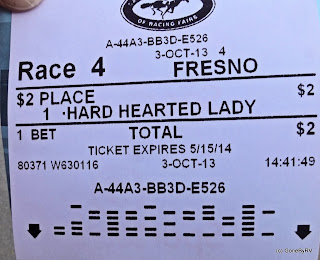 Well, since we couldn't go to Yosemite Park, we did the next best thing.  (Not really, but it was pretty fun!)  On Thursday we attended the Big Fresno Fair. (Yes, that's really the name)  As far as local fairs go, it's pretty large.  There's a large carnival midway and a smaller "kids" carnival in the infield of a full fledged horse racing track.  We decided that this was our big chance to strike it rich, so we placed a bet on the fourth race. 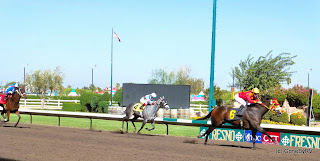 As you can see by our bet,  $2 wasn't going to break the bank.  It's a good thing, too, as our horse came in third (and out of the money for us). He's the one in the far left side of the picture. 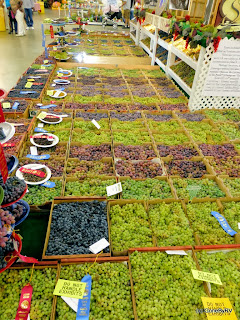 After our track experience, we visited the agricultural, home arts, and commercial buildings.  The area around Fresno has a lot of agriculture, so there is no shortage of goods to present for judging. There are many, many vineyards nearby. 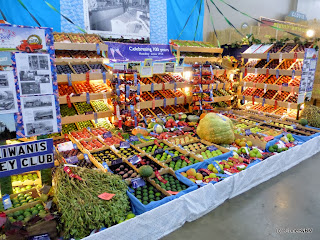 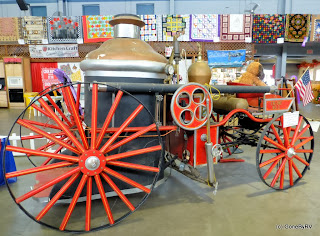 The home arts building had a lot of beautiful quilts on display. You can see a small number of them hanging from the railings in this picture showing a restored fire engine. 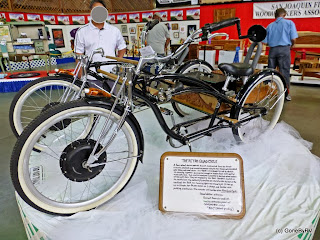 I just took a picture of this "strange" bicycle because I thought it was a pretty clever bit of engineering by a local.


So, no Yellowstone NP, but we're still having a great time!  The weather has been very nice.  Temps. in the high 70's and NO rain.

We'll be here a few more days before continuing our southward journey for the winter.

Thanks for stopping by to take a look!
Posted by Steve and Karen at 9:21 PM