Written from Hermosa, SD      (Click on Pics to Enlarge) 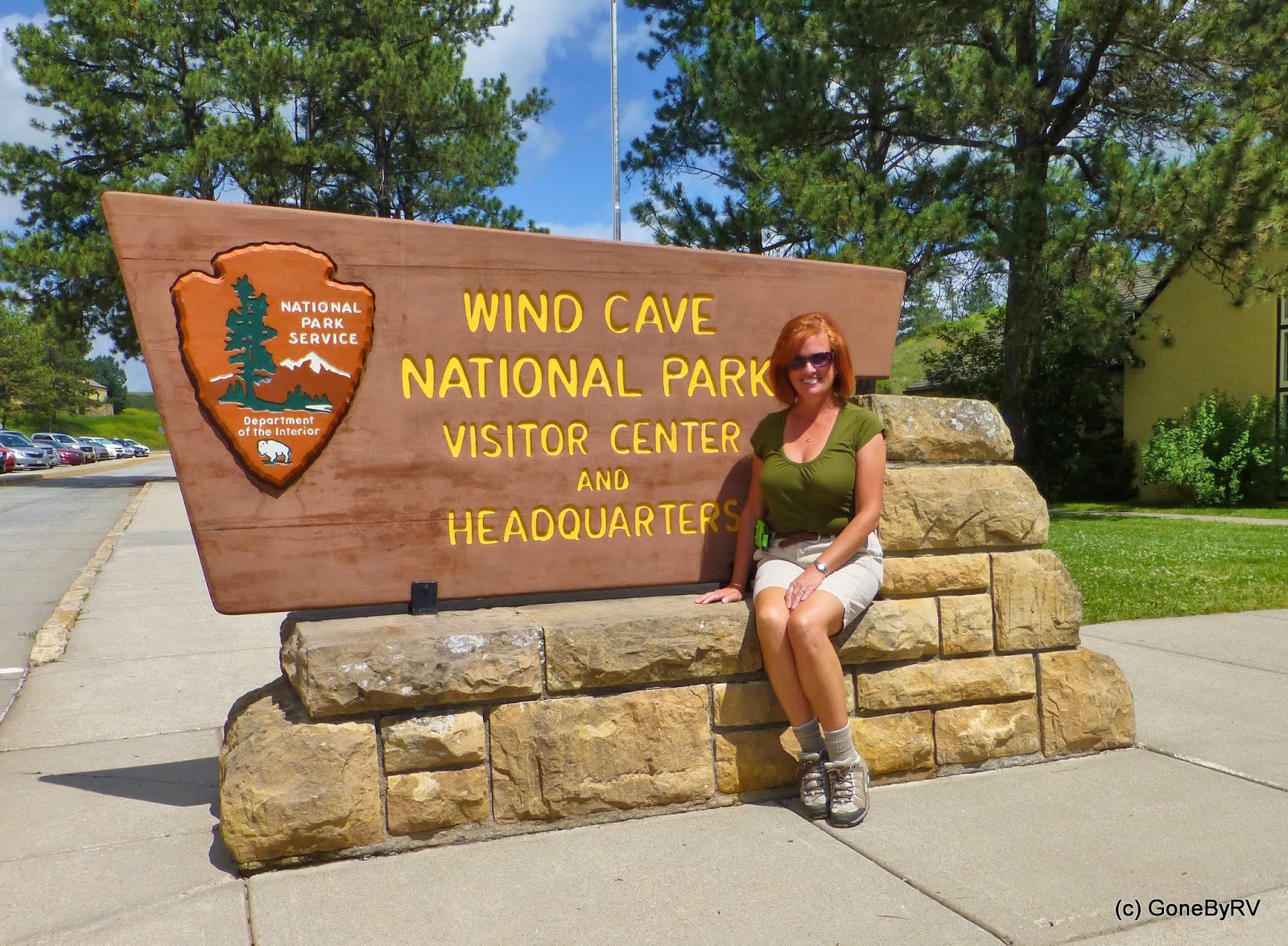 On Saturday Karen and I drove 40 miles south of our present campground (Heartland Campground) to visit Wind Cave National Park.  Wind Cave NP was established in 1903 and was the eighth park created.  It holds the distinction of being the first established to protect a cave.

Just an abbreviated history of the cave.  The natural entrance to the cave was discovered by Tom and Jesse Bingham in 1881 while searching for gold in the area. By 1890, the South Dakota Mining Company held the stake for the land where the cave was located. J.D. McDonald was hired to be the manager of the cave by the company.  Alvin McDonald, the 16 year old son of J.D. McDonald fell in love with exploring the cave.  He is credited with much of the early exploration of the cave. In fact, he kept a daily exploration diary of his adventures between 1891-1893. Hoping to cash in on the cave, after gold exploration in this area yielded little results, the cave was opened to tourists.  Seeing that the cave was being negatively affected and actually "harmed", the Federal Government stepped in by 1903 and declared the cave part of the Wind Cave National Park. 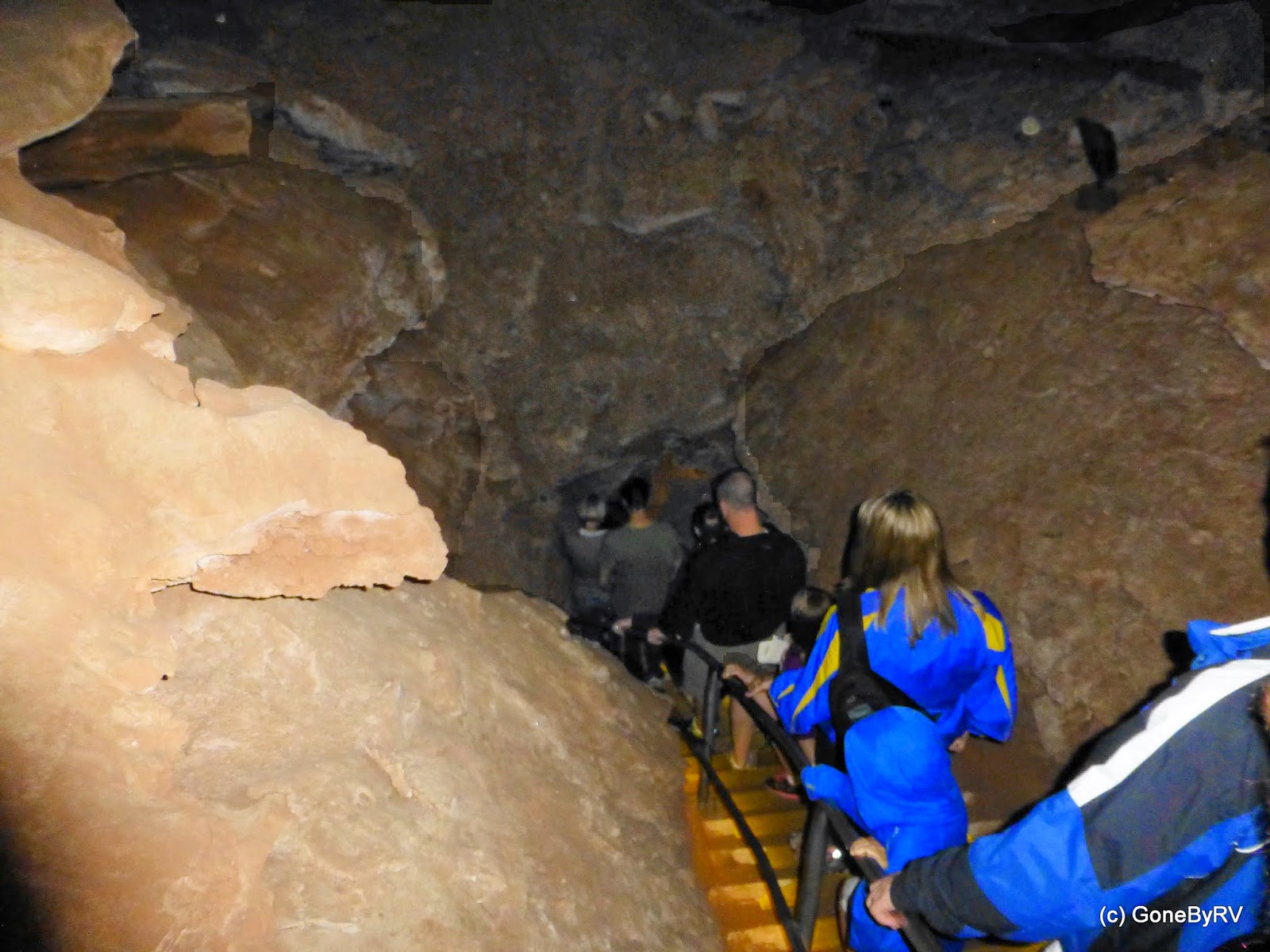 The NPS describes this park as the best of both worlds.  Meaning the cave system beneath the ground, and the vast grasslands for wildlife above.  It certainly does not disappoint. Entrance to the park itself is free, but admission is charged to take various cave tours.  We decided to take the "Fairground Tour" which costs $12 each for non-discounted adults.  The tour lasted approximately 1 1/2 hours and was excellent.  The tour guide was very knowledgeable and the cave itself was spectacular.  The Fairground Tour begins by taking an elevator beneath the surface before the walking descent. 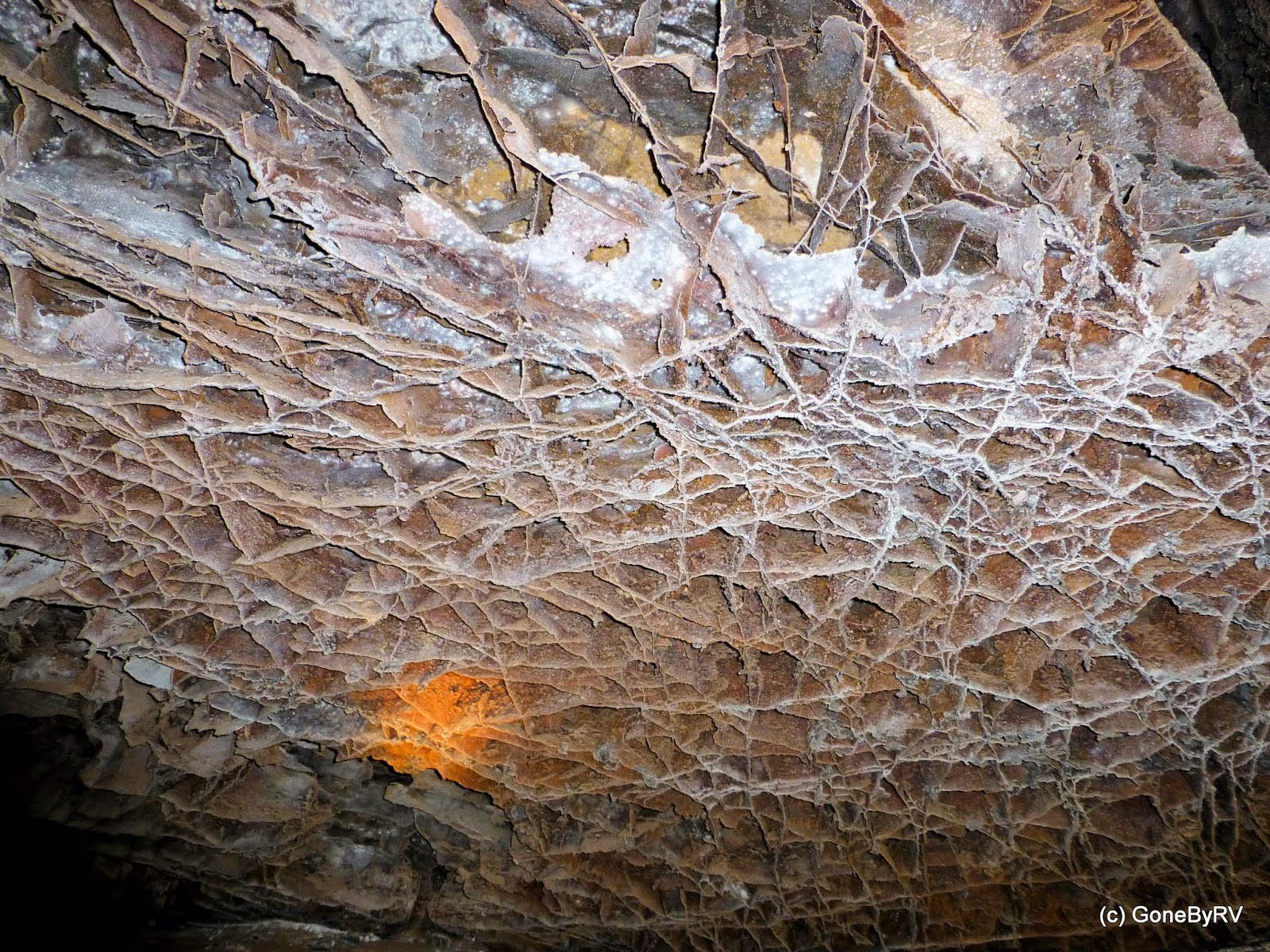 The cave is described in layers such as upper, middle, and lower. Exploration of the cave is an ongoing process yet with over 100 miles of discovered passage ways, it is one of the largest cave systems in the world. What is even more amazing is that the 100 miles is confined to just 1 square mile of surface area if viewed from above. This cave boasts formations known as boxwork. Rather than me butcher an explanation of how these unique formations are created, please take a look at Wikipedia's information on the subject. The boxwork structures are extremely fragile. 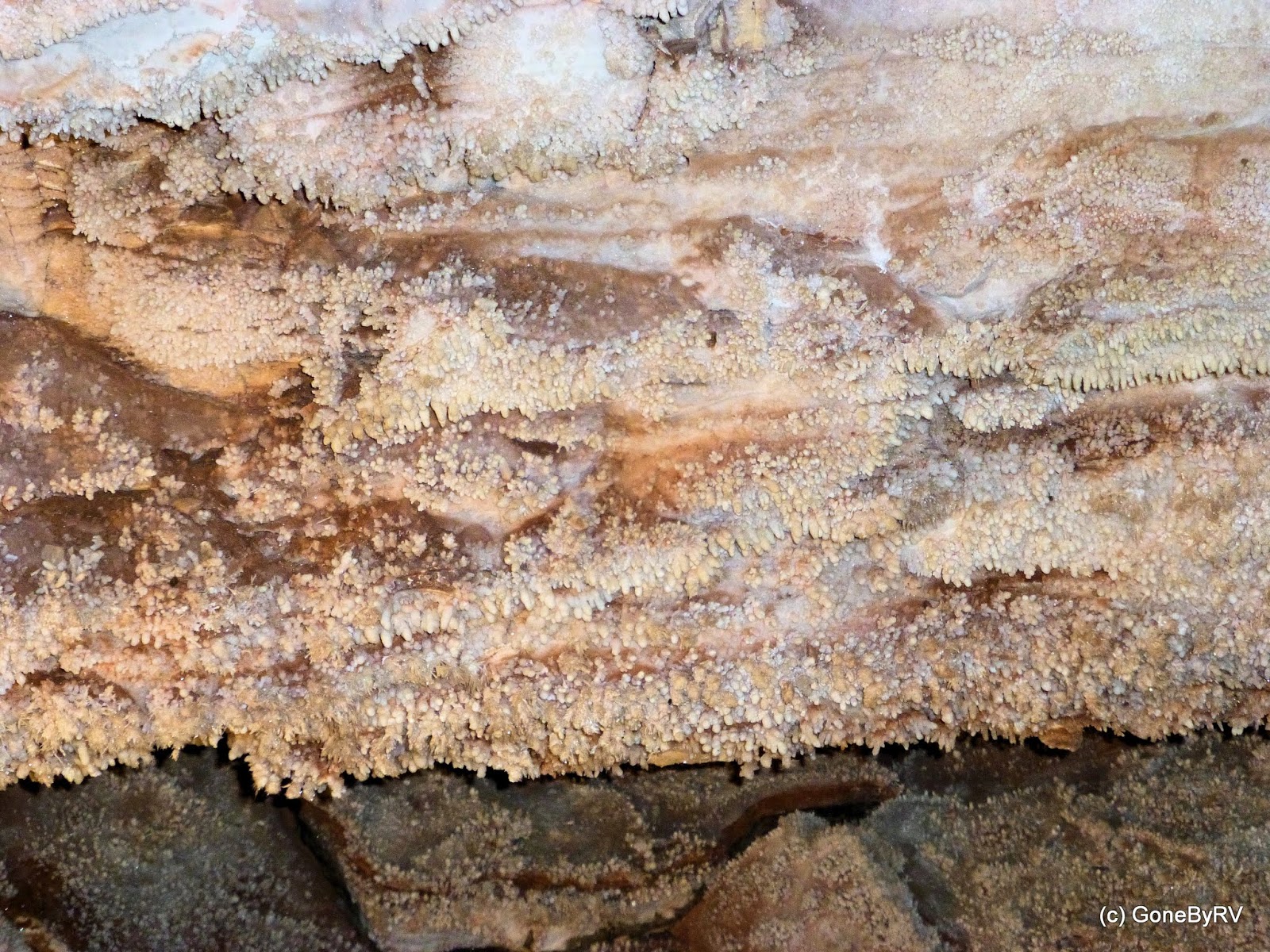 Cave popcorn, or coralloids, are not nearly as unique as the boxwork found inside, but still unusual and beautiful to view. 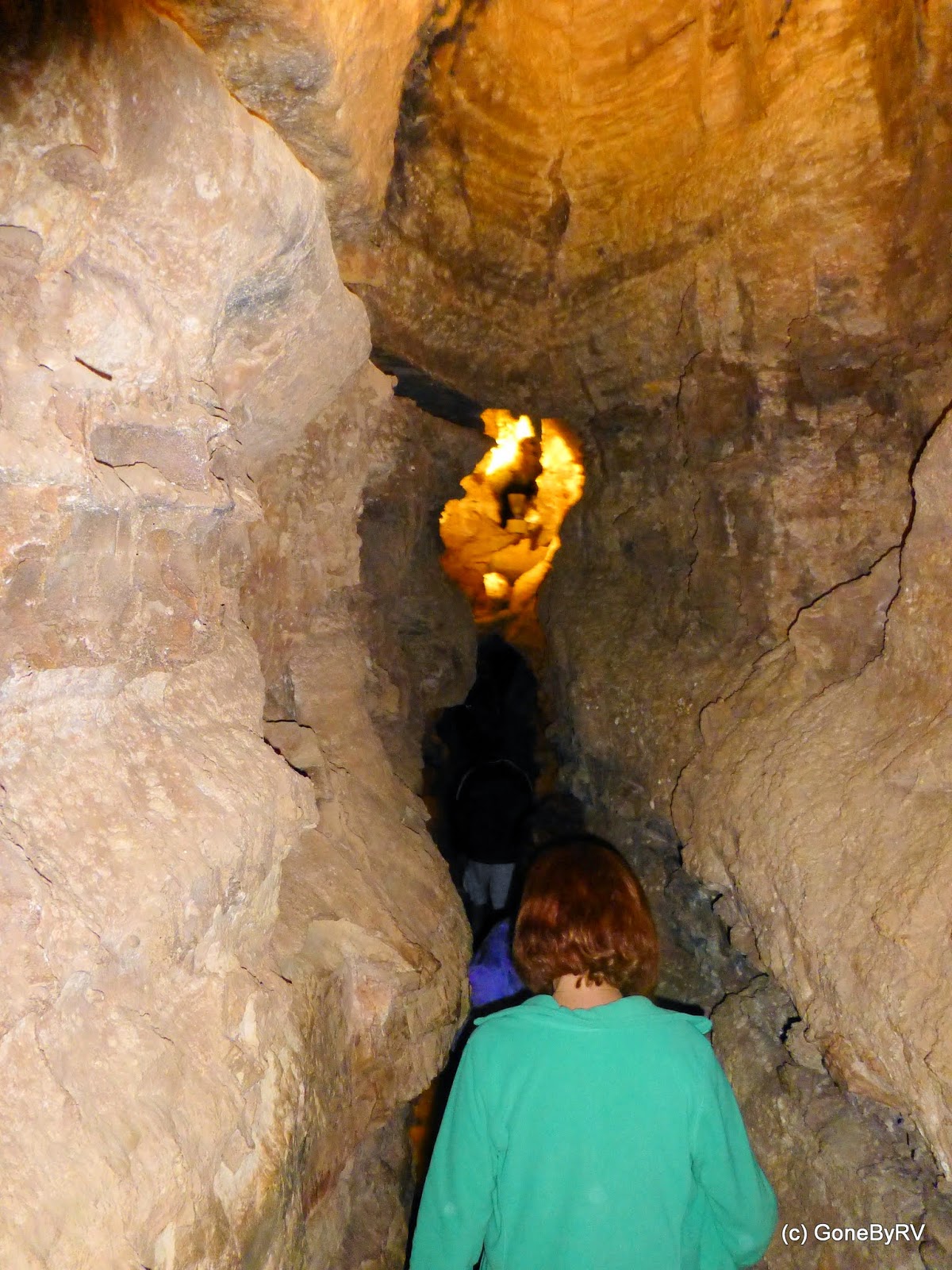 The cave maintains a consistent temperature of 52 degrees year round.  A jacket is recommended. 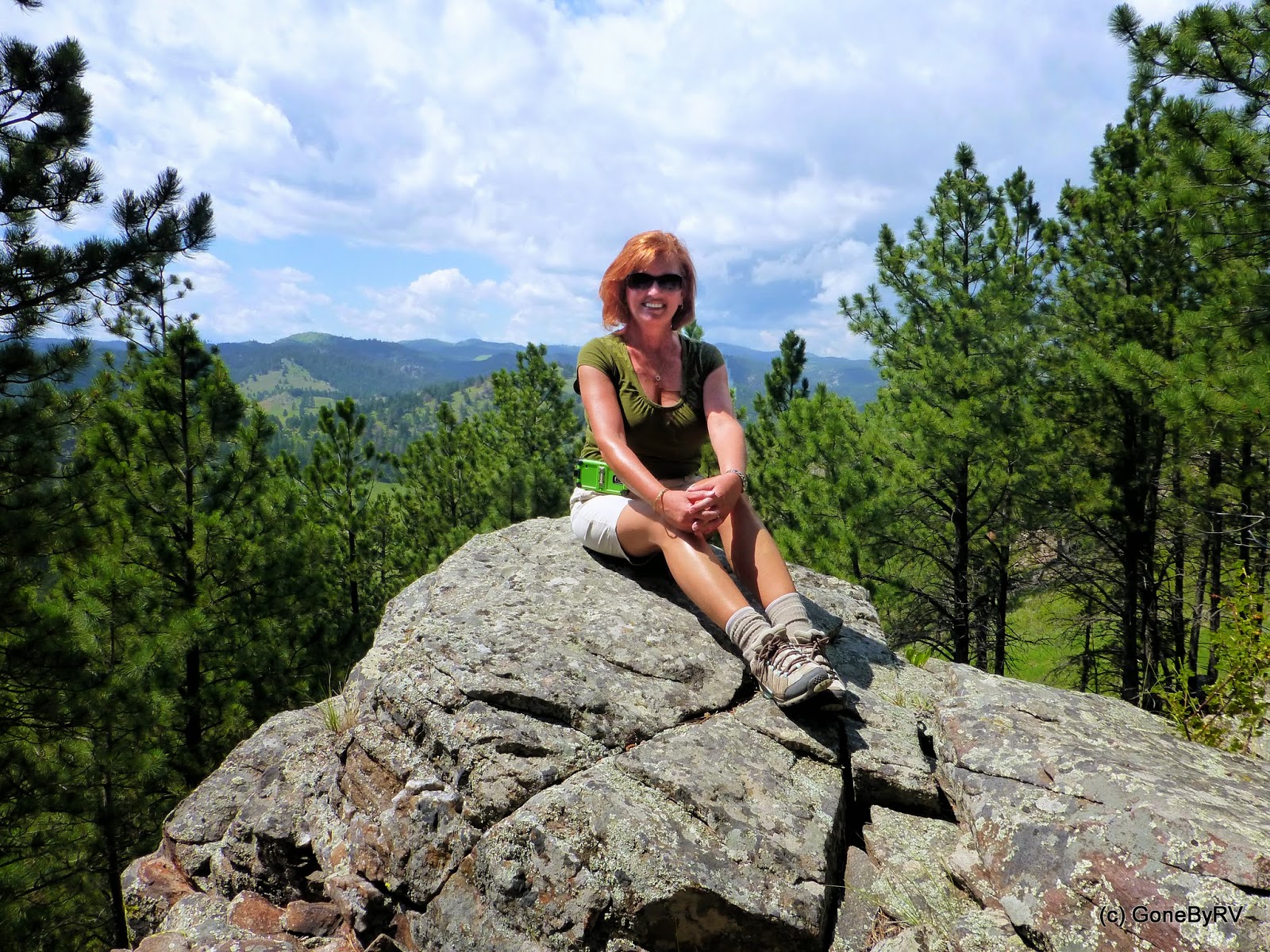 After visiting the cave we were anxious to explore the above-ground portion of the park.  We decided to take a short hike up Rankin Ridge Trail to the fire lookout tower.  Ok, the hike was short, but it's always nice to take a break.

We were certainly not disappointed with the view once we reached the top. 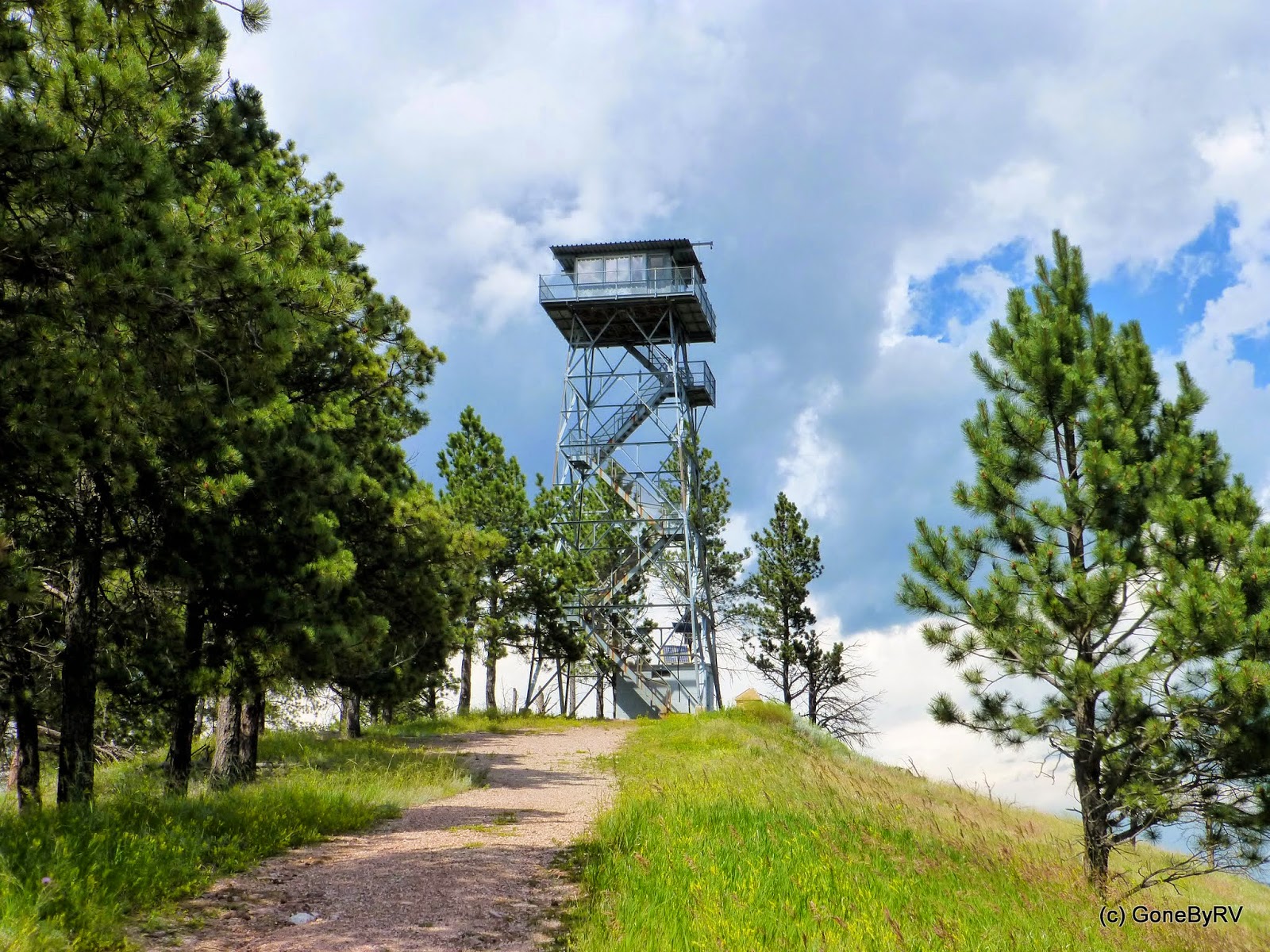 This is the fire lookout tower on the top of Rankin Ridge.  Many of the towers we've visited allowed visitors to walk up to the observation deck. 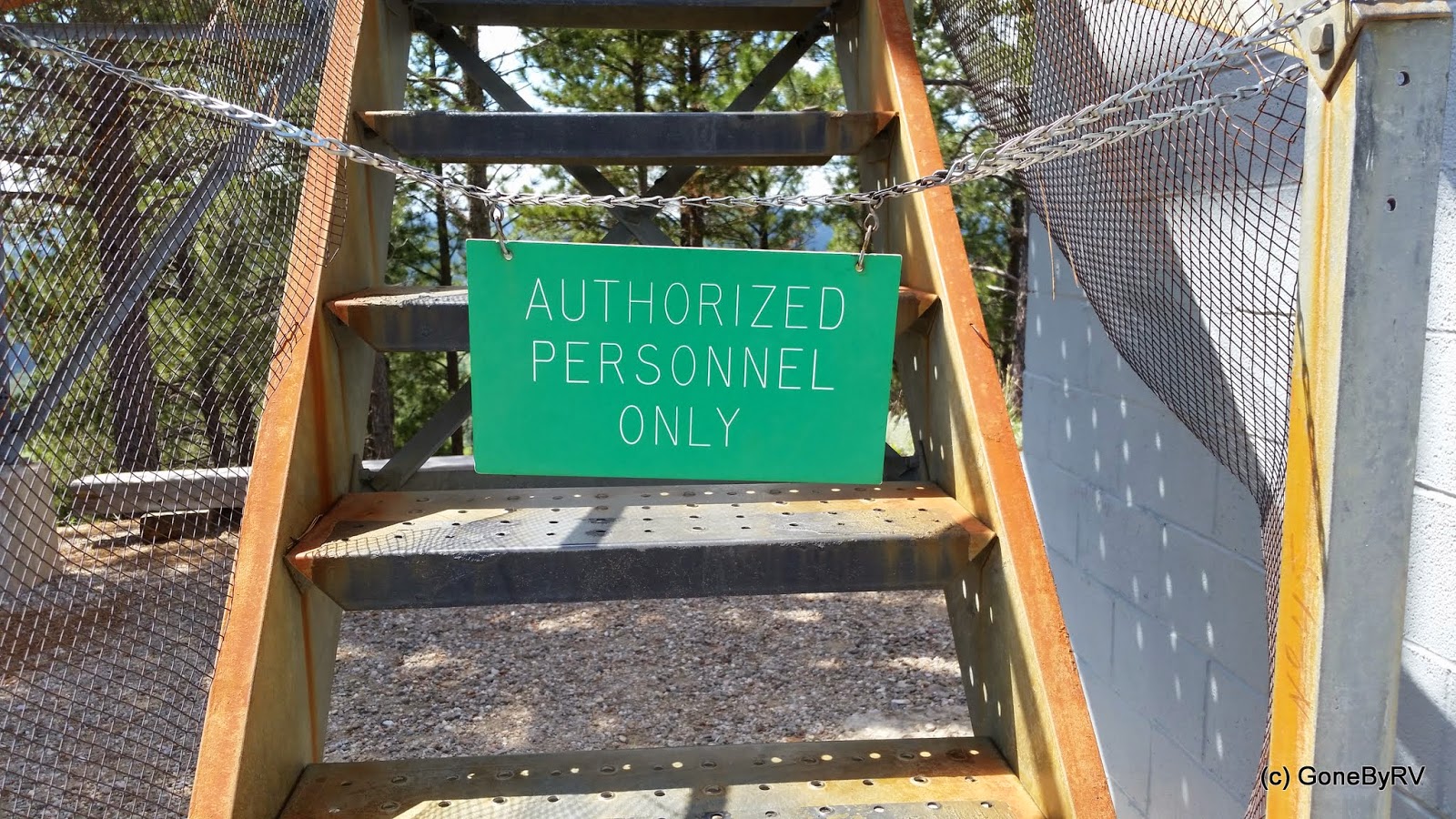 Not this one, however.  A bit of a bummer, still worth the trek up the trail. 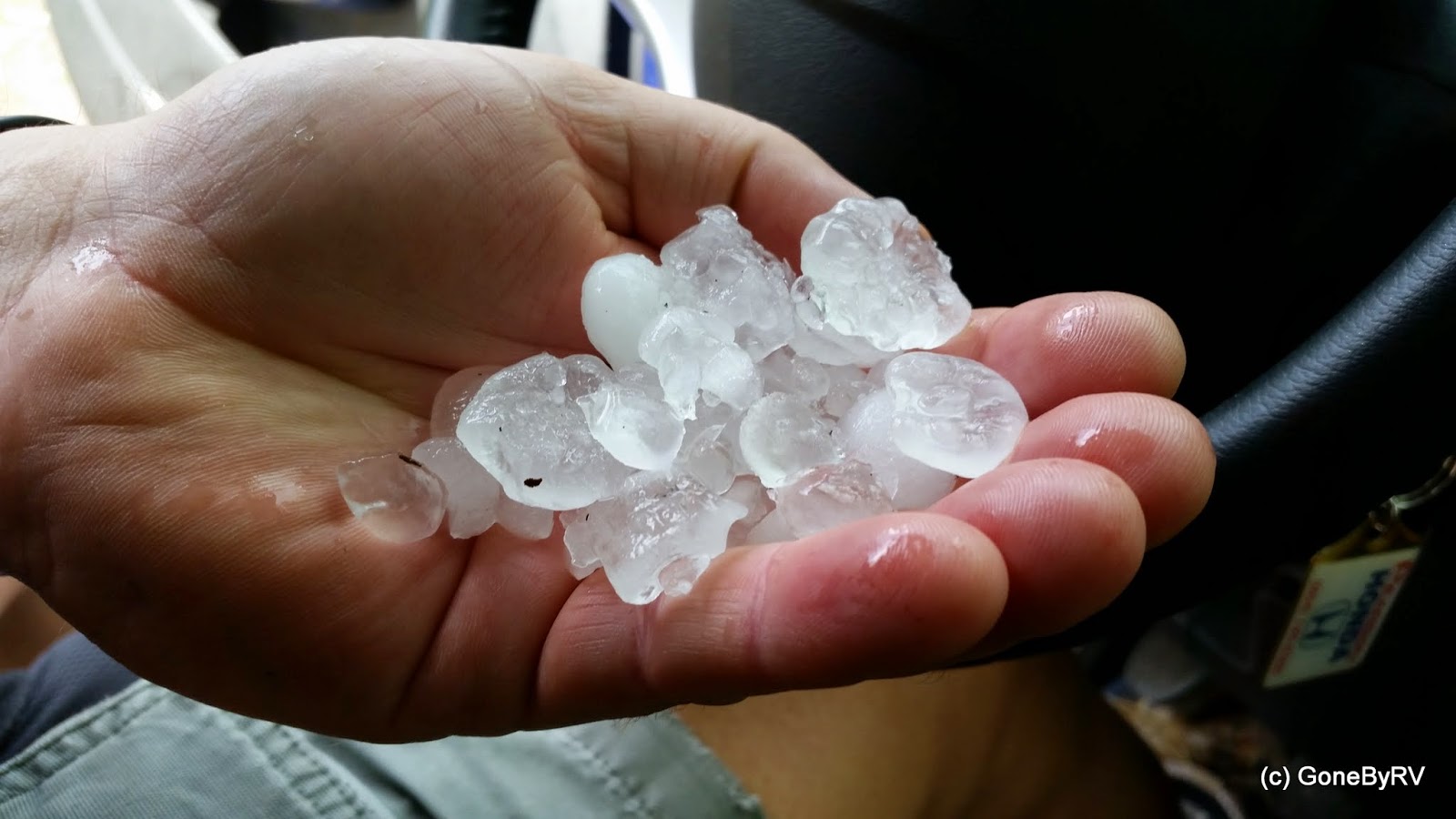 Notice the blue skies with the fluffy clouds in a few of the previous pictures?  Well, between arriving back to our car and heading back north  to Custer State Park (a drive of maybe 30 minutes), the skies darkened and we could see rain in the distance.  Apparently we were following the storm by a safe margin as we got no rain.  We saw signs of leaves blown all over the park's roads and pulled over to pick up some hail.  Glad we missed that one. Weather systems in this area seem to roll through very quickly.  We've had several afternoon storms since we arrived, but they head east and past us in short order. 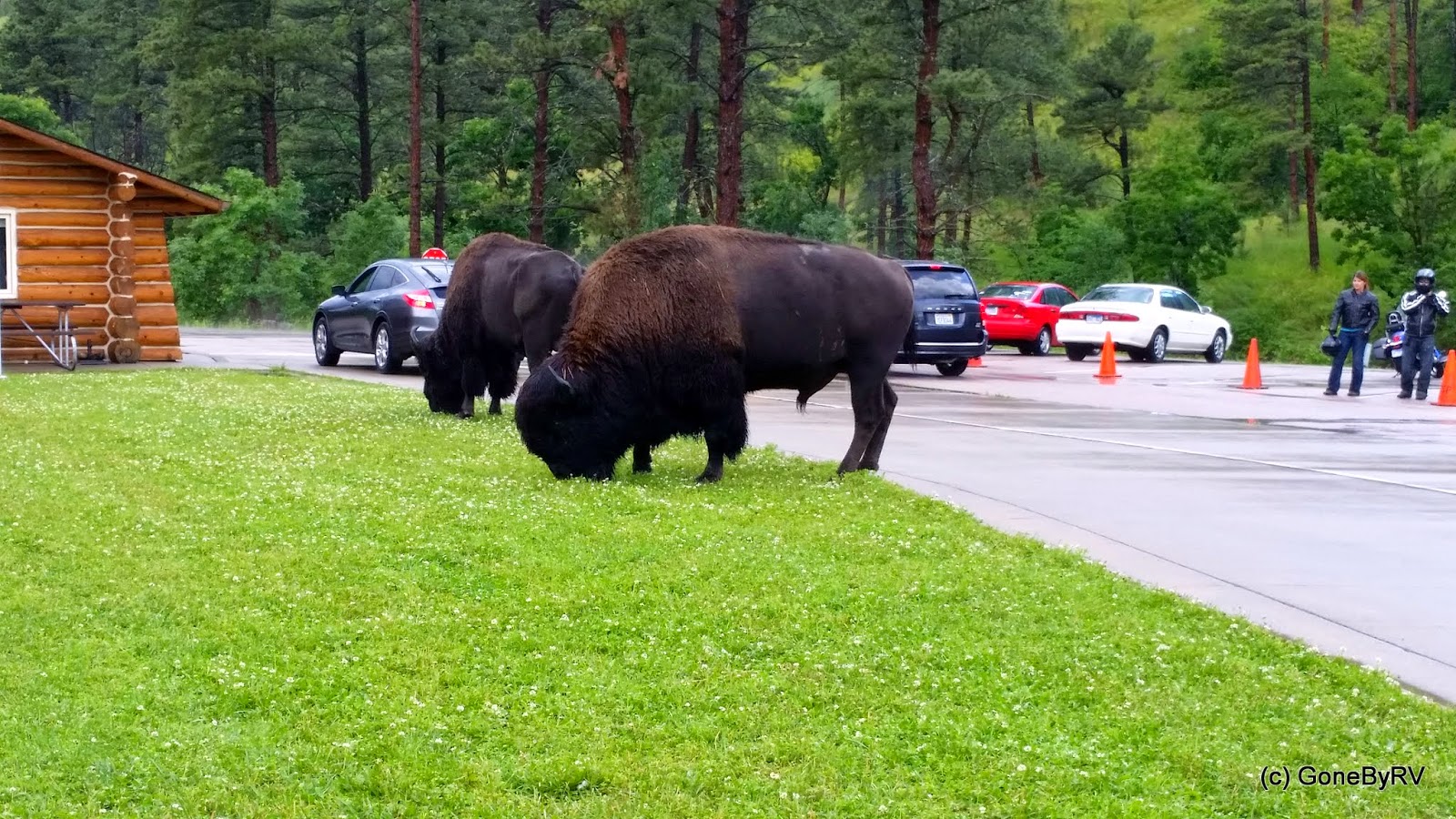 As we were leaving Custer State Park to head home we happened upon these two guys.  I keep telling Karen that they are "stationed" at the front gate just to draw in visitors.  That's certainly not the case, obviously, but they certainly don't mind the cars stopping or people taking their pictures.