We left Papillion, NE last Tuesday and traveled about 275 miles to Mitchell, SD.  What's in Mitchell, SD you ask?  Well the Corn Palace, of course.  Never heard of the Corn Palace?  Actually, I knew very little about it until we paid a visit yesterday.  We usually try to visit the local information center when we first come into an area we're unfamiliar with. 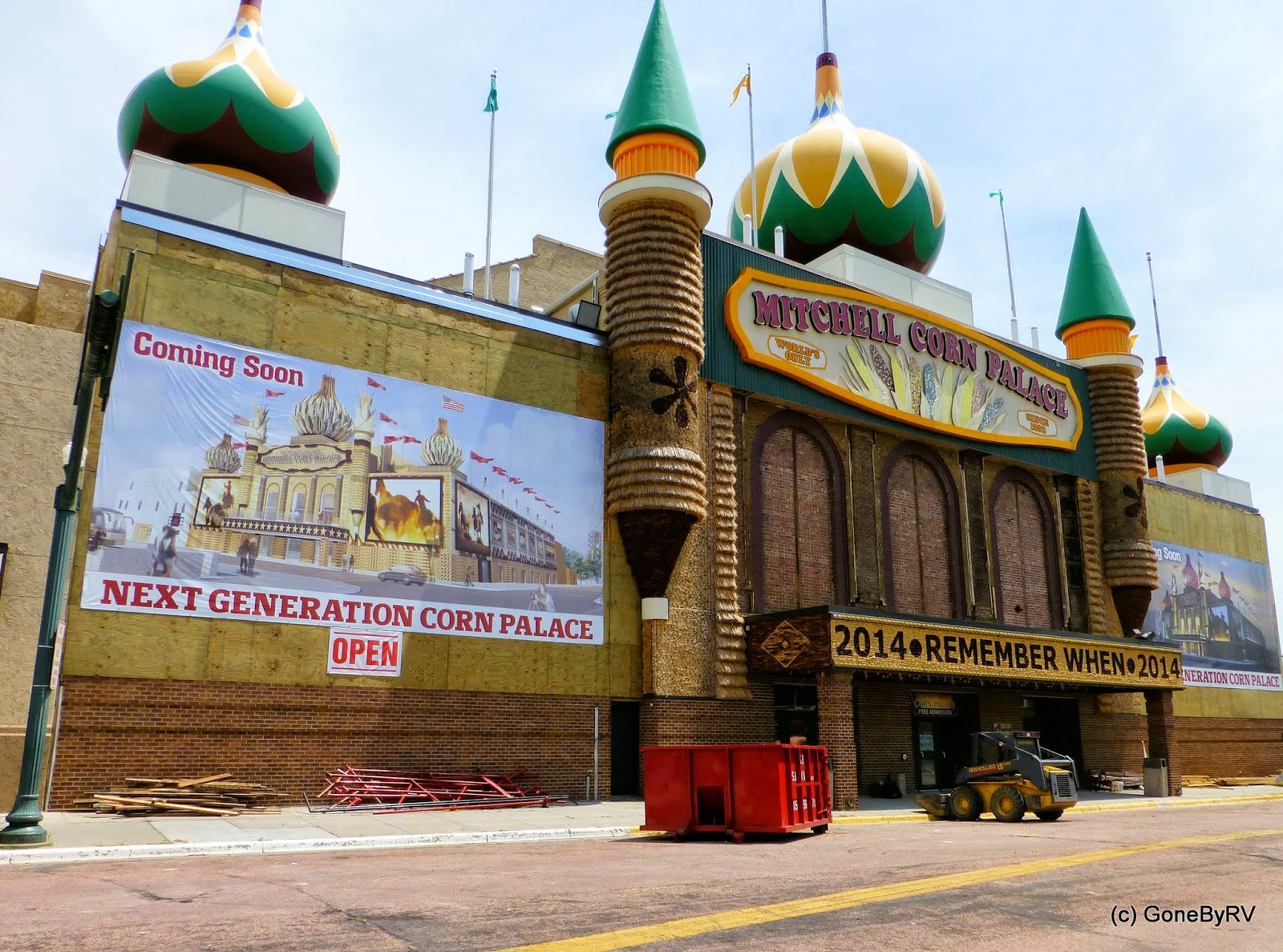 The Corn Palace was originally called the "Corn Belt Exposition" and began in 1892. Early farmers displayed their wares on the exterior of the building to show the fertility of the region.  The current building has been on the same site since 1921.  Still holding true to the re-designing of the exterior walls each year, the Corn Palace is undergoing work for this year's rendition.  If you visit toward the end of the harvest season, the murals would be in place. 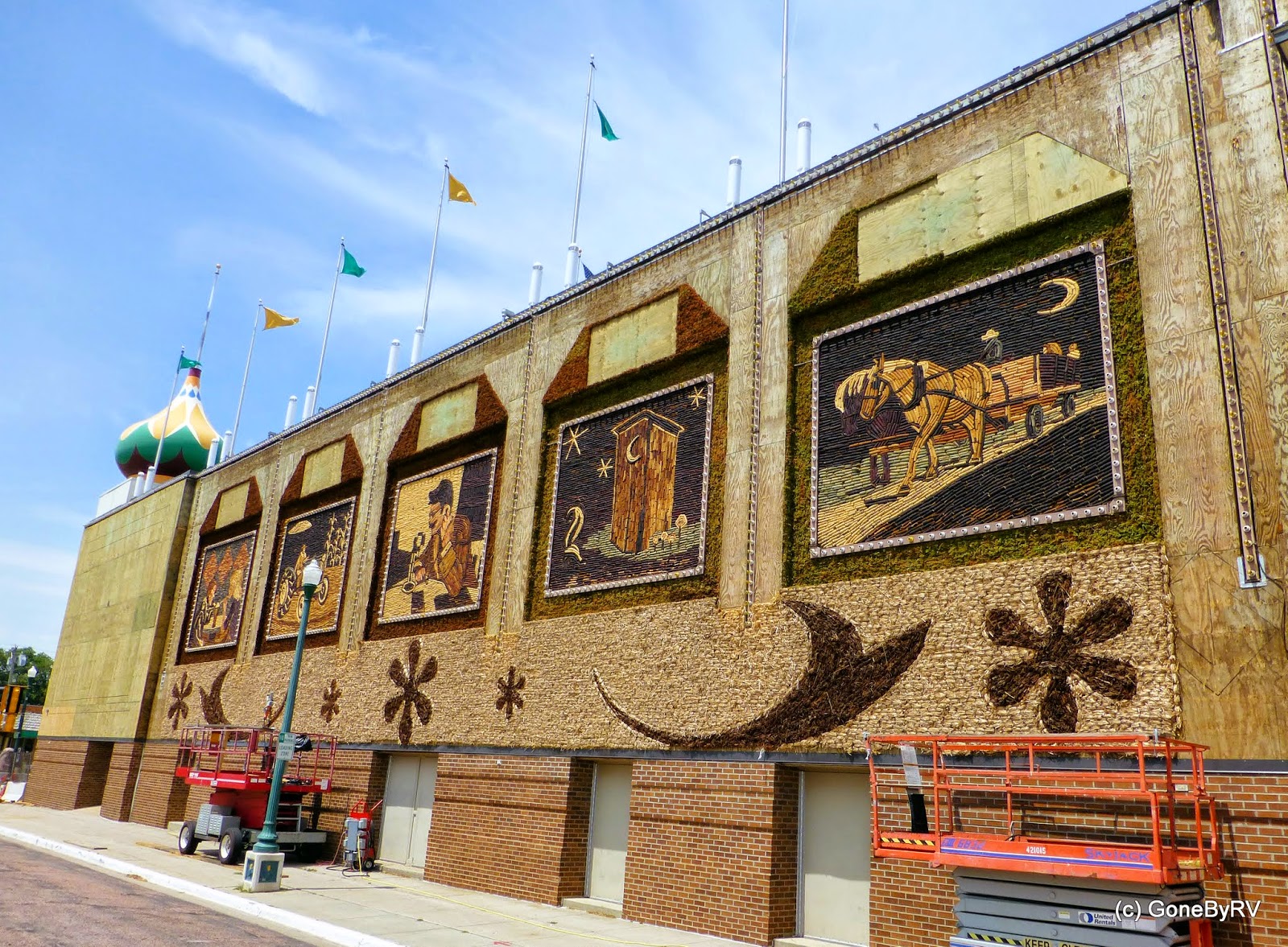 The murals are truly works of art as they are all built using different colors of corn cobs (grown in separate fields to maintain purity) and husks and then cut and nailed to the wall. 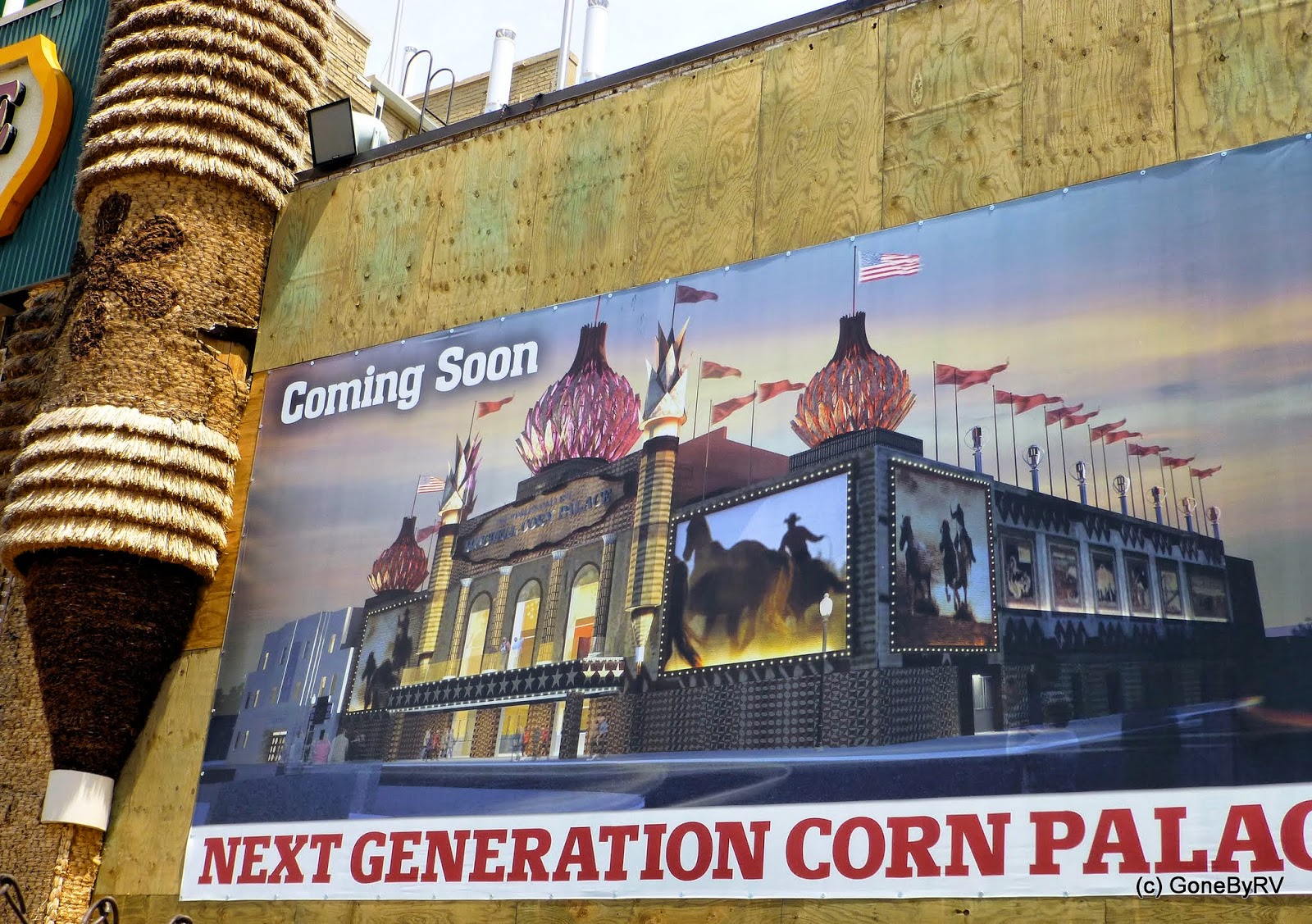 Here is an artist's  rendition of what this year's final product will look like when finished.

The building itself has been used for many sporting and entertainment events throughout the years. I was surprised to see how many "big name" entertainers had performed here. Take a look here if interested. 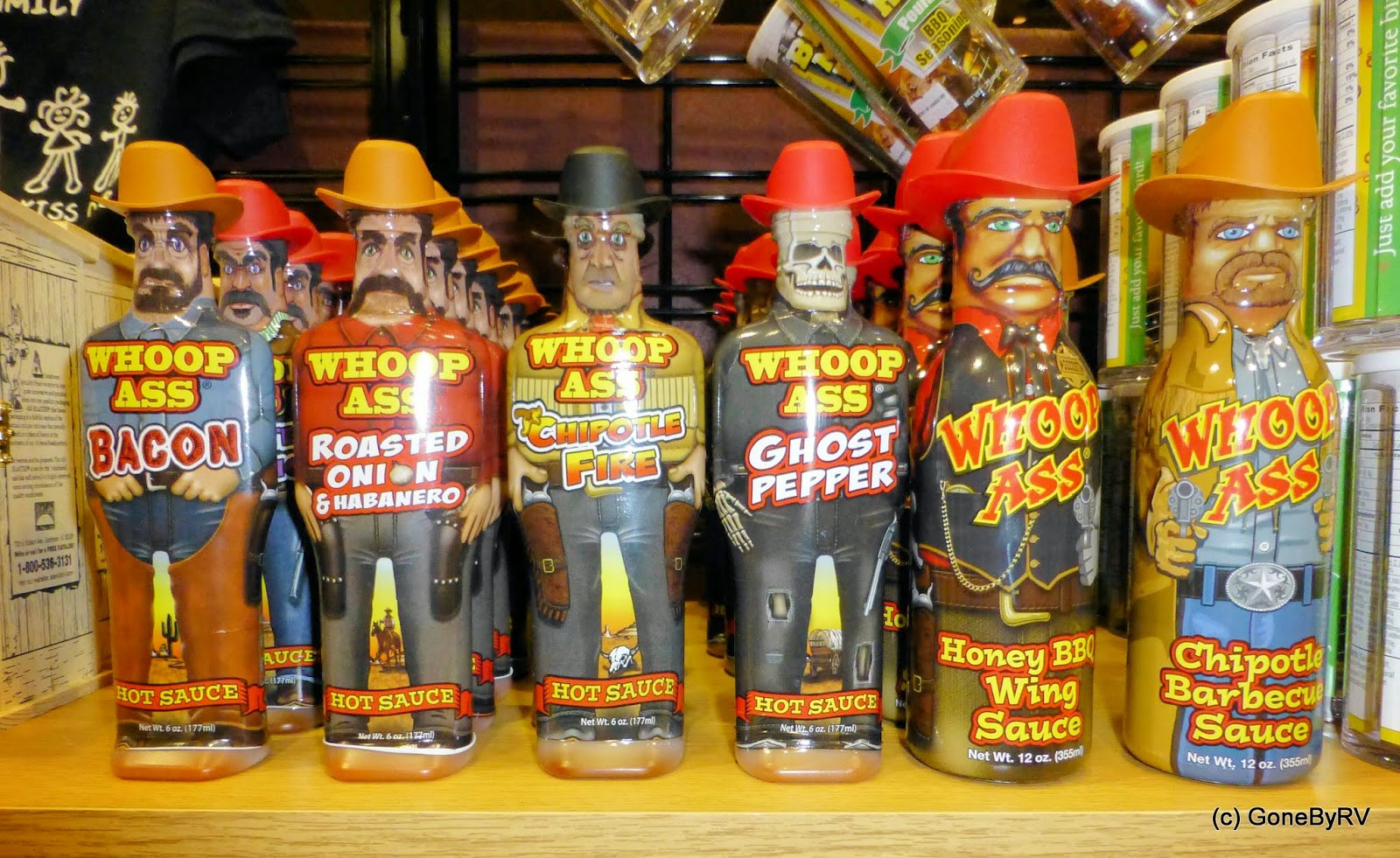 The inside of the building houses murals which are permanently on display on the walls. Naturally, there is a very large retail area to buy nearly everything "corn" including different varieties of popcorn, kitchen implements for cooking corn, and even ancillary items which might be eaten with corn.  I thought this brand of hot sauce was cute. 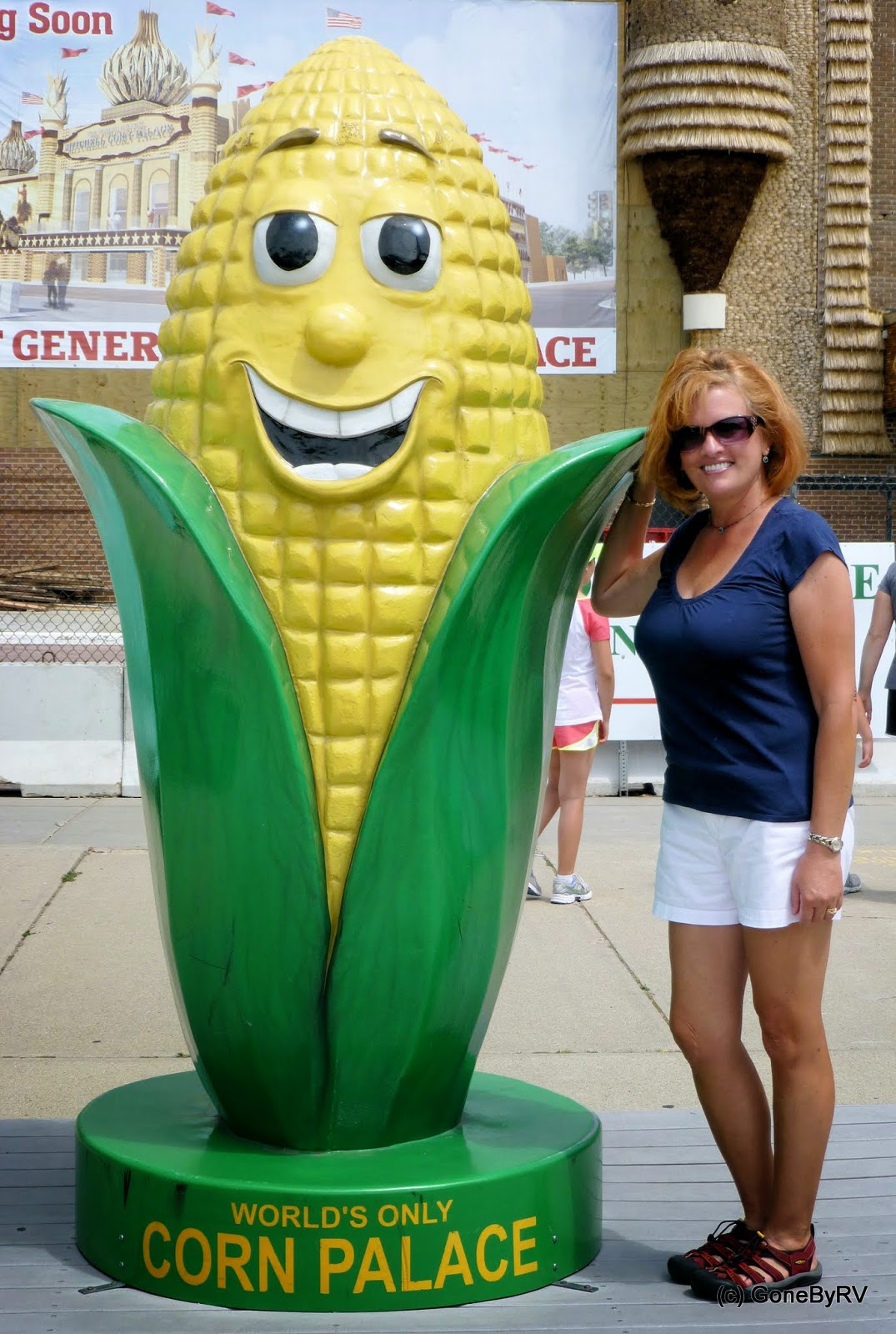 The Corn Palace can be visited in probably an hour, so it's worth the entrance fee (free), even if just traveling through this part of South Dakota. 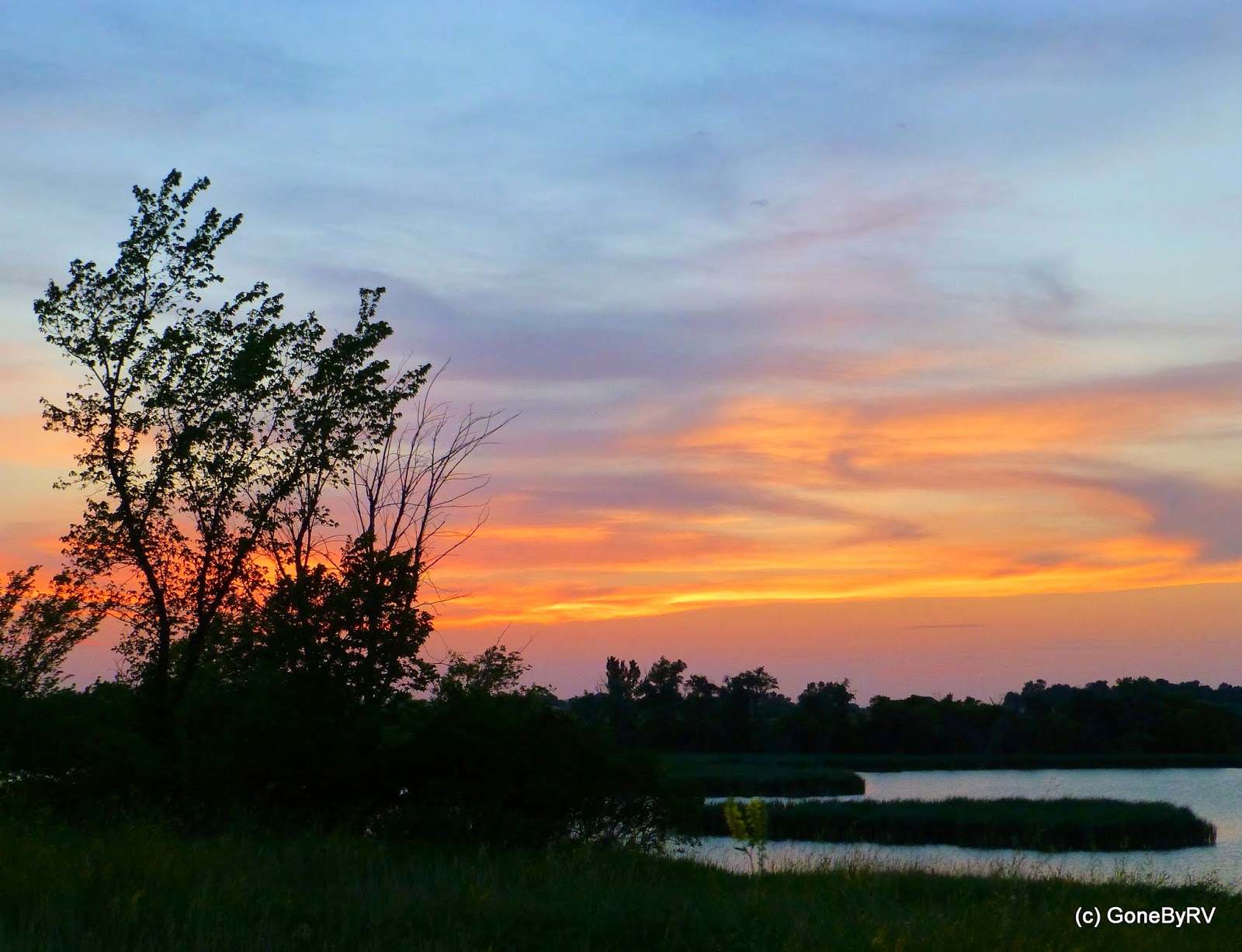 On Friday night we found out from the nice lady at the information center that the town has an annual fireworks display at Lake Mitchell. Since we were new to the area, we found a spot early along the lake. We were in place at 9:00 PM, although the display didn't begin until about 10:15 PM. (Hey, it gets dark late out here).

Here's a small snippet of the fireworks show.  Not bad for a small town display.  I think it lasted a total of 19 minutes, but I've been kind and only embedded about 40 seconds.


Thanks for stopping by to take a look!
Posted by Steve and Karen at 9:02 PM