Another Branson Show, Then Some Natural Scenery (Part 1)

One of the best things about Branson, MO is the variety of things you can do here.  You could fill your days going to the various shows, go to visit natural places of beauty, or simple do nothing if you so choose.

On Saturday we chose to go to another Branson show.  With the name of the show "3 Redneck Tenors" we had a few reservations about what we might see.  The show was a matinee at 2:00 PM, but more importantly, because we saw The Haygoods on Friday night, a special ticket promotion was offered and we saw the "3 Redneck Tenors" for just $5 per ticket.  I thought to myself, how bad could
it be for $5.  We were very pleasantly surprised. The storyline of the show involves 3 "rednecks" who can sing and are from Paris, TX. An unscrupulous manager named "The Colonel" discovers the trio and promotes them thru their rise to stardom.  The first half of the show has our trio dressed in "hillbilly" costume and many, many corny jokes are presented in the act.


After intermission, however, the trio have made it all the way to Broadway and ultimately to Carnegie Hall where they lose their "hokey" costumes (and mullets) and don tuxedos. For pure music enthusiasts the second half of the show is best.  All three of the tenors are actually classically trained and their singing is excellent.  We had a very nice time. 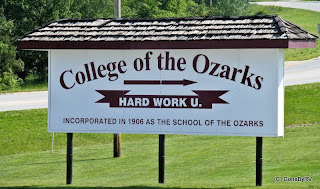 On Sunday we decided it was time to get back to the outdoors again.  Not too far away from the Escapees CG in Hollister, MO is the College of the Ozarks.  This is a bit of a unique school which began as the School of the Ozarks in 1906. The unusual part is that
students can attend virtually tuition-free by committing to work so many hours during the school year and to also agree to work hours during school breaks.  The school prides itself with the slogan of "Hard Work U." The campus was very pretty and it seemed like a very nice area to attend school.  We toured on Sunday and unfortunately most of the buildings were closed, also the student's school year had just ended.

There was a really pretty lake in the middle of the campus with a bunch of ducks, geese, and a white
swan which the kids must feed quite frequently.  When it saw us come near the fence, it made a beeline to us.

﻿
Unfortunately, we had nothing to give it and I think it was none too happy. We learned very quickly to keep our distance from that large extending beak. 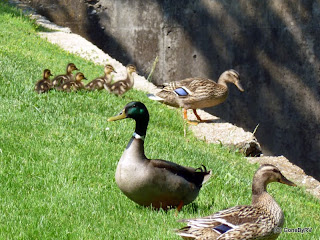 
We also visited Table Rock State Park and the Table Rock Dam after the College, but I've decided to save pictures and descriptions of those areas for tomorrow's blog.

Thank you for taking a look at our blog!
Posted by Steve and Karen at 2:49 AM