Touring Between the Storms

We've had storms which have included rain, heavy rain, wind, strong winds, tornado watches, tornado warnings, and now flood watches and warnings throughout most of the week.  Luckily, our immediate area (about 20 miles north of Topeka) has been spared from most of the severe weather.

﻿﻿﻿ Yesterday we decided it was time to get out and do some exploring.  Since Topeka is the capitol city of Kansas (tell the truth, how many of you actuallly knew that) we decided to take a short drive to the Capitol Building and take a tour of the building itself. Unfortunately, the building has been undergoing a major renovation since 2010 and the exterior will not be completed for about another year.  The interior is almost totally complete, so we took a personal guided tour. (We were literally the only two in the group.)

The first cornerstone of the east wing was laid in 1866 and the the entire building was completed 37 years later in 1903.  The total cost of the construction was $3.2 million. In 2002 a final artwork piece ad astra was fitted to the very top of the exterior dome of the capitol building. The work depicts a Kaw warrior pulling a bow toward the North Star.  The entire height of the building from ground to the very top of the artwork now stretches to 306 feet, or 17 feet higher than the Capitol in Washington, DC. 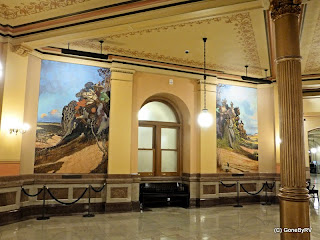 The interior of the building is beautiful.  There's heavy use of marble from many countries on the walls and floors throughout. 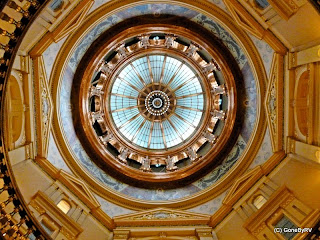 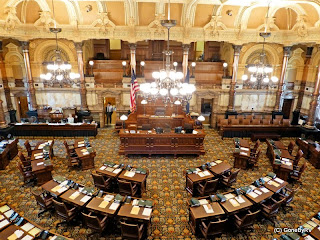 The Senate portion of the Capitol (the East Wing) was preserved to reflect a more original look of the early years. The chandeliers were originally all gas lit and lowered and raised by pulleys for cleaning and repairs. 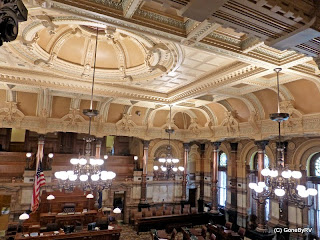 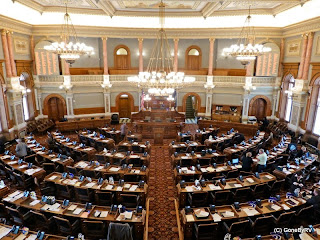 The House of Representatives side is located in the West Wing and is larger (more delegates) and a bit more modern looking. 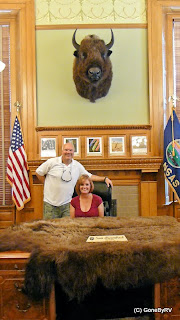 The Governor of Kansas was unavailable for our "drop in" visit, but we were able to have a picture of us taken by our tour guide at the Governor's "public" desk.  The Bison skin on the desk was a gift from one of the local American Indian tribes to the Governor. 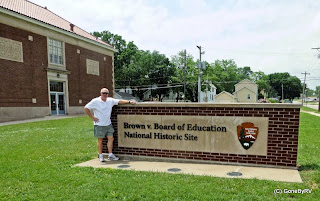 After the Capitol Building tour we traveled a few blocks south to a National Historical Site administered by the National Park Service named "Brown vs. Board of Education."
According to wikipedia.com "In 1951, a class action suit was filed against the Board of Education of the City of Topeka, Kansas in the United States District Court for the District of Kansas. The plaintiffs were thirteen Topeka parents on behalf of their twenty children.
The suit called for the school district to reverse its policy of racial segregation. Separate elementary schools were operated by the Topeka Board of Education under an 1879 Kansas law, which permitted (but did not require) districts to maintain separate elementary school facilities for black and white students in twelve communities with populations over 15,000."
The larger impact of this occurred in 1954 when the US Supreme Court voted 9-0 in which the Court declared state laws establishing separate public schools for black and white students unconstitutional. 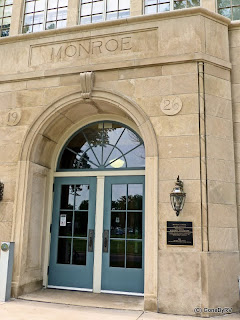 discriminated against throughout the years via the use of film, displays, photographs, and other physical displays.