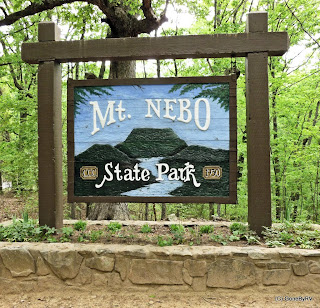 Yesterday we took a trip over to Mt. Nebo State Park.  It's only about 30 minutes from the Lake Dardanelle State Park and was very enjoyable, although a clearer sky would have made for better pictures.

During the 1890s, a resort hotel was built to house
steamboat passengers on the Arkansas River.

In 1927, Mt. Nebo was designated as a state park. The
majority of the trails, cabins, bridges and pavilions at the park
were built by the Civilian Conservation Corps." 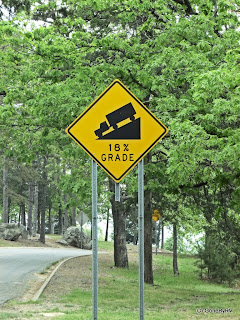 We were fortunate in two areas while ascending and descending the mountain.  First, traffic was very light and second, we were driving the Honda Fit and not the MH!  Actually, signs at the bottom of the mountain warn against attempting to pull any trailer longer than 24 feet up the mountain.  I'm a believer.

The Visitor Center was a valuable asset for information on the Park and the surrounding areas, and a nice place to stop for an ice cream.

The park is oriented so that there are points east and west
appropriately named Sunrise and Sunset Points.

Here's Karen taking a look off of Sunset Point. 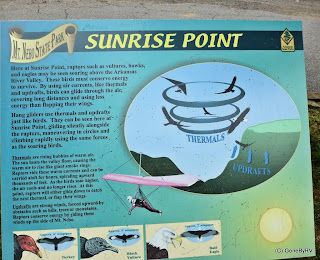 Mt. Nebo is one of only two parks in the state which allows hang gliding.  We traveled to Sunrise Point to view the area where most of the hang gliders begin their ascents off the cliffs and eventually end up in the valley below.

I thought that hang gliding might be something I'd
like to try someday. That is, until I took a look over the edge.  I think I'll stick to RVing.

Thanks for stopping by to take a look!
Posted by Steve and Karen at 11:11 PM