It's Blog "Catch Up" Monday

From The Amana Colonies, IA    (Click on Pics to Enlarge)

It's been a busy past few days and I've really neglected the blog.  I'll try and be merciful in the length and depth of today's "catch up" blog.  Hopefully, some of the discussion will whet your appetite and give folks more of a desire to come and explore this area.

After arriving in the Amana Colonies area last Wednesday and taking a day off to just rest, I (meaning Steve) did what I like to do.  That was, look and see if I could find a minor league baseball team in this area.  I did and we traveled 16 miles north to Cedar Rapids, Iowa to watch the Cedar Rapids Kernels (Single A) play the Burlington Bees.  We managed to jinx another team and the Kernels lost 6-5. 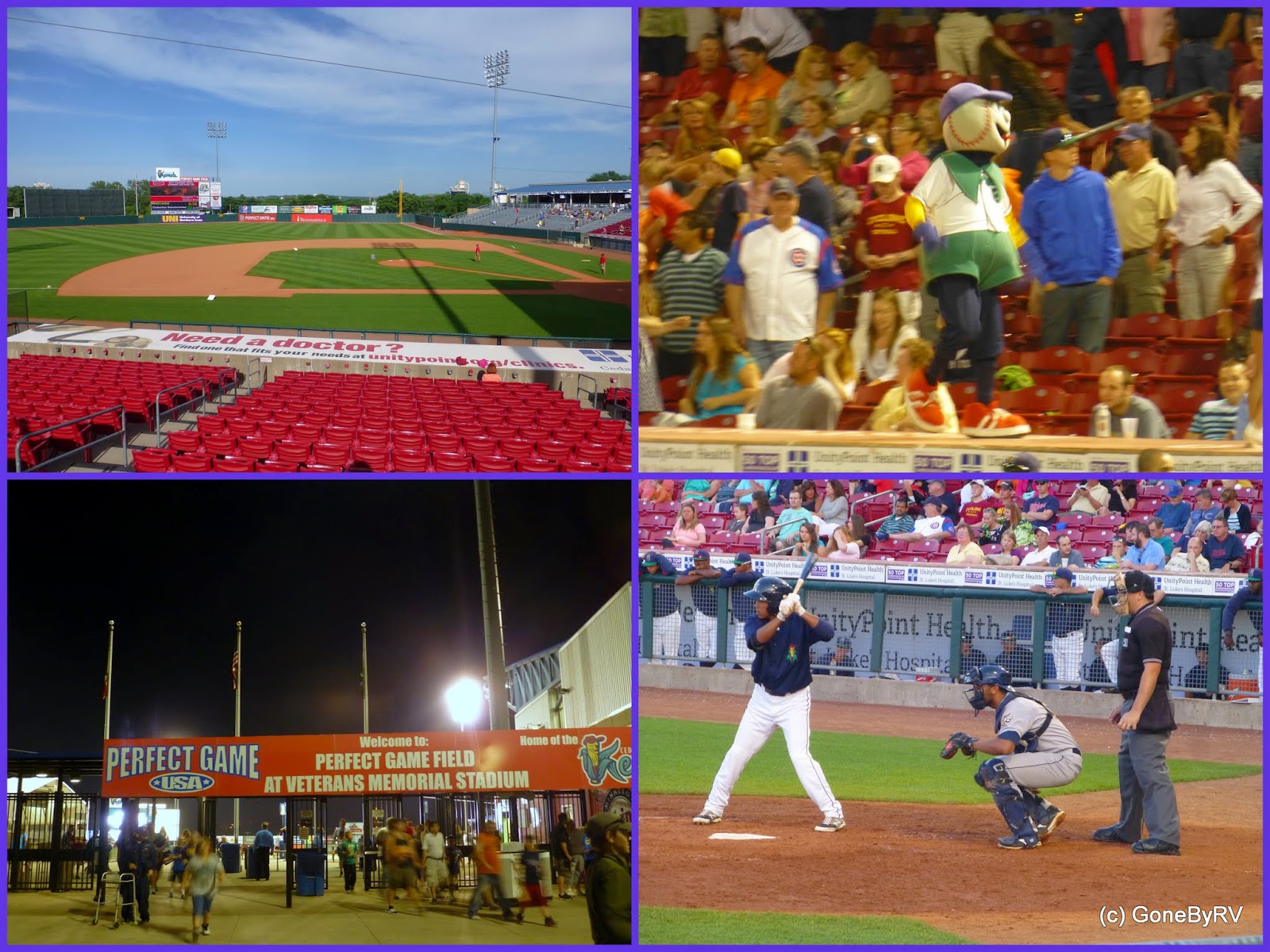 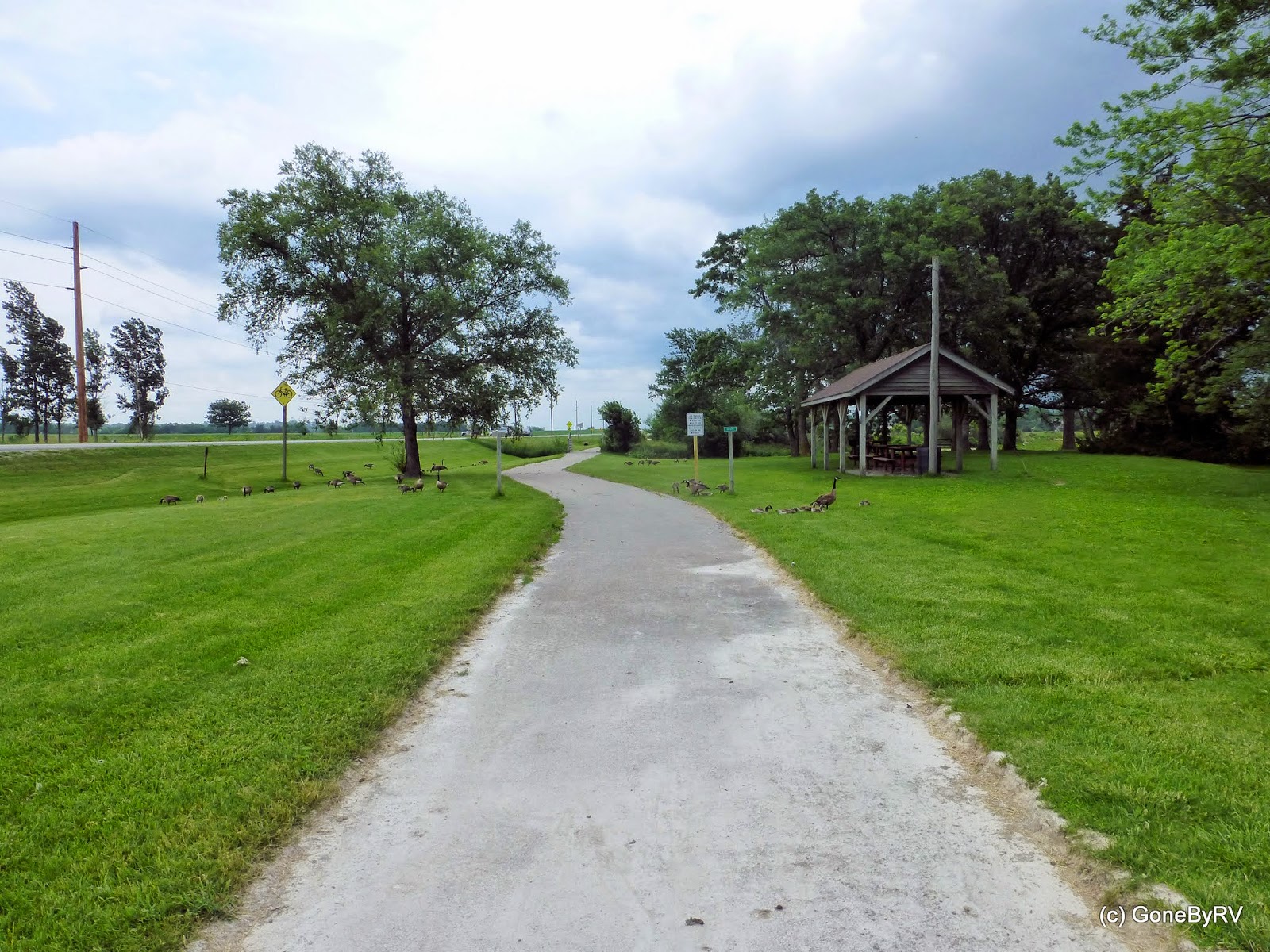 On Thursday we did a bit of internet research and found that the area has a multi-use recreation trail named the Koloniewig Recreation Trail.  We decided to check out the trail on-foot to see how it might be for bicycle riding.

The trail looked very promising, so we decided to check geocaching.com and perhaps get some exercise and do some geocaching at the same time.
Here's a map of caches in the immediate area of the trail (with smiley faces to indicate the ones we found). 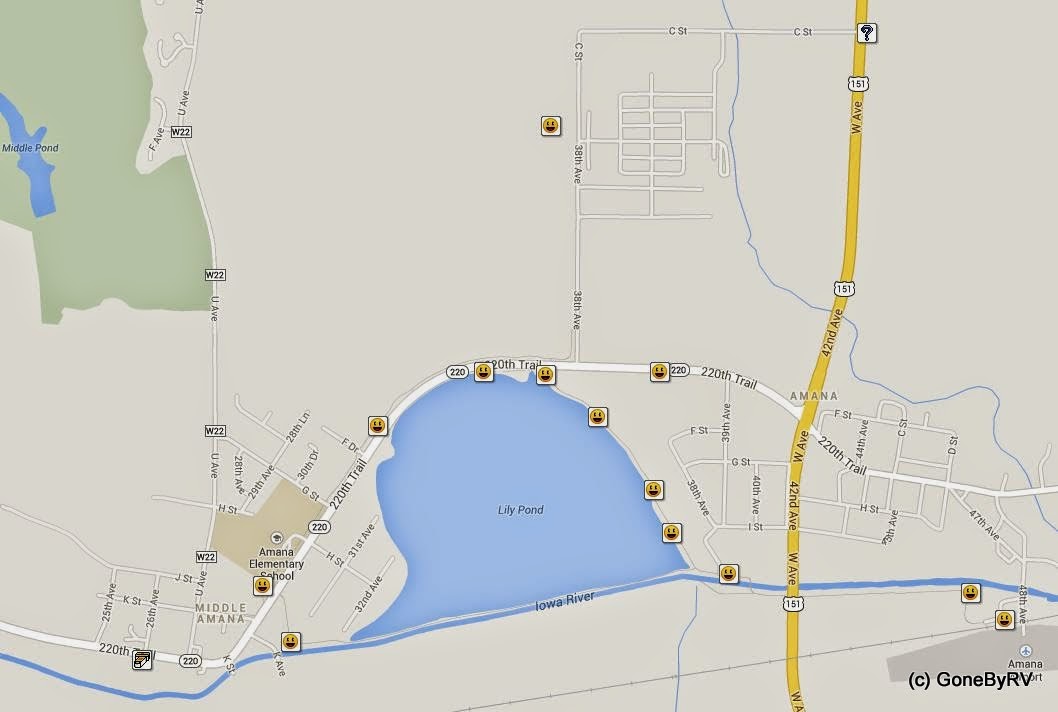 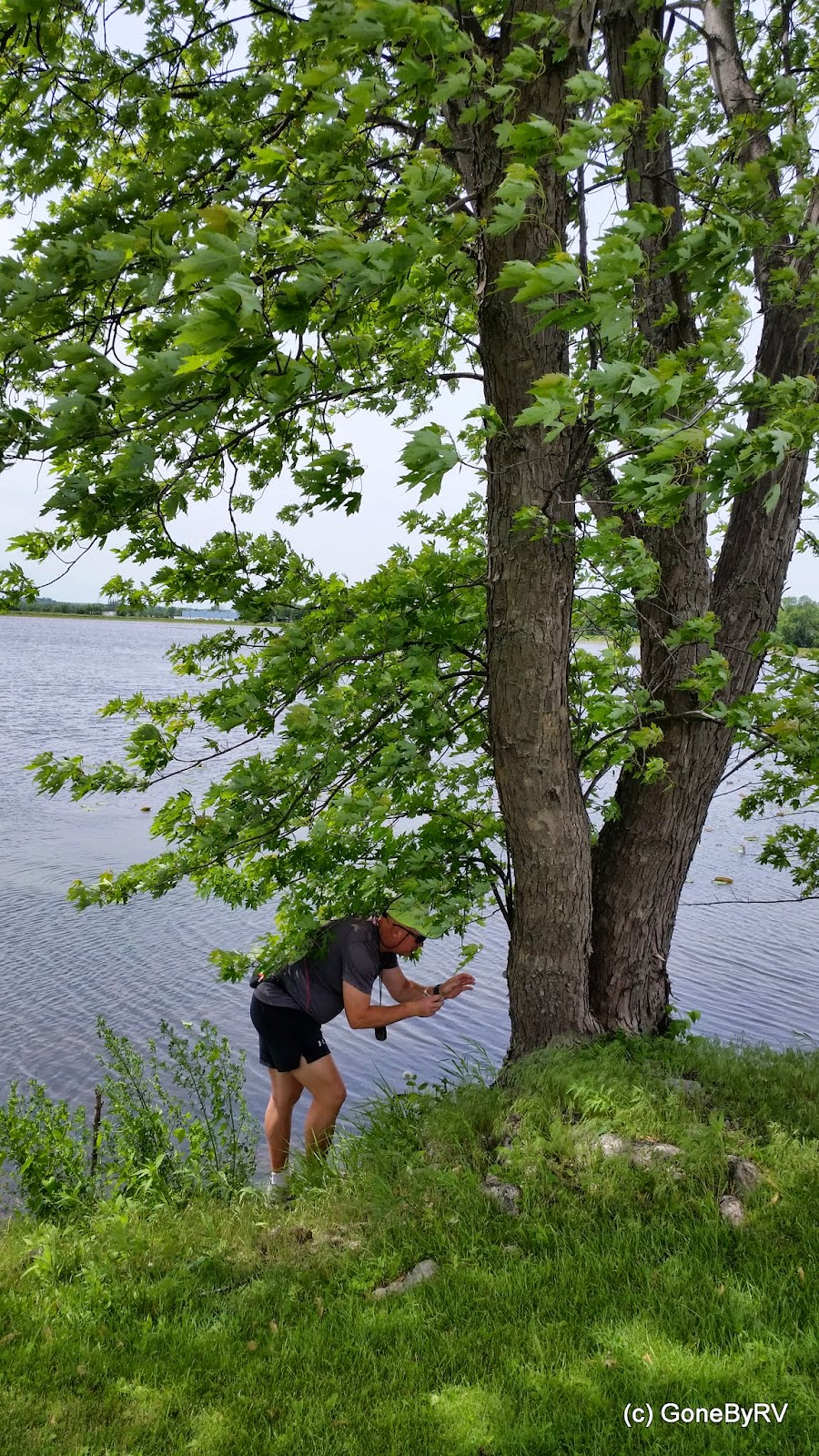 Here's an easy one near Lily Pond Lake. Here I take a break along the geocaching trail and decide to make friends with the local livestock.

All playing aside, the main reason we came to this area was to visit the Amana Colonies.  I am not going to go into detail here about the formation of the colonies, but you might take a look at the abbreviated version of the History of the Amana Colonies on their website. I will sadly admit that I knew nothing about this group and their communal way of life prior to coming to this area.  In the past couple of days, however, we have learned a tremendous amount of knowledge after touring and listening to many speakers.  Basically, the Amana Colonies consist of 7 villages which can be easily reached via automobile in a short period of time.  The red line on the map below indicates a route to reach all of the communities. 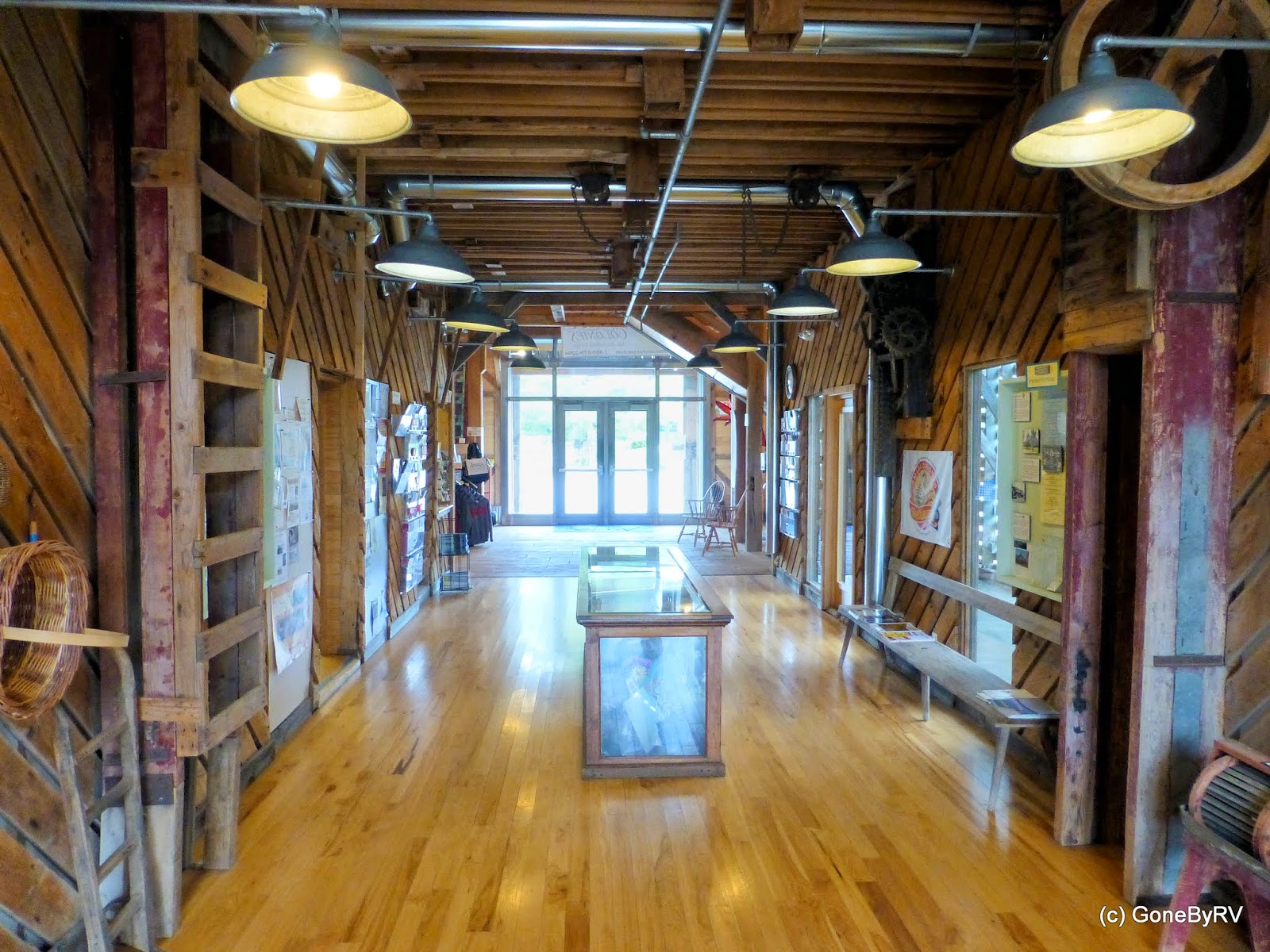 Should you decide to visit, I would recommend a first stop at the Visitor's Center located in Amana.  The center is housed in an old corn storage building.  The woman working the desk was very helpful for us to get a handle, so to speak, on how we should tour the area. 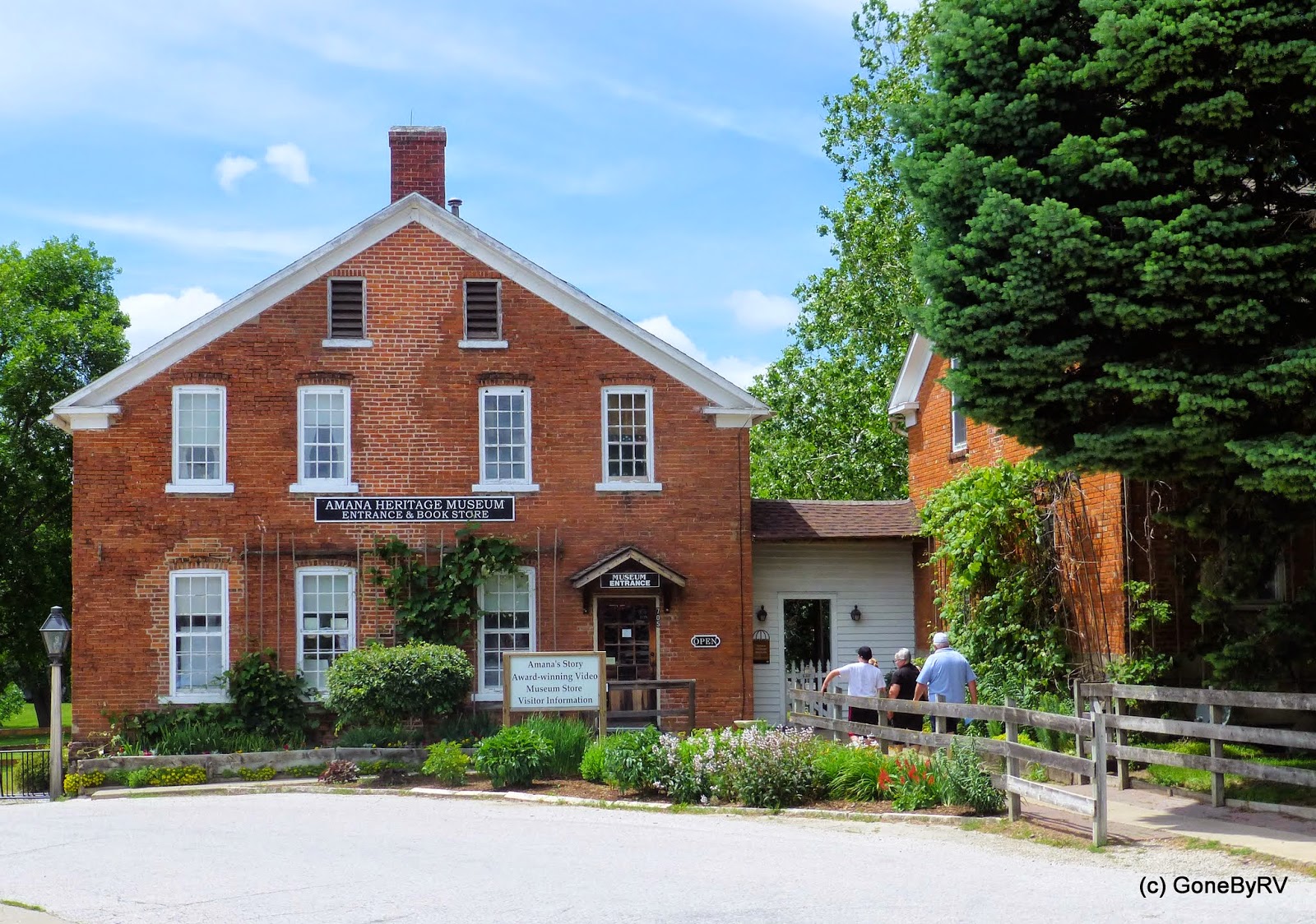 The next stop should be the Amana Heritage Museum, located just a short few blocks from the Visitor's Center.  We attended a panel disussion on Sunday afternoon at the Museum on the 300-year religious history of the people of the Amana Colonies, but I wish that we had toured the Museum first to give us a better understanding of their history. 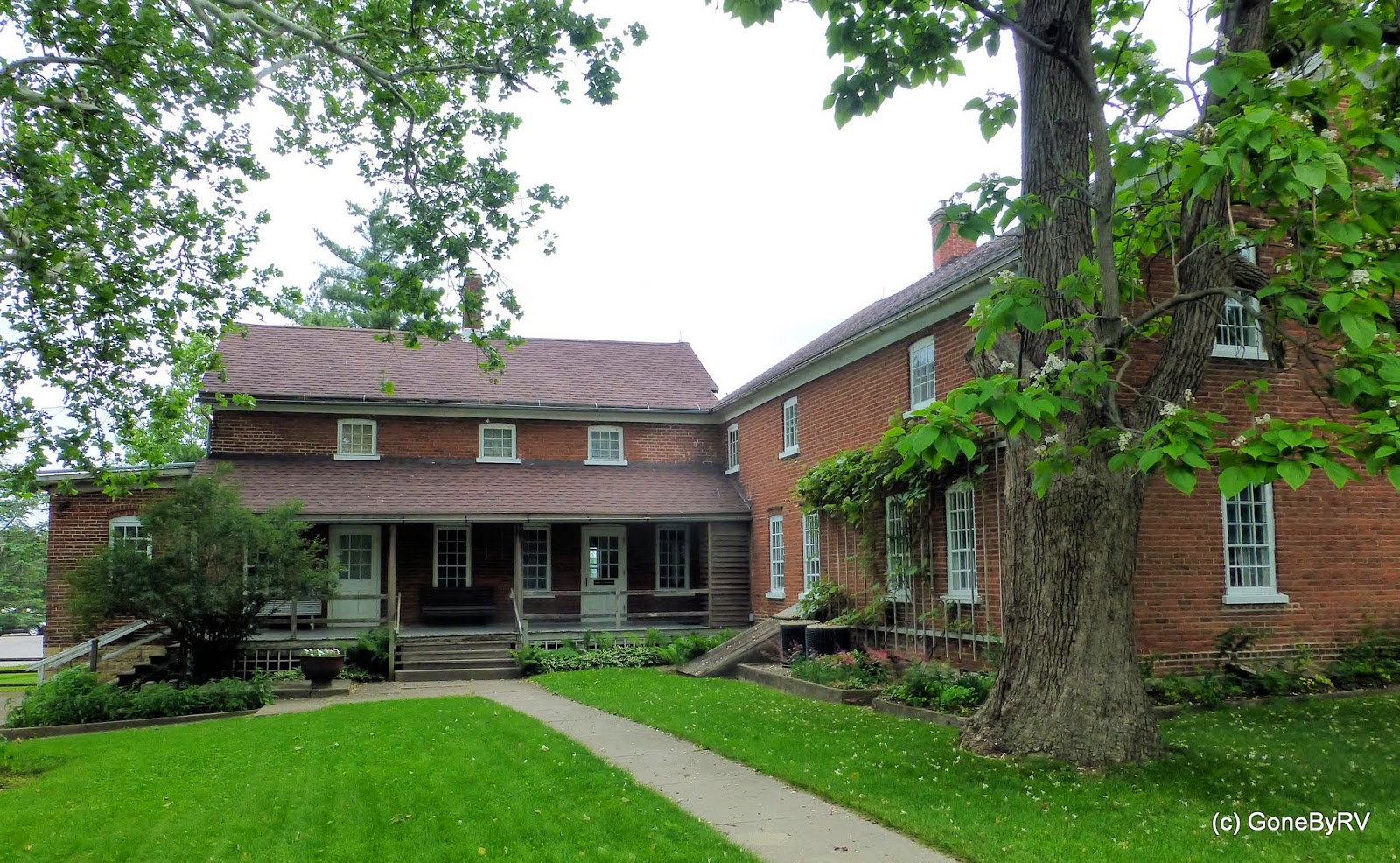 Part of the Museum is housed in a building which most recently was the residence of Dr. Noe.

The Museum depicts stories and exhibits from the early years of the Amana Colony (1855 in Iowa) until recent times.  For some reason, I never connected Amana appliances with this area of Iowa. But after The Great Change (1932), in which the people of the colonies voted to change their lifestyle from a communal to a capitalistic society, the Amana factory (now owned by Whirlpool Corporation) played an important role in the economic welfare of the community. 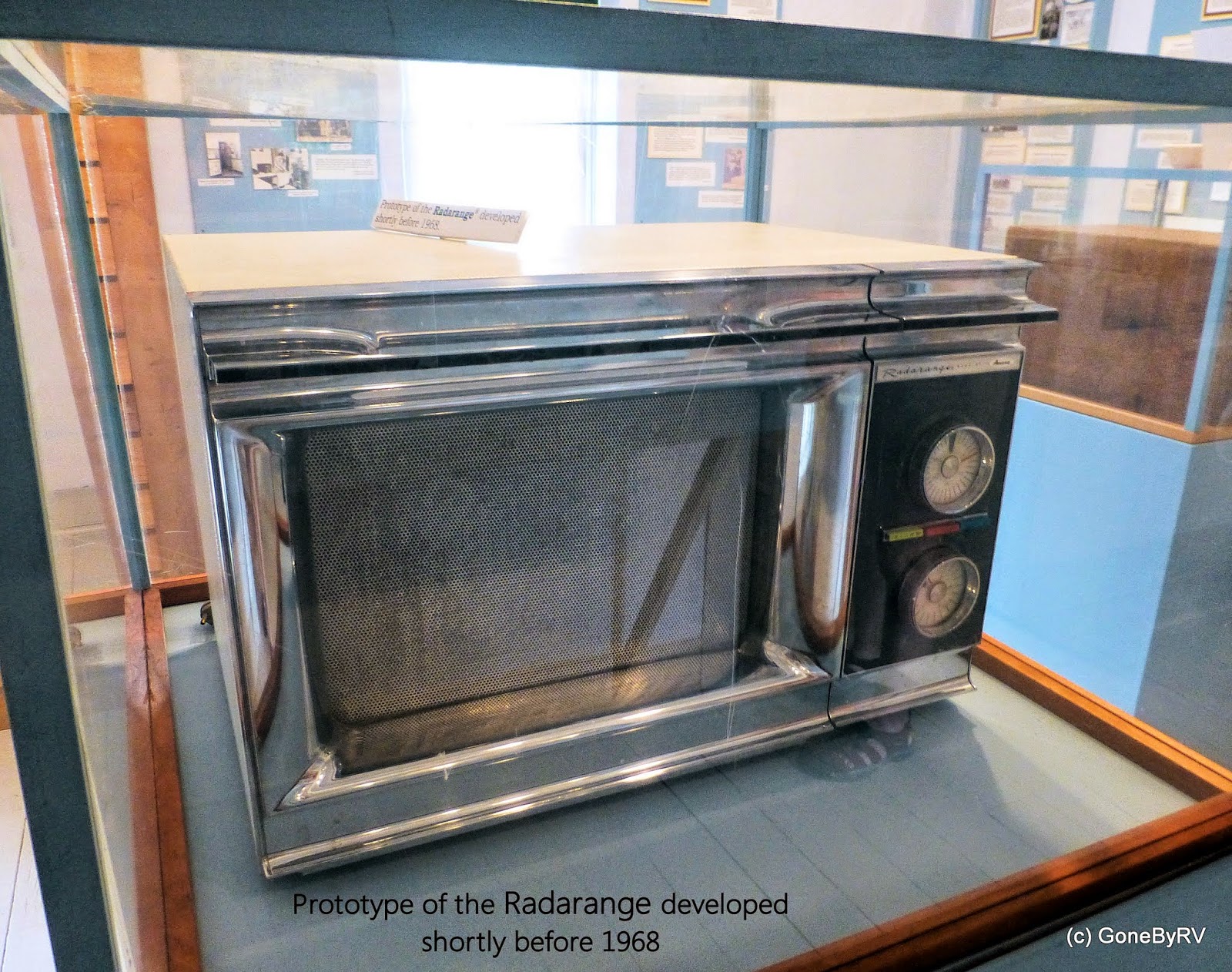 Here's a prototype of the Amana Radarange developed just before 1968. 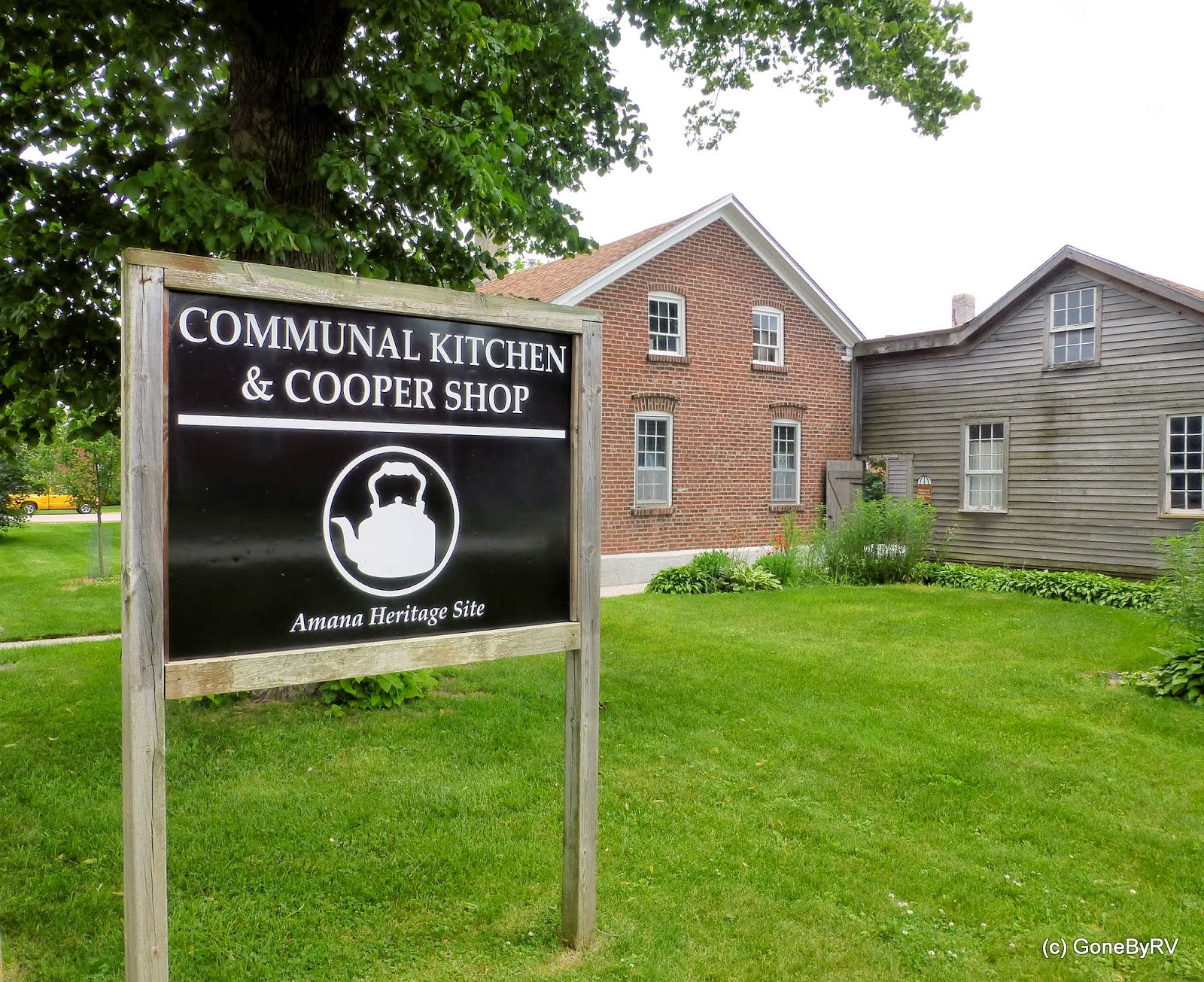 A short drive to Middle Amana led us to visit one of the very important aspects of communal living. This was the communal kitchen. 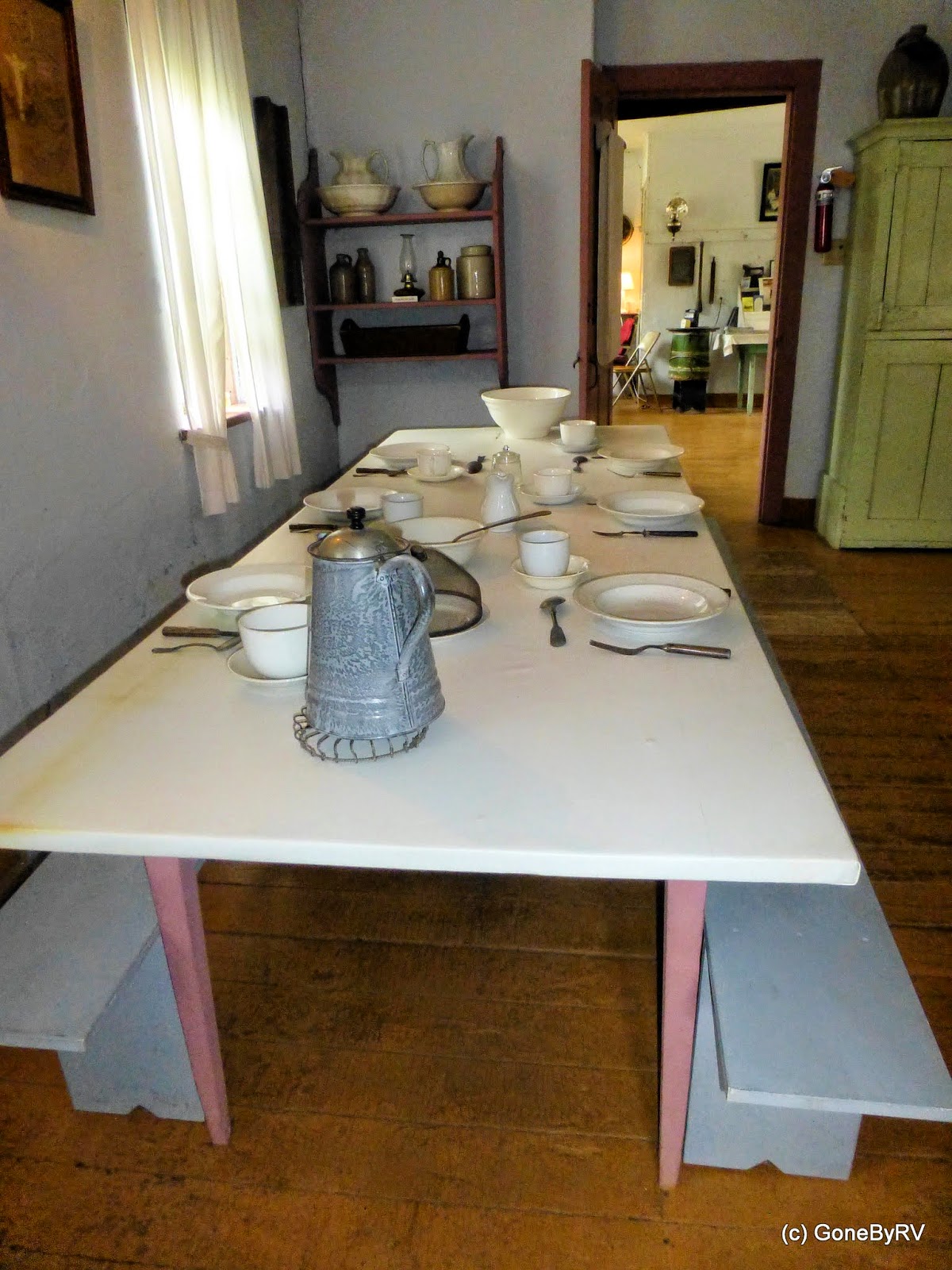 The docent inside (who has lived in this area for years) was a wealth of information.  She described how the communal kitchens were responsible for feeding everyone in the colonies. This building, as are all of the buildings we toured, are original and the articles inside are were originals. 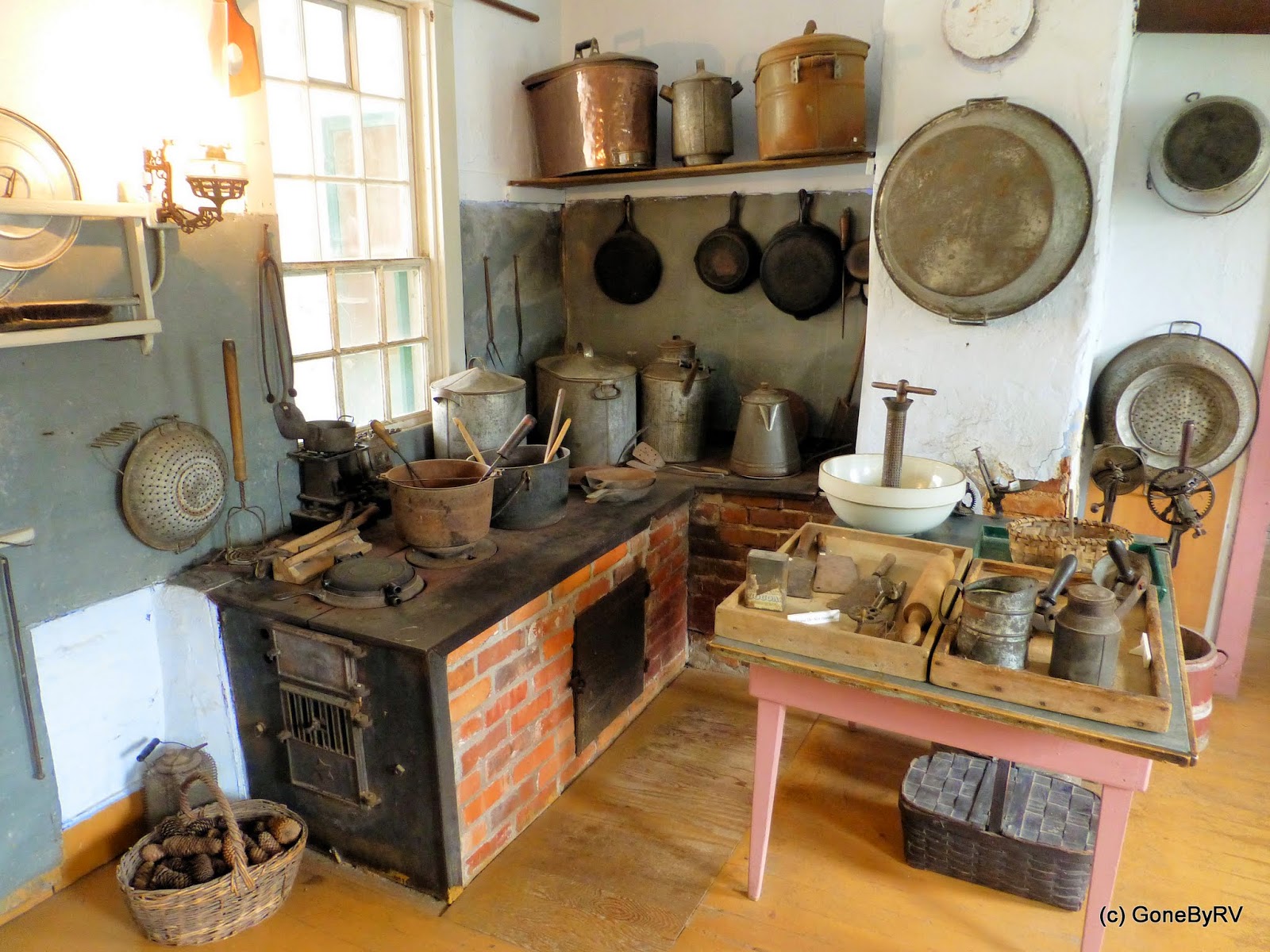 Here's a picture of the cooking area. 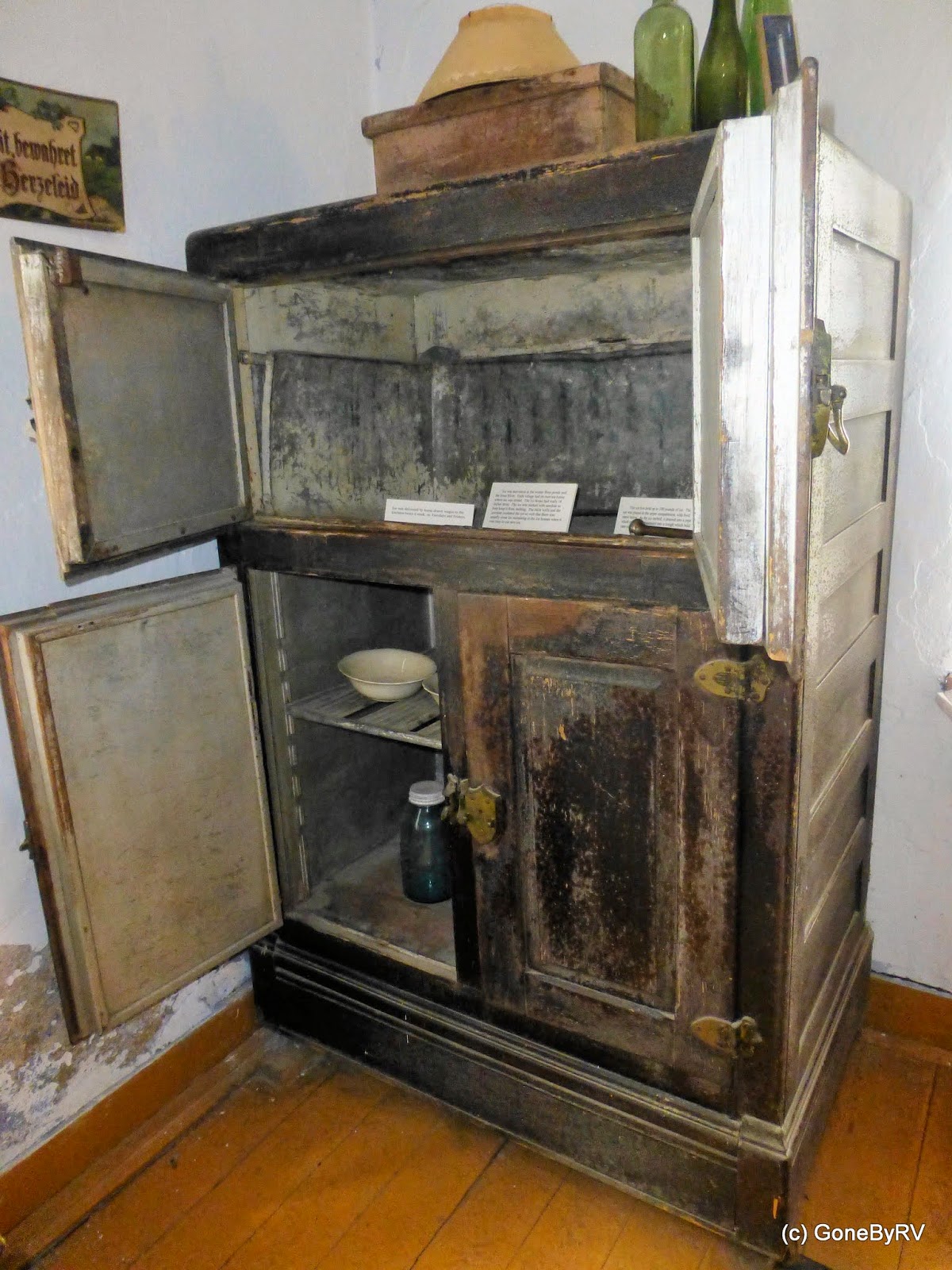 Here's an area we really wanted to visit, but found that it was closed on Sunday and Mondays.  A sign on the door indicates that when the baked goods are sold out, the bakery is closed for the day. 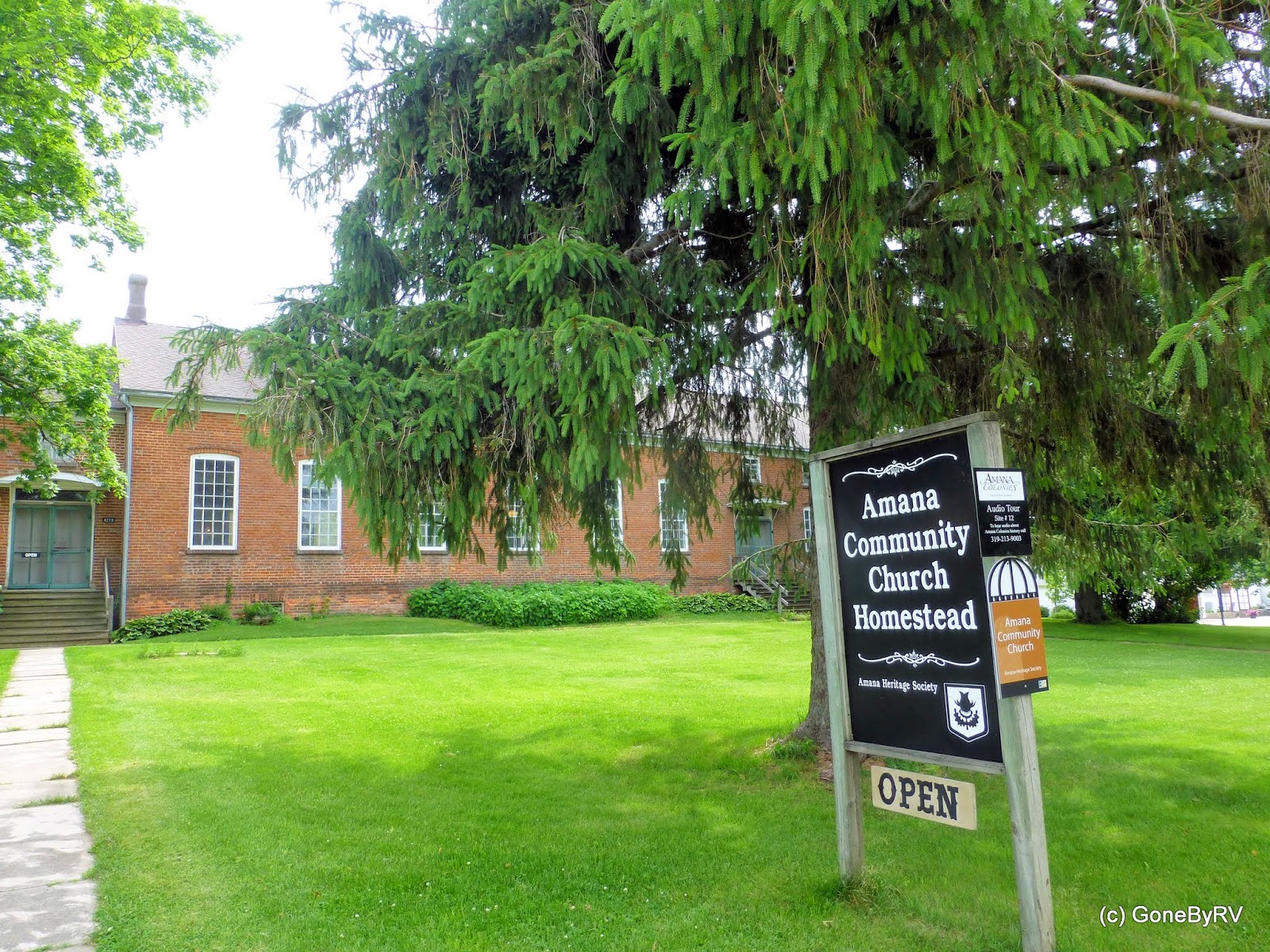 Another very interesting area we visited was the Amana Community Church in Homestead.  Several things struck us as being different from other churches before we even entered.  Notice the lack of any steeple or crosses. 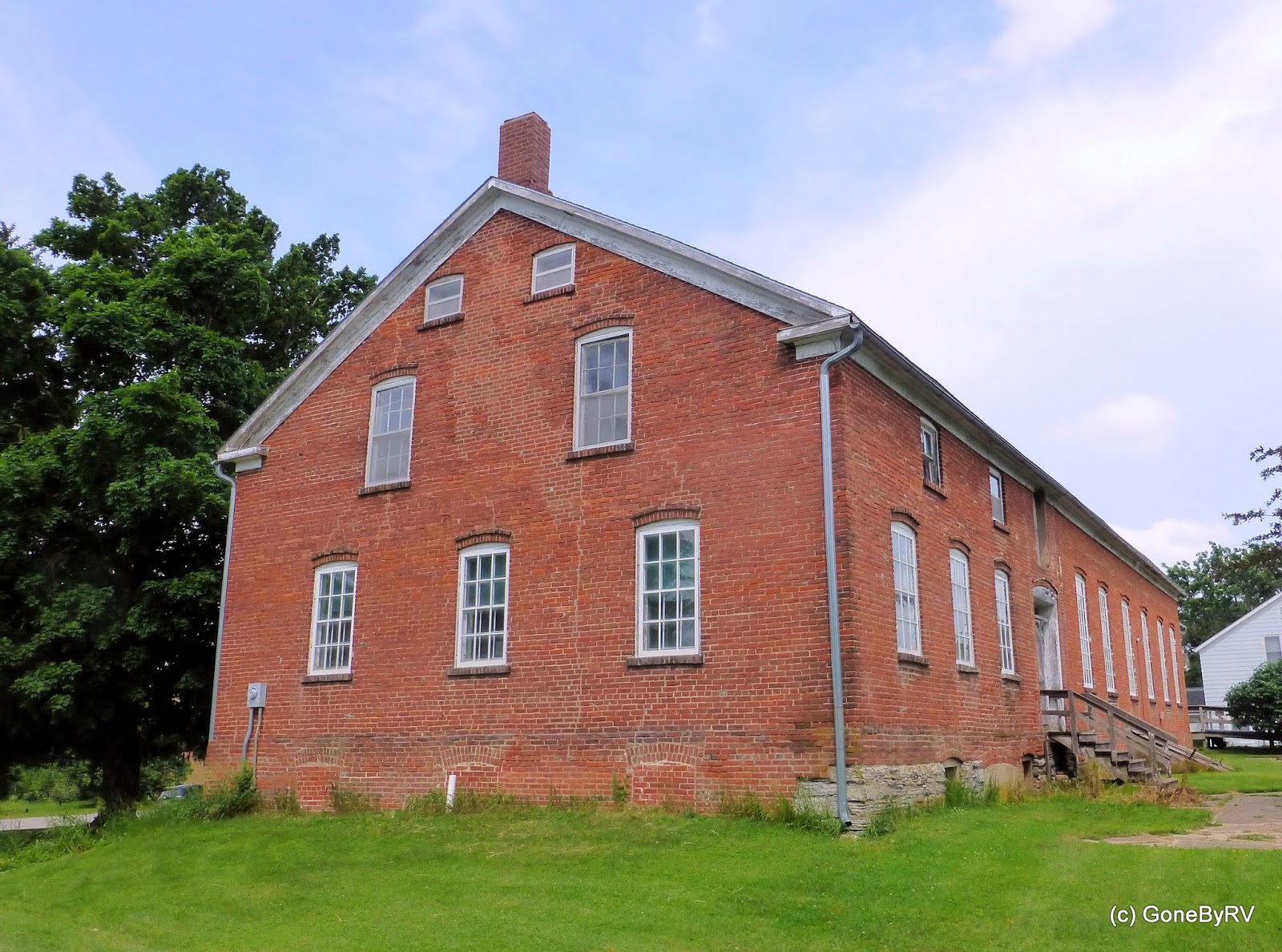 Here's a picture from the back side of the church. Doesn't it remind you more of a meeting house than a church? 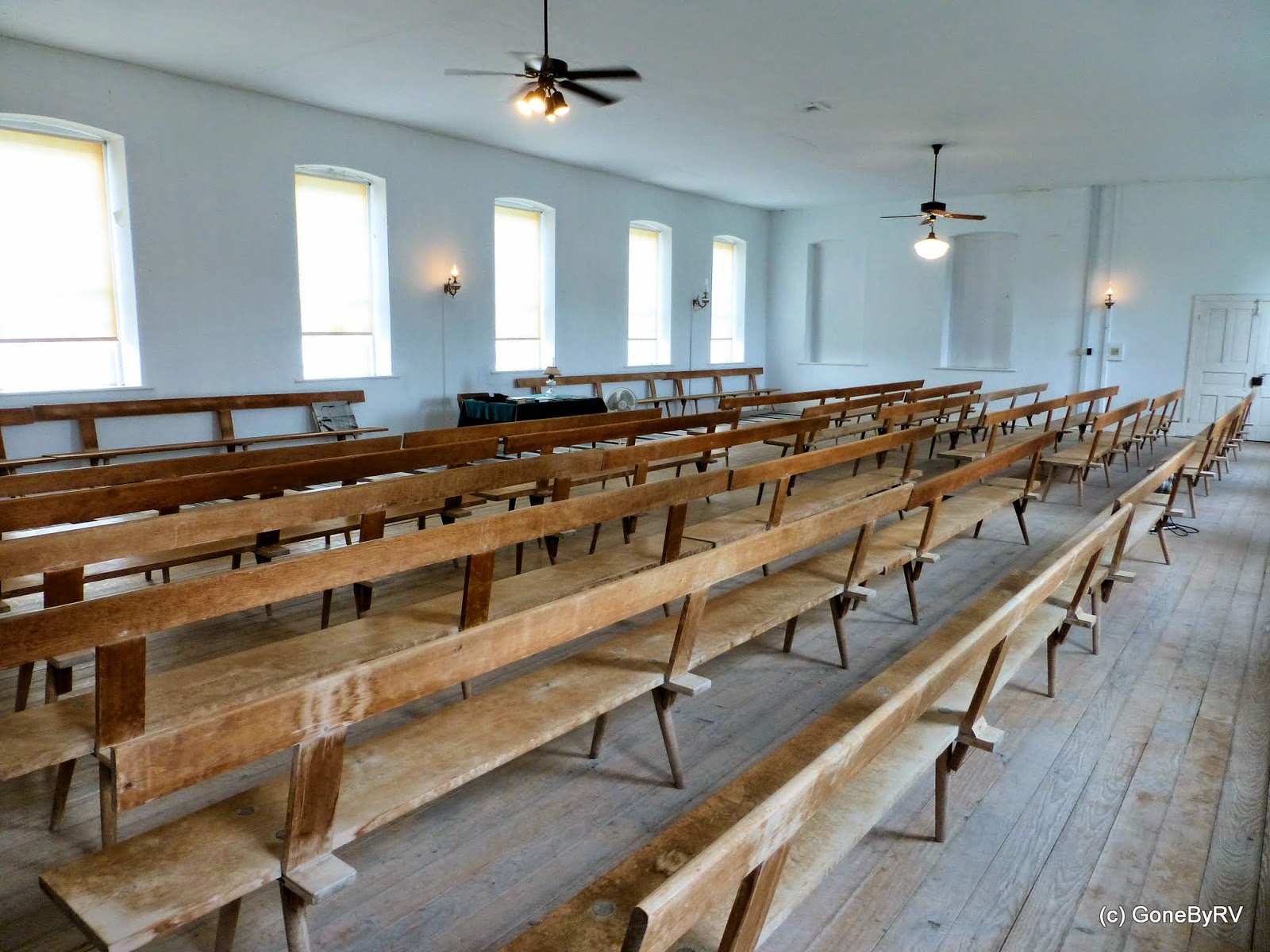 Once inside, the docent explained that the religious beliefs of the community dictated against having the extravagant buildings (cathedrals) and expensive decorations of the religious places of worship in Europe. You'll notice no religious symbolism at all inside the church.

There was no lack of worship services, however. Prior to 1932, the community members were required to attend service 11 times during the week. I found it interesting, however, that no ordained members led the services.  The religious meetings were led by the "Elders" of the community.

I've purposefully given you just enough, hopefully, that you will want to visit this area and learn more about the peoples of the Amana Colonies.  To me, this is one of the reasons we fulltime and travel to places we know little about.  I also have many more pictures not included in this blog posted in my Google+ albums for viewing.