Finishing Our Stay in the Taos Area

Posted from Santa Fe, NM
(Click on Pics to Enlarge)

As always, to view additional pictures not included in this blog, click below:


On August 14 we decided to drive the scenic loop in the area known as The Enchanted Circle. This is an 84-mile drive through some very pretty parts of northern New Mexico.

From Questa, it's approximately 12 miles to Red River across the mountains. Once on the eastern side of the mountains, the valley encompassing Red River, Eagle Nest, and Angel Fire is mostly flat and an easy drive. We received a recommendation from our friend Kathy B. to visit the Vietnam Veterans National Memorial State Park just outside of Angel Fire.

From the above website:
"Following the death of their son, U.S. Marine Corps First Lieutenant Victor David Westphall III, Jeanne and Dr. Victor Westphall began construction of the Vietnam Veterans Peace and Brotherhood Chapel to honor the memory of their son and the fifteen men that died with him near Con Thien, South Vietnam on May 22, 1968."

The memorial is unique in that it is the only state park dedicated exclusively to the memory of Vietnam Veterans. 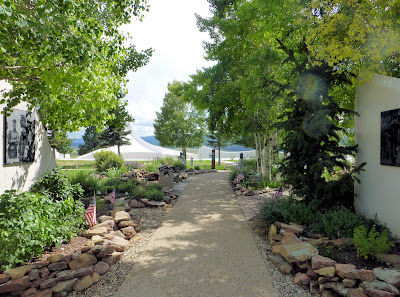 This is the first view walking in through the gates from the upper parking area. 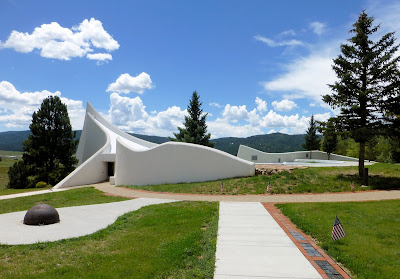 The Chapel is beautiful and simple in design, but the reverence felt inside (even with no one else around) was chilling. 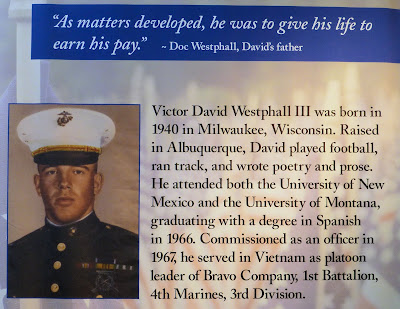 As you enter the Visitor's Center of the Memorial,  a display detailing Dr. Westphall's son David as the inspiration for the building is shown.

There were many exhibit rooms showing the daily lives of the Vietnam soldier. There is also the ability to search by name (and many include pictures) of those lost in Vietnam.


In my opinion, this is something not to be missed if in this part of New Mexico. 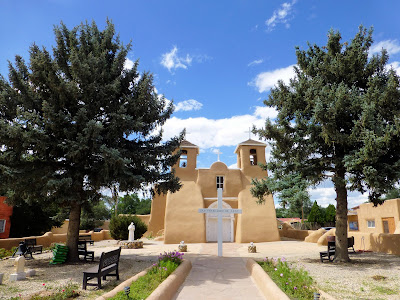 On August 17, we headed down to just south of Taos to visit the San Francisco de Asis Mission Church. This church is located in Ranchos de Taos. The church was constructed between 1772 and 1816. It looks in pretty good shape for a church that old, doesn't it? 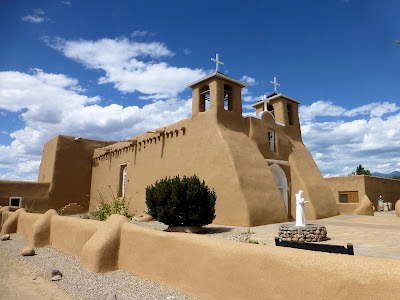 The reason that it looks so good is that each June, parishioners, visitors, and citizens of Ranchos de Taos come together for a 2-week period to completely "re-plaster" the exterior walls. 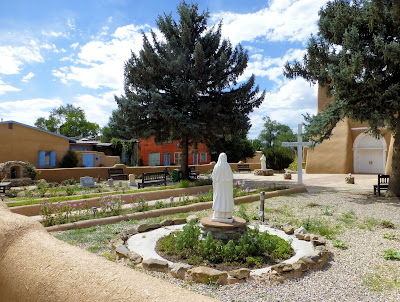 Here's a closer view of the front courtyard area. Although visitor's are allowed inside, no photos are allowed. (You can take a look at the link beside the previous picture to see at least what it looks like.)


After a grueling day of sightseeing, it was time to look for a place to have dinner in Taos. Based upon the recommendations in TripAdvisor.com we decided to try La Cueva Cafe for a taste of the local fare. Although the outside isn't much to look at, the food was very good. 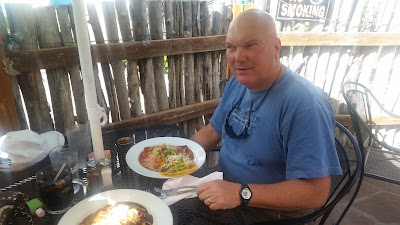 We had a chance to get our first taste of  "New Mexican" style cuisine and I would certainly go back again.  The prices are fair and the service was reasonably quick. 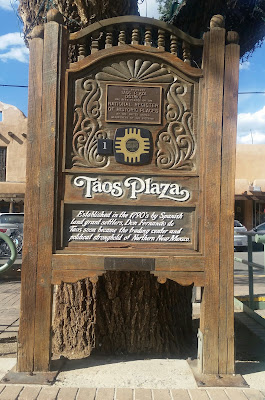 After dinner we walked a couple of blocks to Taos Plaza to enjoy an evening of music.  Taos has a series of free concerts in the summertime for everyone to enjoy. 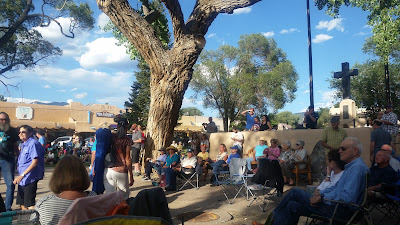 Tonight's group was named Katie P and the Business.  They played a style of "rock-funk" (if that's possible). They were actually pretty good and the crowd enjoyed it. This was a gathering of the crowd prior to the music. 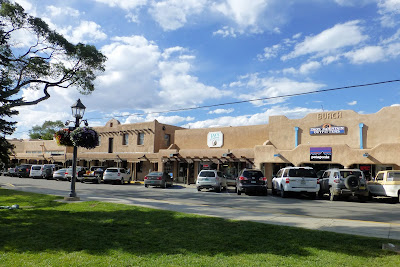 The Taos Plaza is much smaller than Santa Fe Plaza (where we are now), but the shops were nice and the folks friendly. You get a very "artsy" feel here.

Our time in Questa, NM is up. We stayed there from August 8-22. For such a small place, we definitely found enough things to do to occupy our time. As I said in an earlier blog, however, you'll probably need to travel about 20 miles to Taos to do an major grocery shopping. Next blog-on to Santa Fe!