Posted from Santa Fe, NM
(Click on Pics to Enlarge)


We finished our time in Colorado (for this season) and began our trip south into New Mexico.  On August 8th we pulled into Sierra Hermosa Campground in Questa, NM for the next two weeks. Where is Questa, NM you might ask? We didn't really know either, but we knew that we wanted to visit Taos during this stay and do some hiking in the nearby mountains.

Questa, NM is a very small town located approximately 20 miles north of Taos along RT522. The estimated population in 2016 was only 1754. The elevation is approximately 7500 feet. There is only 1 traffic light in the entire town and only 1 "real" grocery store. All of our shopping was done in Taos when we made visits there for other adventures. Questa is located along The Enchanted Circle, a scenic route which includes Taos, Red River, Eagle Nest, Angel Fire, and the Taos Ski Valley.

Because we hiked on several different days and on many different trails, I've decided to just address our hikes in this blog. The visit to Taos and other travels while in this area will be detailed in another blog posting. 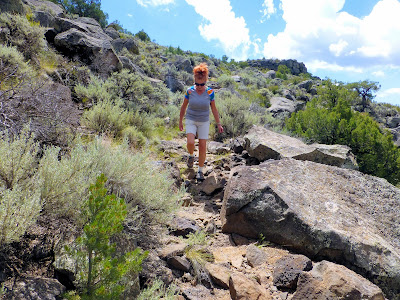 The Rio Grande del Norte National Monument area is only a couple of miles north of Questa. This seemed like the logical place to begin hiking. On 8/9 we hiked both the Chiflo and the Big Arsenic Trails in this area. The Chiflo Trail is very short (about 1/2 mile OW), but fairly steep. We were the only ones around for the entire hike. 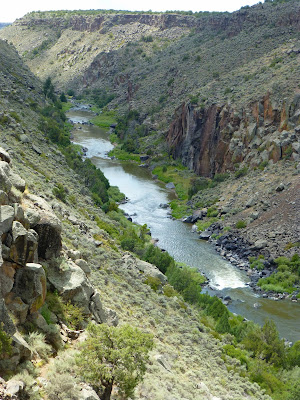 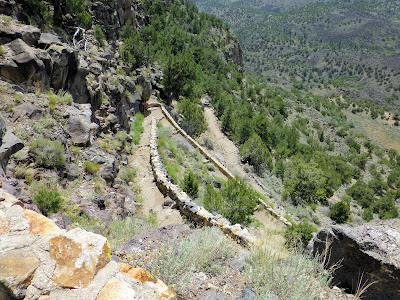 The second hike of the day (also in The Rio Grande del Norte National Monument area) was called Big Arsenic Trail. Although this trail is described as "moderate" in the park literature, the 680 feet drop in about 1 mile sure seemed tougher. The beginning part of the trail seemed innocent enough, however. 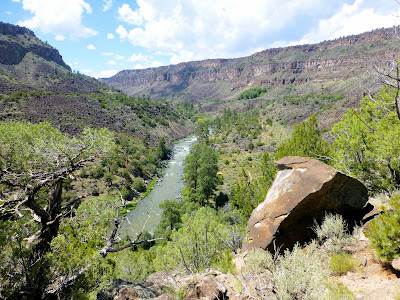 The trail heads into the gorge and eventually connects with other trails near the Rio Grande River. 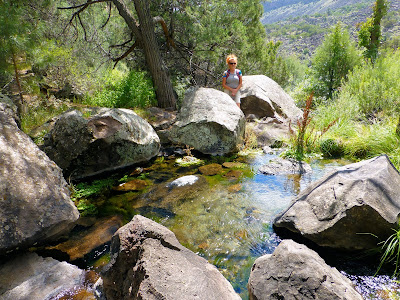 Near the river, a cold water spring flows from the rocks and finds its' way into the river. 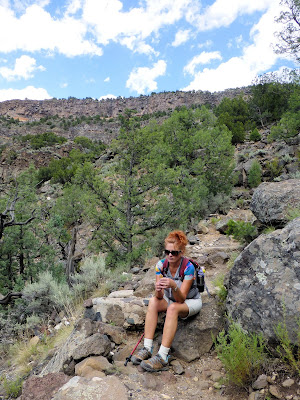 For some reason, we had forgotten that when a trail leads totally down hill in the first half of the hike, the second half will be all uphill. We took many more breaks on the way back to the rim. 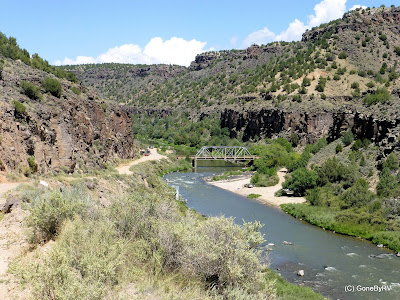 While looking thru literature for this area, we came across a feature known as Black Rock Hot Springs. On 8/12 we decided to take a look. After a few miles of traveling on dirt and gravels road we came to the John Dunn Bridge. This bridge crosses the Rio Grande River just north of the Black Rock Hot Springs. 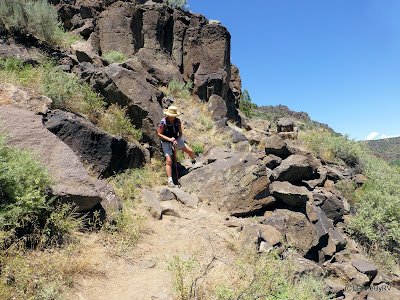 A short hike down a rocky trail leads to the springs, located right beside the river. 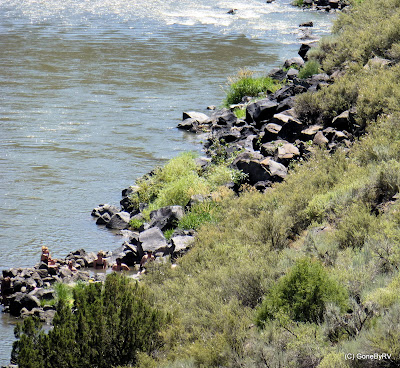 It might be a bit hard to see in the picture, but the two hot spring pools are located in the left side. The water temperatures are usually around 97 degrees, depending upon the height and flow of the river. We understand that this spot is very popular, and that clothing is optional.


It was a beautiful Saturday, but we decided to keep our clothes on and push on to our next destination. 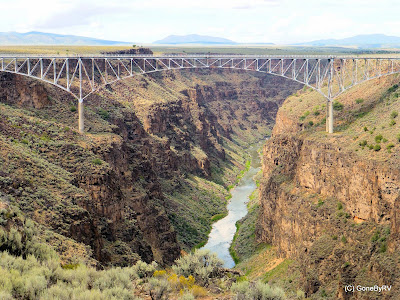 Just a few miles south toward Taos, turn west on US64 and you will cross a 2-lane steel bridge known as the Rio Grande Gorge Bridge, or the "High Bridge". The bridge was dedicated in 1965. It stands 565 feet above the Rio Grande River and the span is 1280 feet in length. This bridge is the 7th highest bridge in the United States and the 82nd highest bridge in the world. 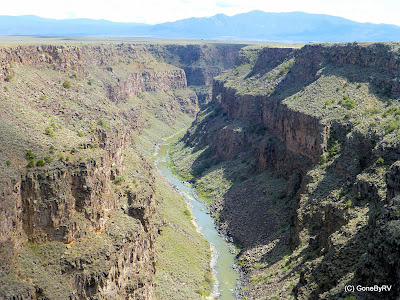 Beautiful views, both north and south, of the gorge and Rio Grande River below are possible by walking onto the bridge. 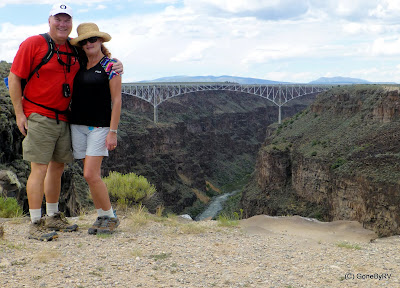 A better way to view the gorge and river below is by taking the West Rim Trail. This trail probably runs south for at least 9 miles toward Taos, but we only hiked about 4 miles roundtrip. 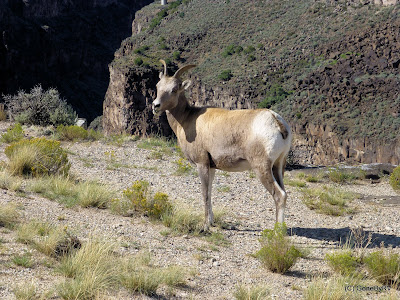 The trail is flat and easy for almost anyone, but could be hot during high temperature parts of the year. As always, bring water. You never know what you might run across when hiking.  This one seemed pretty comfortable with visitors around. 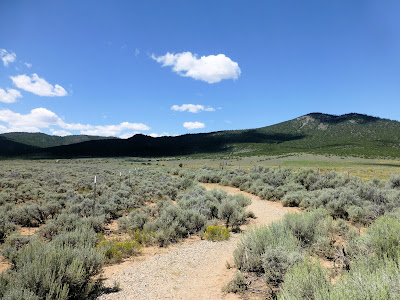 The last hike I'll discuss in this post is named Las Vistas de Questa Trail. We made this hike on 8/16. Again, we saw no one else on the trail. This trailhead begins only a couple of miles north of Questa, right off of RT522.

The "draw" of this trail is that you ascend to two observation points atop one of the peaks in the center of  this picture and you then are greeted with beautiful views of the valley below. 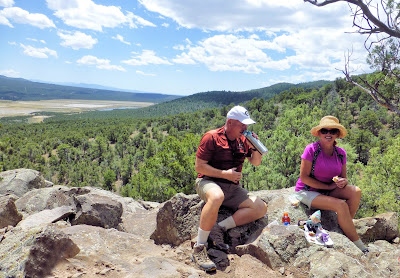 This is the lower viewpoint. We stopped here for a lunch break before hiking higher. 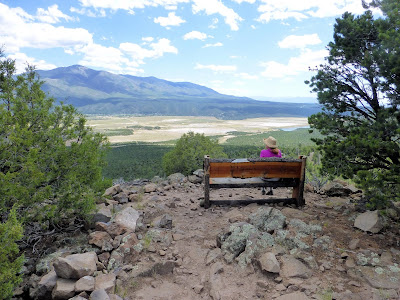 We reached the higher overlook and we were greeted with a comfortable bench upon which to sit and ponder, all while looking at the views below.

Well, that's going to do it for our initial blog on the Questa, NM area. Hopefully, you enjoy following us on some of our hikes.  In the next blog post, we'll take a look at other areas we visited (no more hiking for a bit).