Time Flew By in Albuquerque

Posted from Lakewood, NM
(Click on Pics to Enlarge)

We lifted the jacks in Santa, Fe and moved on to Albuquerque on September 5th. We only reserved a week at High Desert RV Park on the west side of Albuquerque, but we certainly could have spent more time there. We only scratched the surface with a few things that we wanted to do and see, but hey, we're FTers, we can always return. 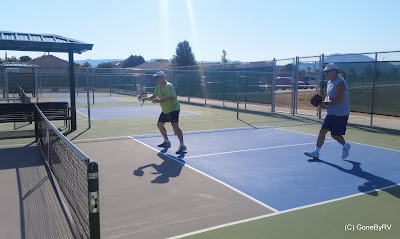 I haven't talked about Pickleball in awhile and that's because we haven't played in a bit. By checking the USAPA site, you can use their locator to search for areas to play. We found that the Albuquerque Pickleball Club seemed to have some very nice courts and we could play at several outdoor locations across the city. The City of Albuquerque had recently installed 18 beautiful, permanent courts at the Manzano Mesa Center. If you are a pickleballer in the Albuquerque area, we sure and check these courts out. Karen and I were able to play with about 20-25 players each morning between 0830-1130.  We had a great time.  The folks at this club were most welcoming. 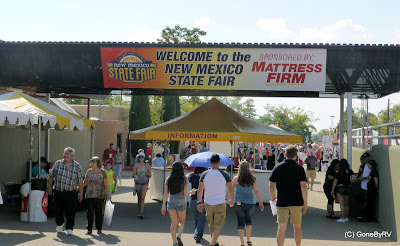 Randy asked us if we were going to attend the New Mexico State Fair while in Albuquerque. By doing a bit of internet research we found out that the New Mexico State Fair was being held this week in Albuquerque. We hadn't been to a fair in awhile, so on Friday evening September 8th we made the drive downtown. I'm not sure how many of our readers are familiar with Groupon, but we've used them several times to obtain some pretty nice discounts to events through the years. Their site is free to join and you just never know when they might have some discounted tickets for an event you'd like to attend. We used them to purchase a day ticket to the State Fair. The regular adult daily price was $10, but Groupon had tickets for $7. Many times, we've used 2-for-1 offers. 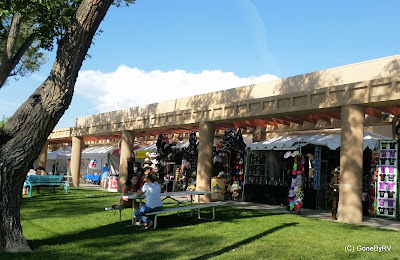 This State Fair was very well run and the grounds were kept very clean. There were a lot of vendors from many different groups selling some very nice items. Karen limited her urges to buy by using great self restraint. 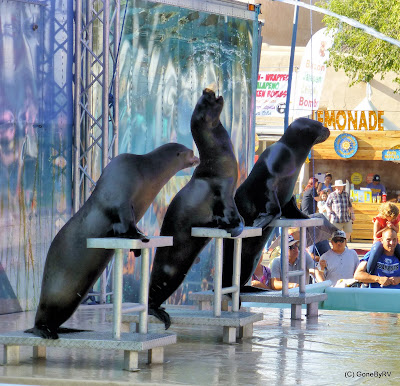 Of course no fair would be a true fair without animals. This show featured several different types of sea lions. The owners did a nice job of educating the crowd about sea lions, rather than just showing us what "tricks" they could perform. 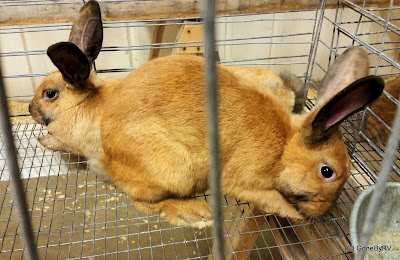 The "standard" animals were also on display. 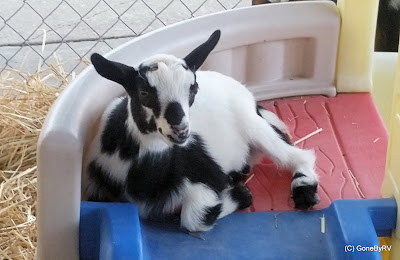 We didn't see a lot of horses and cows, but we believe it was because their judging wasn't until later in the week.  Goats are always cute, though. 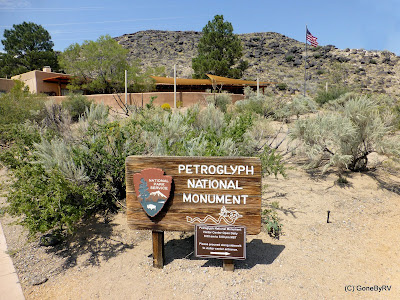 On September 9th we decided to do a bit of hiking in the Petroglyph National Monument.  This park is on the northwest side of Albuquerque and is a bit different than most we've gone to. 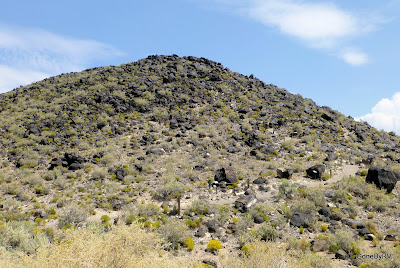 The area is not all centrally located, but requires a bit of driving to access the trails. There are no real trails which proceed from the Visitor's Center. The first area we went to was Boca Negra Canyon where there were 3 short hikes. The first ascends an area atop the remains of a long-ago volcano. 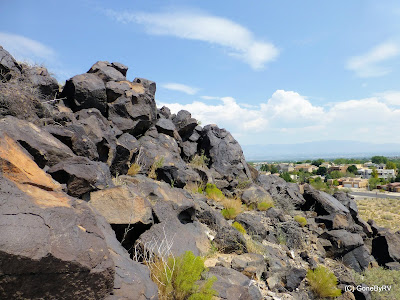 Notice how near it is to modern development in the background. 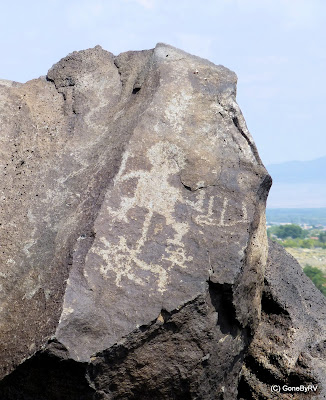 For those who enjoy petroglyphs, this is definitely a must see park. They are literally hundreds scattered throughout the hiking trails. 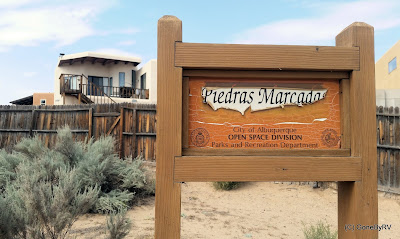 We moved on to another part of the park named Piedras Marcadas Canyon. This area is even stranger as the trailhead begins behind a Jiffy Lube and the first 1/4 mile winds through a residential area. 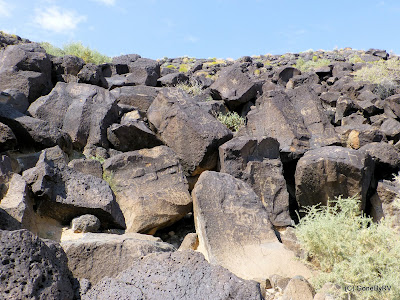 The entire hike was only about 1 3/4 miles (with absolutely no shade), but the petroglyphs were everywhere. 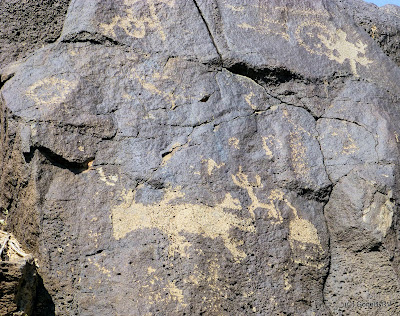 I'm intentionally only showing a couple of the petroglyphs as a teaser to hopefully get you to take a look at the link at the beginning of the blog to see more. 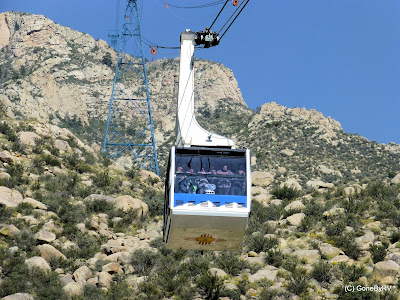 Our last "big adventure" in Albuquerque was to visit the Sandia Peak Tramway  on September 11. (Thank you again Randy!)  The tramway transports riders from the base terminal (at 6559 feet) to the summit (at 10378 feet). 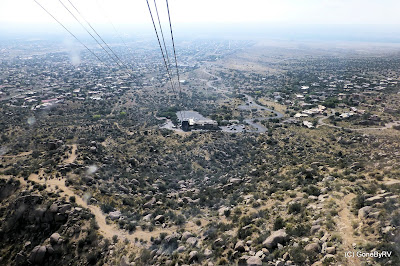 There are only two towers between the top and bottom terminals. The tramway is 2.7 miles in diagonal length and is the third longest single span aerial tramway in the world. Here's a view looking down as we approach the first tower. 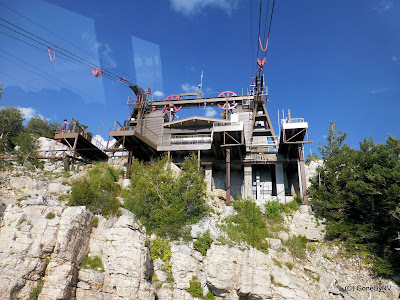 Just about ready to dock at the top terminal. 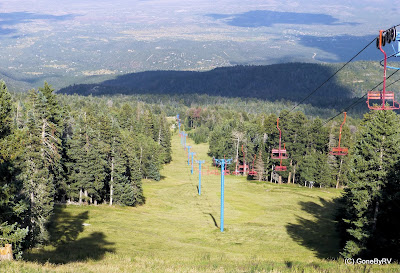 Once you reach the top, you can hike some trails, just enjoy the views, eat at the restaurant (when completed), or ski down the back side of the mountain during the winter. 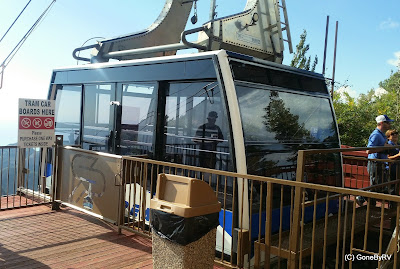 The temperature was about 20 degrees cooler at the top. On the day we visited, there was absolutely no wind at the summit.


Definitely a "must do" if you are ever in the Albuquerque area. The views from the summit are beautiful.

Well, that wraps up our week in Albuquerque.  As I said initially, too little time spent here. There are many things we will return to the area to participate in.


As always, thanks for stopping by!