Posted from near Roswell, NM
(Click on Pics to Enlarge)

To view additional pics not included in this blog, click below:

We really enjoyed our 2-week stay in the Santa Fe, NM area. There are a variety of things to see and do while in the area. If you like to shop (and have lots of money) head down to the central Plaza area. There are literally shops everywhere. We can only hold so many items in our MH, so we tend to do less shopping and more "learning" when in an area.

We always enjoy visiting state capitol buildings, so we made this our first stop on August 30. Here's a tip if you'd like to visit the Capitol Building or the plaza for that matter. Since pay parking (either via meters or parking garages) is the norm in Santa Fe, I decided to see if a "cheaper" way to visit was possible. I found that you can park in the multi-story parking garage on the west side of the Capitol for free.  We used this while touring the Capitol Building and while walking down to the Plaza area. 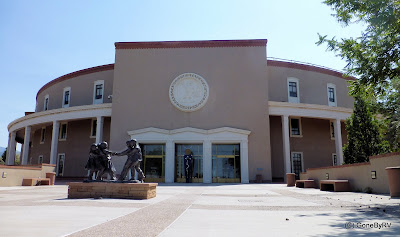 We entered the Capitol on the Don Gaspar Avenue (west) side. We've never been to any state capitol where there was so little security. We just walked right past the guard at the desk and continued in. 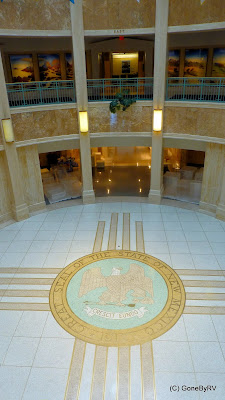 The New Mexico State Capitol building is the only state capitol building which is round in shape. When viewed from above, it would resemble the state seal. 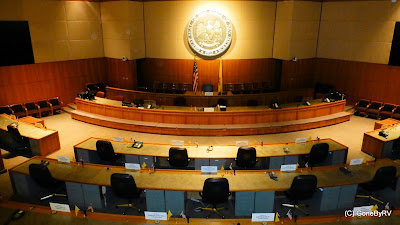 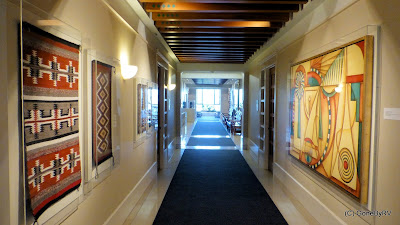 Aside from the shape of the building, one of the features within the capitol which really stood out was the inclusion of artwork throughout the building. 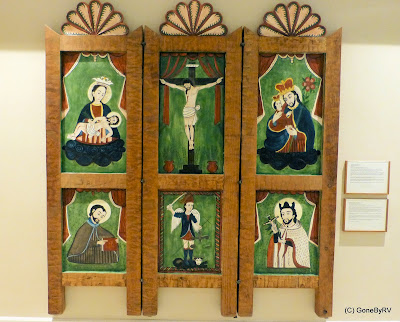 Although some of the displays rotate from time to time, many of the "Capitol Collection" are on permanent display.


IMHO the New Mexico Capitol Building is not as elegant, nor as instilling as a central point of power, as most state capitols we've visited. It did have the greatest display of artwork, however, and this definitely seems to be a theme of Santa Fe in general. For me, nice, but not quite what I expect in a state capitol. 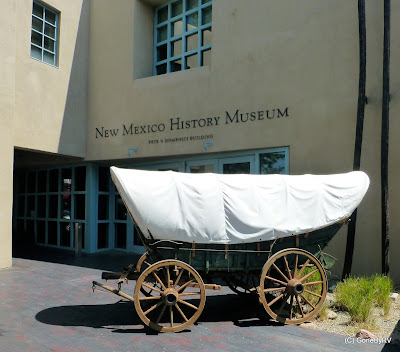 We left the State Capitol and walked north on the Old Santa Fe Trail (Street) to Santa Fe Plaza. This is only about 0.40 mile and an easy walk. Our next stop on the itinerary today was to visit the New Mexico History Museum. The museum is located on the north side of the Plaza, just behind the Palace of the Governors. 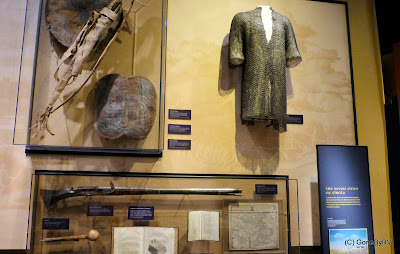 We enjoy museums in general, and this one was very well done. Adult admission is $12. Exhibits begin in the early days of pre-Spanish occupation and continue into the mid-20th century. 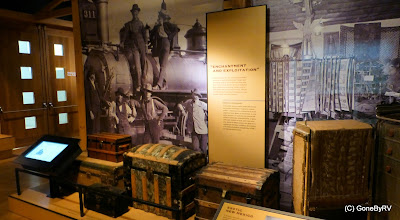 There are many exhibits and artifacts which address the arrive of the railroad and western exploration in this area. 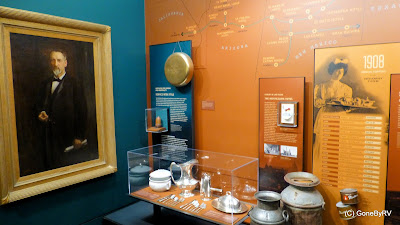 I was not familiar with Harvey Houses, but learned that during the early 1900s, Fred Harvey opened a chain of very nice restaurants and hotels along the railroad lines in the western part of the United States.


We felt that the museum was certainly worth the admission and gave us a lot of incite into the evolution of the State of New Mexico from early Native American times to "modern" times. It seemed to pull together many of the things we've learned in the past few years about the West in general, and about New Mexico in particular.

Okay, enough serious cultural exploring for today.  It was time to get outside and do some hiking! Thanks to a recommendation from Pam we decided to visit the Kasha-Katuwe Tent Rocks National Monument on August 31. The Monument area is located approximately 50 minutes from Santa Fe Skies RV Park. The area is managed by the BLM. 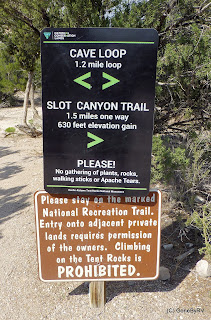 There are basically two hiking trails in the park.  Neither are that long, so we did both. 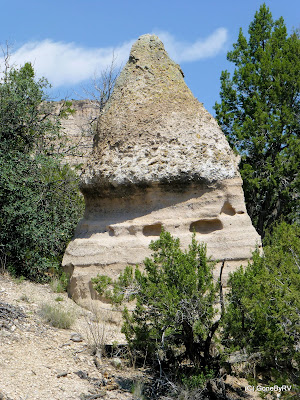 The "tent rocks" are the star of the show in this area. (The section below if from the BLM website).
The cone-shaped tent rock formations are the products of volcanic eruptions that occurred 6 to 7 million years ago and left pumice, ash, and tuff deposits over 1,000 feet thick.
Precariously perched on many of the tapering hoodoos are boulder caps that protect the softer pumice and tuff below. Some tents have lost their hard, resistant caprocks, and are disintegrating. While fairly uniform in shape, the tent rock formations vary in height from a few feet up to 90 feet. 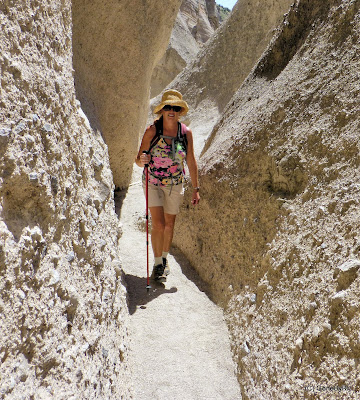 We hiked the Slot Canyon first. We are still amazed at the beauty of these geographic formations. 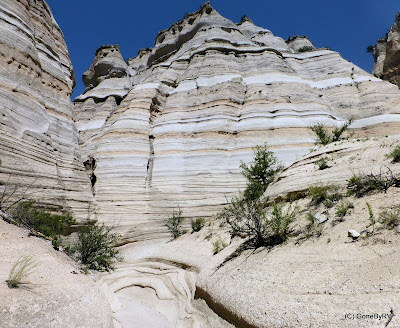 The striations present in the walls of the canyon were amazing. 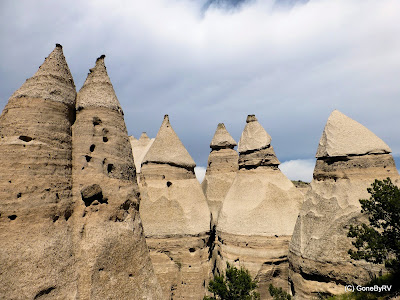 After climbing through the slot canyon and up to the crest of the wall we were able to view a large formation of the "tent rocks". 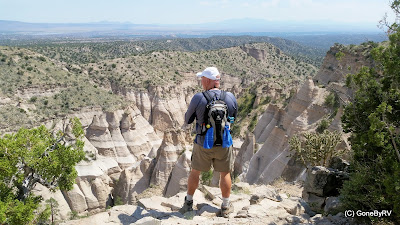 The hike to the top was definitely worth it. Thanks again Pam for steering us to this area.

Our 2 weeks visiting the Santa Fe area seemed to go by way too fast. There are many other things we'd like to see and do in this area. I'm sure that a return trip is in order in the future. Next stop Albuquerque!