Posted from Albuquerque, NM
(Click on Pics to Enlarge)

To view additional pictures not contained in this blog, click below: 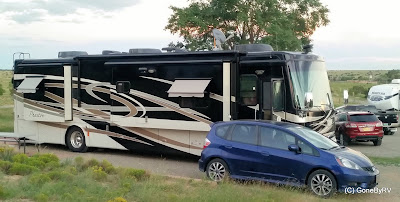 On August 22nd we drove a whopping 105 miles south to our next destination on the south side of Santa Fe. We would be spending the next two weeks at Santa Fe Skies RV Park. This was a somewhat "interesting" park. We had a back-in site and there was plenty of room between sites. 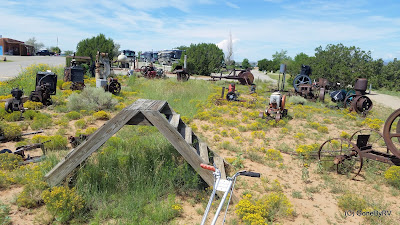 As we understand it, the owner and constructor of the park was (or maybe still is) into the construction business.  As such, he has a vast array of machinery scattered throughout the park. Pretty interesting to read the plaques detailing some of the history of the machines. 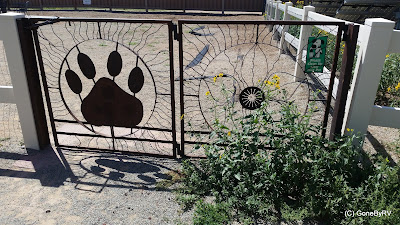 Also, metal art is prevalent at many locations in the park. It was keeping in spirit with the "artsy" attitude of Santa Fe. 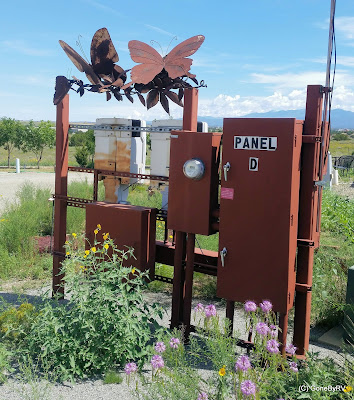 Even a simple utility is fair game for metal art. Actually, kind of cool! 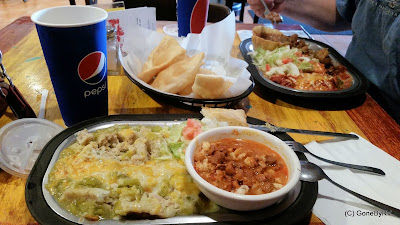 On August 23rd we looked for a bit of local cuisine and decided on Posa's Tamale Factory and Restaurant. This was a small local restaurant which had good reviews. Karen was introduced to posole. She also ordered two tamales with green chile and sopapillas on the side. She said that the green chile was a "lip burner". I had a combination plate of taco, tamale, and chile relleno (plus the sopapillas).  Excellent food at a fair price! 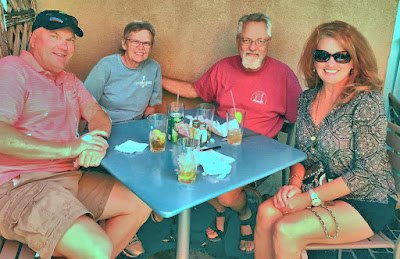 We met up with Pam and Randy on August 25th. They are old RVing friends from Virginia and have been FTing several years longer than us. We have crossed paths several times thru the years and we were very happy that they decided to drive up from Albuquerque to spend the greater part of the day with us. Randy lived in Santa Fe as a youngster, so he was able to give us the "tour" of the city. Here's a picture of us at The Shed Restaurant down in the historic part of Santa Fe. Randy and Pam had been here before and it certainly didn't disappoint. The red chile here burned my "eastern" lips. 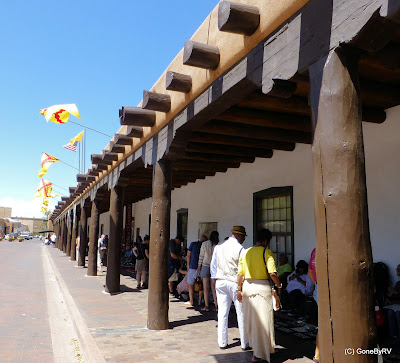 When in Santa Fe, a must see is the plaza area. The Palace of the Governors is a very old structure. Native American vendors sell their wares on the covered porch area today. We were told that all of the items must be genuinely created by the Native Americans selling them and the selling "spots" are acquired through a rotating lottery system. 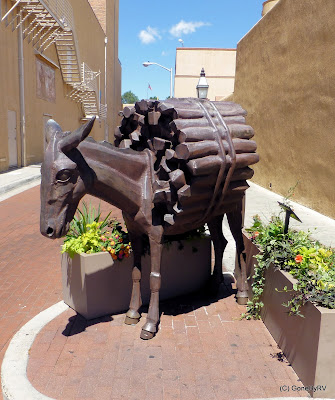 For those who love to shop for decorative items, Santa Fe is a mecca. I've never seen so many galleries and shops in such a small area. Sculptures are scattered throughout the area. 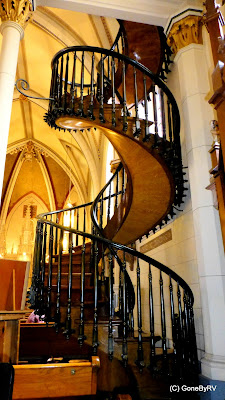 At the end of the Santa Fe Trail (here in the historic area of Santa Fe) lies the Loretto Chapel. For a small fee, tourists can go inside and view the miraculous staircase. The construction of the staircase is somewhat of a mystery as no nails or pegs were used in the construction process. 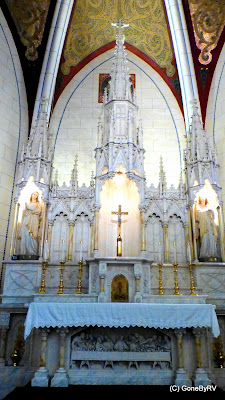 In 1873 construction was begun on the Loretto Chapel. Today, many marriages are performed in the beautiful complex. 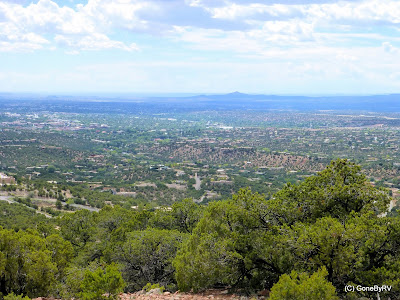 What recent blog of ours would be complete without the mention of a hike!  On August 26th we drove just north of Santa Fe and hiked a relatively short (about 4 miles) trail named the Dale Ball Trail. We were able to get some great views of the Santa Fe area below. 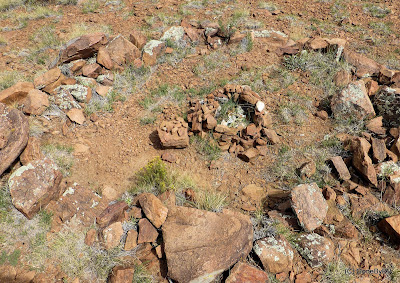 Near the top of the peak we ran across what we believe to be an area where pets have been buried.

In our next blog we'll take a look at the New Mexico capitol building in Santa Fe and describe one of the "neatest" hikes we've done in a bit.

As always, thanks for stopping by to take a look!
Posted by Steve and Karen at 9:14 PM