Do You Believe? and an Unexpected Surprise

Posted from Benson, AZ
(Click on Pics to Enlarge)

As always, if you'd like to see pictures not included in this blog, click on a link below:

After leaving Albuquerque, NM we traveled to the Roswell, NM area with the sole intention of visiting the UFO Museum in Roswell.  We looked at the area's campgrounds and decided upon New Mexico's first state park Bottomless Lakes.  We arrived on September 12 and booked for three nights. There are 5 FHU sites available for use. The remaining 26 sites have W/E (either 30 or 50 amp). The campground has very little shade, but is easy to navigate with a large rig.

The utilities worked well, but here's a caution about "hard water" in this area. We knew the water in this part of New Mexico contained a lot of deposits (mainly calcium carbonate), but we didn't know that the levels were this high.  Here's a chart we found in the Visitor's Center.  The bottom line is to either bring your own water, or definitely use a water softener.

So why the name Bottomless Lakes?  The park consists of eight lakes which are actually sinkholes ranging in depth from 17 to 90 feet. These were formed when circulating waters dissolved salt and gypsum to form subterranean caverns. Eventually, the roofs of the caverns collapsed due to their own weight. Sinkholes formed and were filled with water to create the eight lakes in the park. 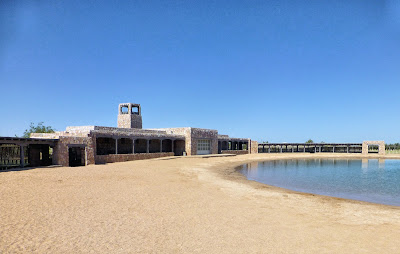 The largest of the lakes in named Lea Lake. This is also the closest one to the campground. Many of the structures were created in the 1930s by the CCC. I would imagine that the swimming area is busy in the summertime, but not during our stay. 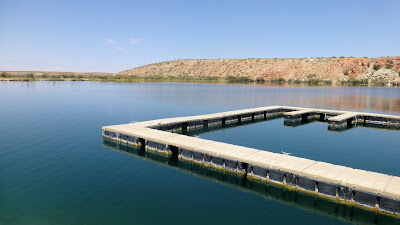 There is a small marina which during the busy season has kayak and paddle boat rentals. 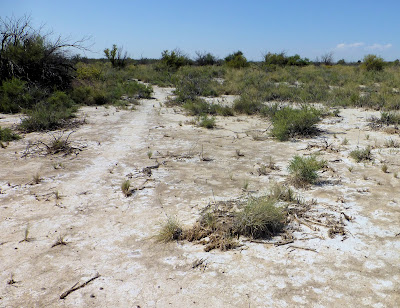 Since we enjoying hiking, our real surprise was to find a trail named The Bluff Trail which takes you to all of the eight lakes in the park and to the Visitor's Center. After evaporation of surface water, evidence of salt deposits are readily found along the trail. 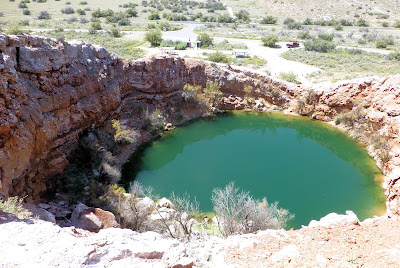 One of the most impressive lakes to me was Devil's Ink Well Lake. This lake was formed by a very large sinkhole and the highest point around the rim appears to be ready to break away at any moment today. 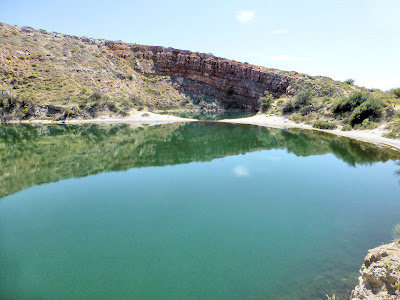 Mirror Lake was another impressive lake which was named for the glass-like surface.  Unfortunately, there was just a slight hint of a breeze today so the "mirror effect" wasn't as good as it could have been.

The entire hike from the campground to the Vistor's Center and back is approximately 4 miles, and is relatively flat. There is very little in the way of shade, so make sure and wear a hat and take water with you. 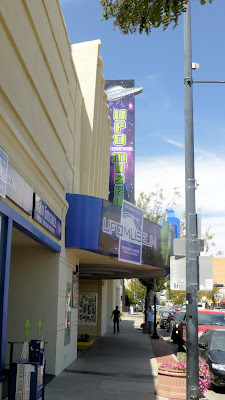 On the following day (September 14) we drove into Roswell to visit the International UFO Museum and Research Center. (Pretty impressive name, don't you think?) 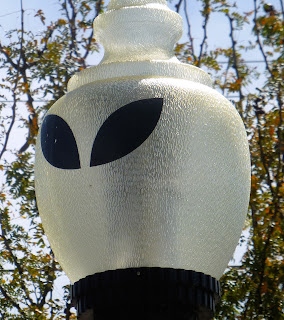 Following along with the theme of UFOs, the street lights in this part of Roswell are shaped to look like the alien heads from the 1947 incident. 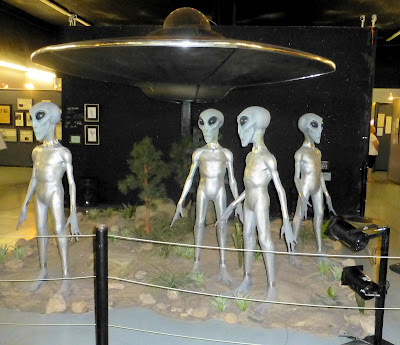 Let me start off by saying that "I want to believe" that there is the possibility of other creatures in the universe besides ourselves. With that being said, I was somewhat underwhelmed by the museum. I guess I expected more than figures which light up and have "smoke" rising from the top of their craft. 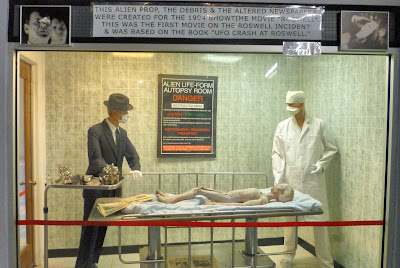 I never saw the 1994 movie entitled "Roswell", but might have to take a look after viewing some of the props from the same.

Summation on the museum: I wouldn't spend a lot of time diverting to Roswell just to see this. Fortunately, admission to the museum is only $5 per adult, but we used a Groupon deal to get in for $5 for the both of us. I guess that I already knew most of what was on display in the museum by watching television shows on the 1947 incident.

All in all, we were glad that we spent a few days in the Roswell area. The Bottomless Lakes SP was very nice and the UFO Museum was "ok".