A Visit to Hovenweep National Monument

Posted from Ignacio, CO
(Click on Pics to Enlarge)

Not all of our time in the Cortez, CO area was spent visiting Mesa Verde NP. One day we decided to take a drive of about 45 miles to Hovenweep National Monument. Believe me, when you visit this area it will NOT be overrun by tourists. We might have seen 10 people total during our visit. This is the route we took from our CG (near Mesa Verde NP). We traveled to the NM by heading south out of Cortez and returned by the northern route to Cortez. The Visitor's Center is just into Utah. 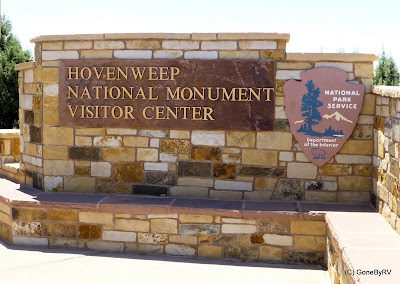 We knew very little about the area or what we would be viewing, so our first stop was the Hovenweep Visitor's Center to pick up a map, and to watch a short video detailing what we would be discovering.

We discovered that the Hovenweep National Monument (HNM) consists of a collection of several sites spread throughout many miles.  The most visited area (which also contains the most structures in one location) is named Square Tower. This area can be hiked from the Visitor's Center via the Little Ruin Trail. The trail is slightly over 2 miles, but will take a couple of hours to complete.

We also discovered that the majority of the other sites can only be reached via 4x4 or high clearance vehicle.  Because the Honda Fit meets neither of these requirements, we spent the entire day exploring the Little Ruin Trail.

The trail begins at the Visitor's Center and led us to the rim top of the canyon.  We followed the trail counterclockwise and stayed on the rim until the last 1/2 mile (near the north end of the canyon). At that point you have to hike into, and out of, the canyon to complete the loop.

The Hovenweep structures are amazing in their construction.  When you consider that you are looking at structures built between 900-1300 AD and think about the primitive tools used, all I can say is WOW! Sometime around 900 AD as the population grew in the mesa and more land was needed for agriculture, groups combined into communities when water sources were located. (In this case near the head of the canyon on the south end.) 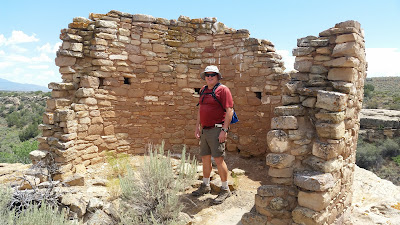 Tower Point commands a great view up and down the canyon. Notice the circular construction technique employed. 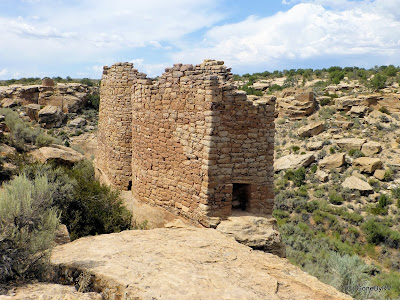 Twin Towers structure originally contained 16 rooms. The structures were built right on the edge of the canyon on bedrock with their walls almost touching. Wooden lintels (shown at the top of the rectangular opening) are original to the structure. 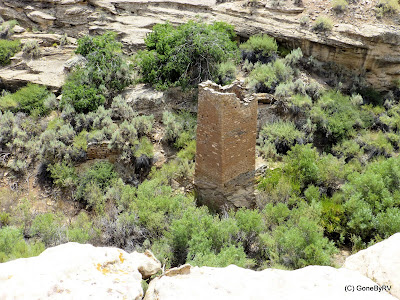 Square Tower was built on a large sandstone boulder down in the canyon. There was originally a door facing the spring on the south end of the structure. 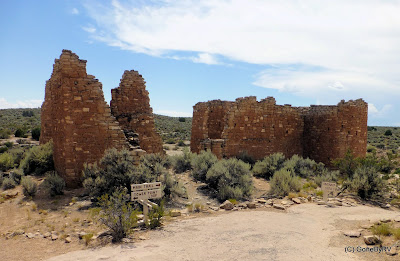 One of the most interesting structures was Hovenweep Castle. It consisted of two D-shaped towers sitting right on the edge of the canyon rim. A wooden beam in the castle was dated at 1277 AD, one of the oldest dates on any structure in the San Juan region. The residents who lived here were not kings and queens, but were farmers.

By 1300 AD, the inhabitants of this area departed. They moved south into central Arizona and to the Rio Grande Valley in New Mexico. The ruins remained undisturbed until Mormon expeditions came upon the area in the 1850s.


We really didn't know what to expect when we came to visit Hovenweep National Monument, but were very pleasantly surprised. If in the area, this is definitely worth a visit. NOTE: It was pretty hot during our visit, so earlier in the day or later in the afternoon worth make for a more enjoyable time.


This is the last blog entry for the Mesa Verde area. We will be moving on next to Ignacio, CO, just a few miles southeast of Durango, CO.