Driving the Million Dollar Highway (in the Fit)

Posted from Questa, NM
(Click on Pics to Enlarge)


Yes, I've managed to get behind in our blog posting again, but I wanted to make this last post about our adventure in Ignacio, CO before moving on. We decided to drive the "Million Dollar Highway" (US550) from Durango, CO to Ouray, CO.  Technically, the MDH moniker is most correctly attached to the section from Silverton, CO to Ouray, CO. It is only about 25 miles in length and loosely follows the Durango and Silverton Narrow Gauge Railroad line. There have been several versions of why the name MDH.  Some say it cost a million dollars per mile to construct, while others say that the highway contains a million dollars worth of gold ore.

The highway was constructed in 1883 by Otto Mears as a toll road between Ouray and Ironton (now abandoned). The road is a two-lane, windy path with very few guardrails and steep dropoffs along the edges.  Several points reach above the 11,000 feet level. 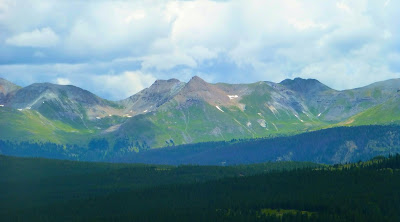 With all of that being said, the drive is beautiful. I know that many have taken their RVs along the entire route, but I'm not one of them. We, of course, started out on an overcast and rainy day, but the sky cleared nicely by the time we reached Ouray. 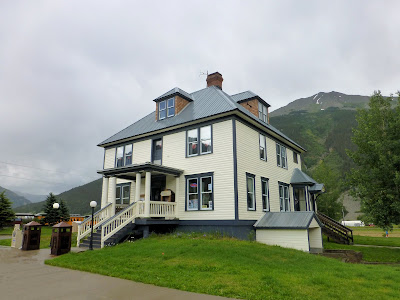 Honestly, the drive is not too bad coming north from Durango to Silverton. Mountainous, yes, but nothing "scary". We stopped in the Visitor's Center in Silverton to get a bit of local orientation.

The Durango and Silverton Narrow Gauge train was just leaving Silverton as we walked in. 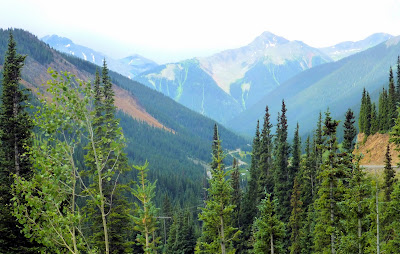 The stretch from Silverton to Ouray has the most beautiful mountain views (IMHO). 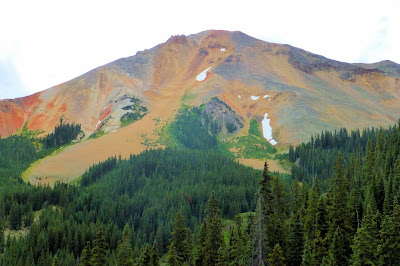 We stopped for a bit of sightseeing and roadside historical marker reading at Red Mountain Pass. The roadway in this area reaches just over 11,000 feet. 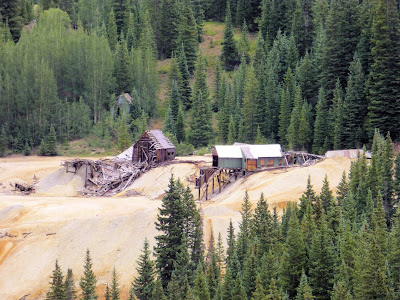 This area was collectively known as the Red Mountain Boomtown area. In the 1880s, six towns holding over 3000 people sprang up to support the numerous mines in the area. Today, abandoned mines dot the landscape. 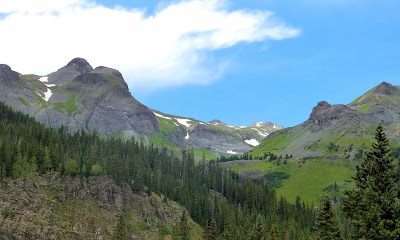 As we got closer to Ouray, the skies began to clear and the views of the mountains were magnificent. 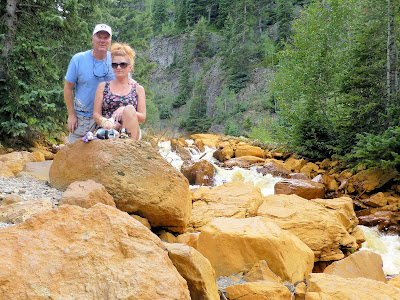 The Red Mountain area is aptly named as the iron oxide in the soil eventually finds its' way to the streams. The colorization of the rocks is seen beside us. 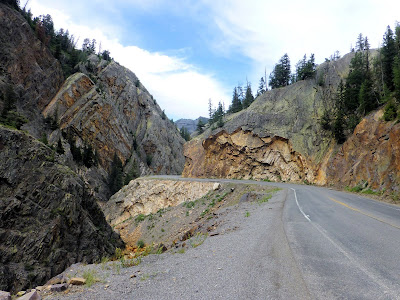 We're almost to Ouray now and the windy roads are made a bit more hazardous by the lack of guardrails along the steep canyon walls. 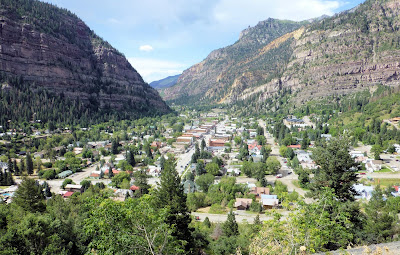 This is our first glimpse of Ouray from the highway above. As a sign nearby indicated, it reminded us of a Swiss town in America.

Ouray grew because of mining in the area. Prospectors first came to the area in 1875. At one time, there were more horses and mules in Ouray than people. The Denver and Rio Grande Railroad arrived in 1887 and would remain until 1930 when trucks and automobiles finally put an economic end to the rail line. 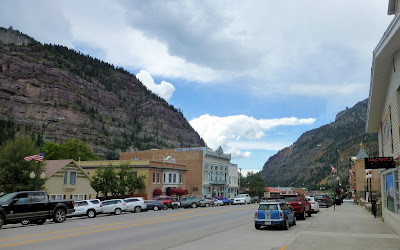 This is the main street thru Ouray today.  Obviously, much of today's economy is dependent upon the tourist industry. 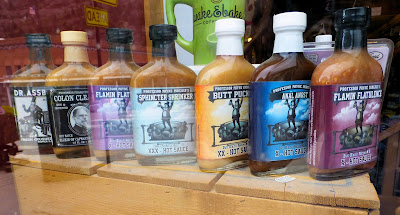 While walking along the main street stores, we happened to see some spices in the window, which we probably should have purchased. 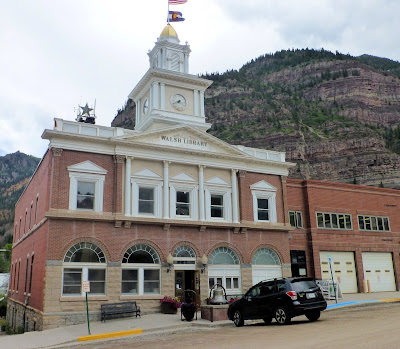 The Walsh Library was constructed in 1900 as a miniature replica of Independence Hall in Philadelphia, PA. The structure burned down in 1950, but a successful restoration in 1988 was able to restore the original facade. The building is currently used as City Hall.


Ouray was a "neat" little town to visit. You can easily feel yourself transported back to the early 1900s as you walk the streets and observe the buildings. We did manage to locate a modern day ice cream place to have some excellent ice cream before heading south again along the "Million Dollar Highway". If in the area, I would definitely recommend taking the drive. (I would leave the RV parked in the campground, however).

This is our last post about our activities while staying in Ignacio, CO.  We'll be moving on to South Fork, CO on August 1st. Yes, I realize that I'm behind in posting (again).