Posted from Questa, NM
(Click on Pics to Enlarge)

On 8/1/17 we pulled up the jacks and drove 96 miles east on US160 to South Fork, CO. Where is South Fork, CO you might ask? I thought the same. South Fork is located on US160 at the confluence of the South Fork and Rio Grande Rivers. The elevation is 8209 feet and the estimated population in 2016 was 365 people. Small town to be sure. There are no traffic lights in South Fork and only one fuel station. Did I say small?

We found out that the campgrounds in the area are favorites of Texans, in particular, to escape the summer heat. I don't believe we ran the air conditioners during the entire week we stayed at Peacock Meadows Riverside RV Park.  This RV park is relatively new (as of 2016) and as such, the landscaping leaves a lot to be desired. The nicest feature of this park is that the sites are nicely spaced. This was not true of many of the parks we saw in this area.  Many of the residents stay for the entire summer.

Much to our surprise, in a very small town like this, we found 3 pickleball courts to play on. The group of about 20-25 people played regularly several mornings each week. It was great fun to "stretch our paddles" after not really playing any since leaving Casa Grande in April. 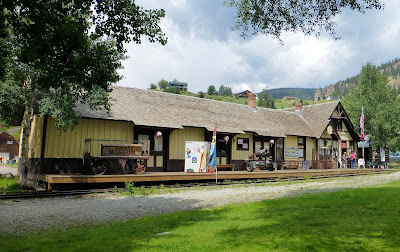 The real draw of this area is the numerous opportunities for experiencing outdoor activities. We thought about renting an ATV or UTV, but later decided on renting a Jeep after taking a drive to Creede. On the initial exploration trip we visited the Creede Historical Museum. 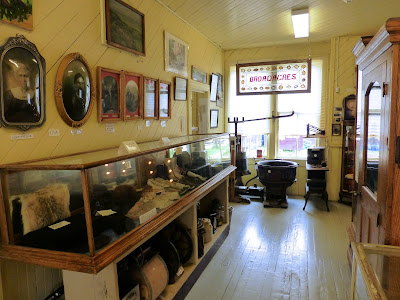 The museum is located in the old train deport and has a wealth of artifacts pertaining to Creede's history. 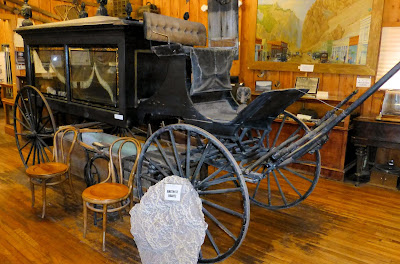 I loved this old horse-drawn hearse. 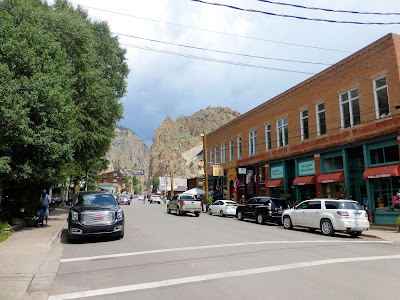 We started to explore the town, but the rain get us from doing much of that on this visit. It seemed that we got rain every afternoon while in the area. (Yes, I know it's "monsoon" season here in CO.) 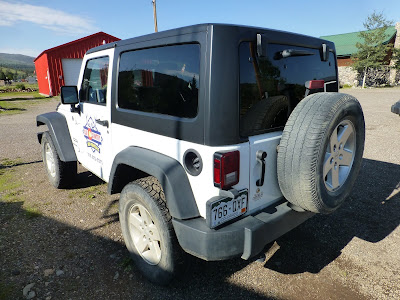 We rented a Jeep for the day from Elk Country Jeep Rentals  in South Fork. The full day rental actually turned out to be cheaper than renting an ATV or UTV. 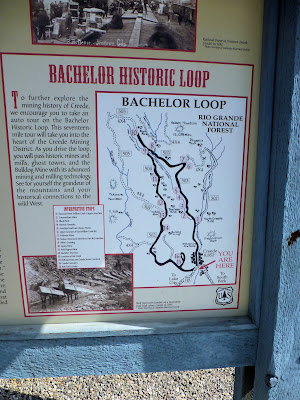 One of the areas we definitely wanted to visit was Bachelor's Loop Scenic Drive just north of Creede. This is a 17-mile loop which follows Willow Creek up the canyon on the east side leaving Creede. It takes you to many of the old mine locations from the 1890s and towns which rivaled Creede in size. 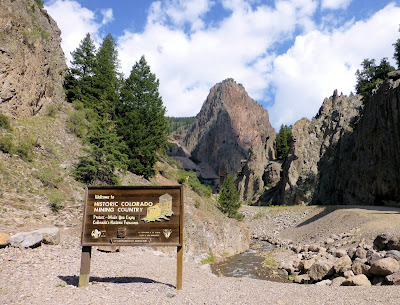 The road is to the right of the creek in this picture. 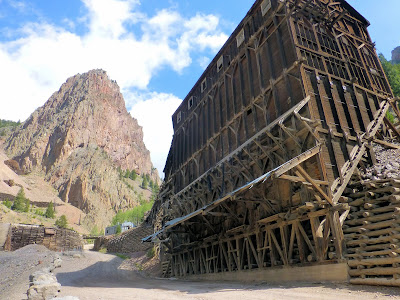 One of the most intact mines is the Commodore Mine. The initial claim was staked by John C. Mackenzie in 1891. The mine continued to operate until 1976. There are 200 miles of tunnels and workings inside the 5 levels of the mine. 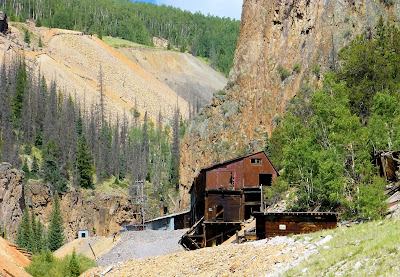 Not too far up the road is the Amethyst Mine. This was one of the two richest silver mines in the area back in the 1890s. The Last Chance Mine can be seen approximately 350 feet up the hill to the left. 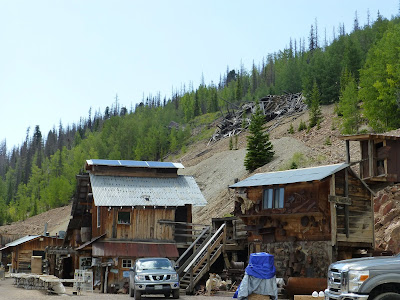 On the second half of the loop is the Last Chance Mine. This is the other best silver producing mine in the 1890s. Several shafts in this mine range from 1000 to 1500 feet. The mine has been renovated by a private party in recent years and tours of the mine have recently begun. 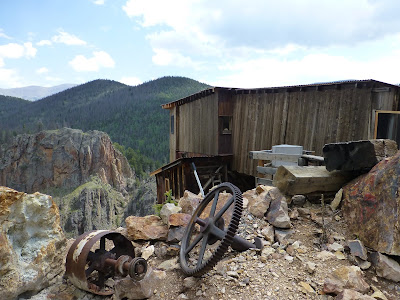 In true "tourist fashion" even a gift shop selling jewelry with stones "mined" from this area has been recently opened. 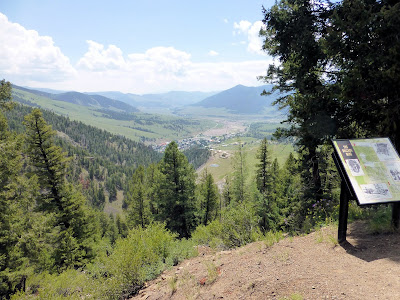 Nearing the end of the loop there is an overview in the area of the Bulldog Mine. This provided a great view of Creede below. 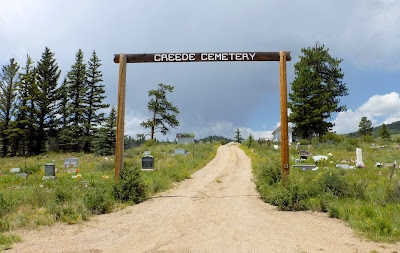 The last part of the scenic loop to us to Creede Cemetery.  A lot of old tombstones in this area. 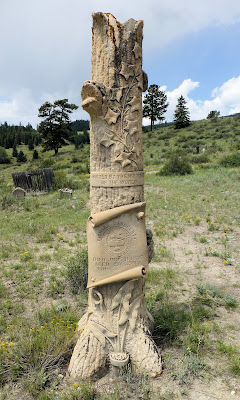 Some unusual markers as well. 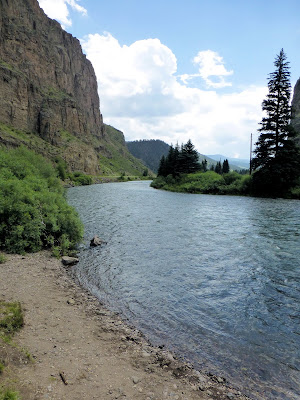 After finishing the Bachelor's Loop Historic Trail, we headed south from Creede and pulled off the road to have lunch along the Rio Grande River. What a beautiful area on a beautiful day (up to this point, at least).

To make better use of our Jeep's capabilities we decided to head up the mountain roads to Summitville. This was the site of huge gold mining operations. In 1873, gold veins were located at 11,500 feet on Smith Mountain. The mining town of Summitville was created for the mining operations. Operations continued into the 1990s when the company which currently ran the operations went bankrupt. The leaching of contaminants into the local waterways eventually caused this area to be turned into a "Superfund Site". The government eventually spent $155 million of public funds to clean up the site. 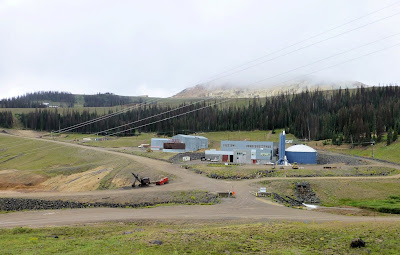 This is a picture of the clean up site today. 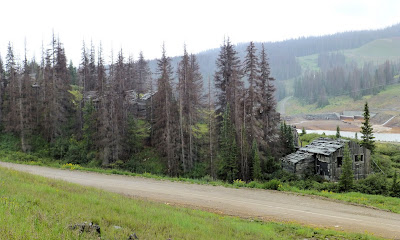 Here is all that is left of the historic remains of Summitville. 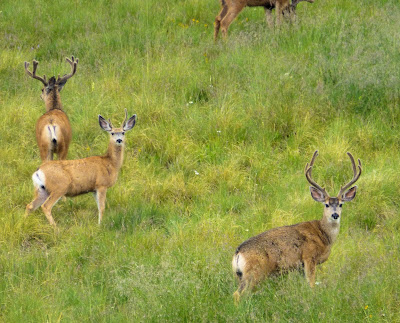 The combined high elevations and rains (again,of course) ensured that we were about the only ones on the road today. Well, there were a few creatures wondering what the heck we were doing up here. 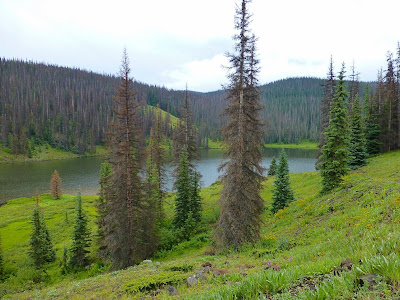 We finished off the day by driving down (and using true 4WD) to visit a high mountain reservoir. Beautiful area and not one other person around.


We only spent a week in South Fork, but we were pleasantly surprised to find a nice amount of things to do while there. Definitely a place to go if you'd like to get away from many of the "touristy" areas of CO. The air was cool and clean. We enjoyed ourselves!