A couple of blogs back I wrote about our first day visit to the U.S. Space and Rocket Center and the Redstone Arsenal.  We returned on Sunday May 24th to tour the rest of the Rocket Center. Even with a full second day to visit we discovered that there is a LOT to see. We began with a short tour of the Saturn V rocket located in the Davidson Center for Space Exploration.  The Saturn V rocket on display is one of only 3 complete rockets in the world. This rocket was our "heavy hauler".  It carried five of the enormously powerful F-1 rockets in the first stage. To give a feeling for the amount of energy involved, each of the F1 engines generated 1.5 million pounds of thrust for a total of 7.5 million pounds combined. That is more than 85 Hoover Dams combined! 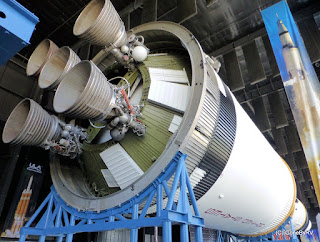 This is a picture of Stage 2 of the rocket. 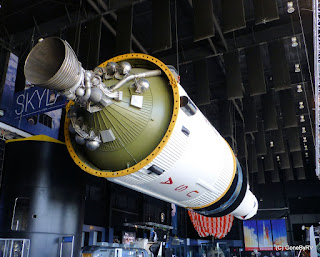 The next three pictures, in proper sequence, ascend up the rocket to the capsule positioned at the top. 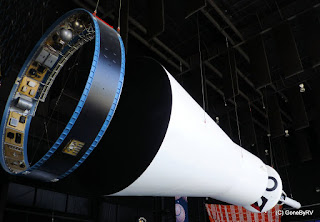 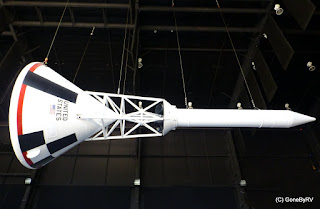 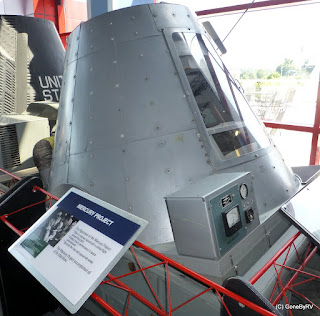 The tour of the center actually begins around the perimeter of the Saturn V suspended overhead.  It starts with the Mercury project capsule and progresses chronologically to tell the story of the United States space program through the years.  The Mercury project was our effort to place a man in orbit around the earth.  The Mercury capsule only had room for one astronaut. 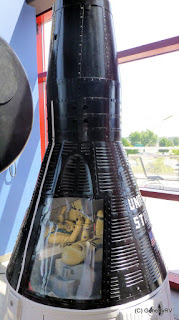 The next item on display was the Gemini Mission Simulator.  This was a piece of training equipment used to train astronauts on earth for ingress and egress movements in space. 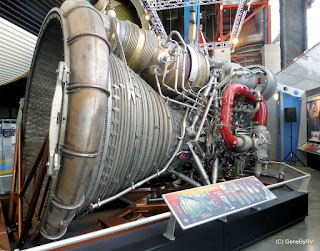 A lot of displays are devoted to the evolution of the rocket engine. On display are the F1 (used in the Saturn V), but also here are the H-1, a V-2 rocket engine (used by the Germans in WWII), and J2 engines. 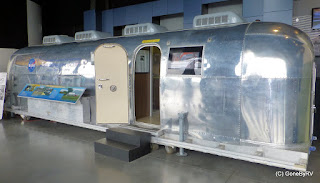 A lunar rock sample collected during the Apollo 12 mission is on display, as is a restored Airstream trailer used in the early days of space exploration to quarantine returning astronauts from space. 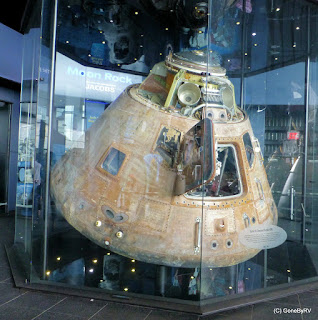 The real Apollo 16 Command Module is on display in the center. 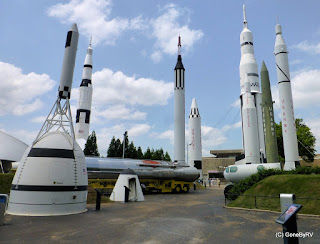 We continued outside to visit "Rocket Park".  On display are rockets used to transport satellites into space, ICBM missiles from the Cold War Era, and even some "concept" lunar rovers which never made it into production.

Because the Redstone Arsenal is so tightly connected to the space program in Huntsville, a collection of weaponry is also displayed. 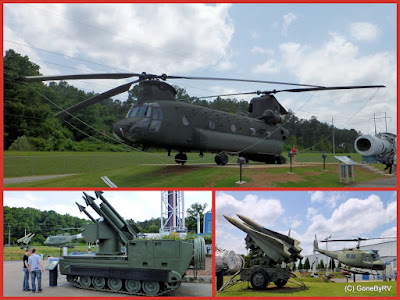 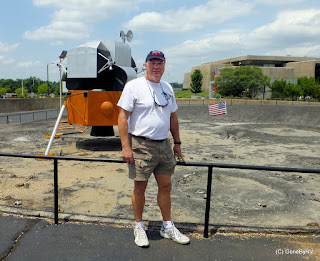 Of course, I had to "pose" in front of the Lunar Excursion Module (LEM) on the Lunar Crater. 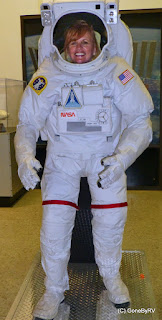 There is an entire building devoted to the collection of space hardware and astronaut gear.  You can even pretend to be an astronaut.  (I think we're a bit too old for this one, however!) 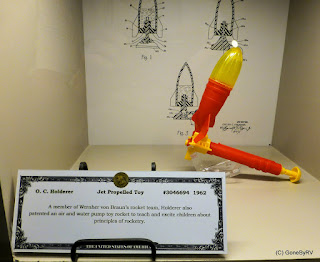 One very interesting part of the exhibit was devoted to patents devoted to any type of connection to the developments which have come about as a result of the space program.  Does anyone else recall, or have, one of these when they were younger.  I knew immediately what this was when I first saw it and even had one when I was small. 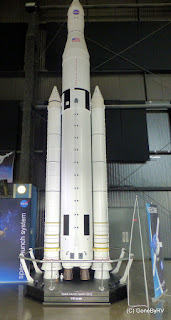 The center also shows where the U.S. Space Program is headed in the future.  The Hubbell Space Telescope is due to be replaced in a few years by the Webb Space Telescope.  This will allow scientists to see much further into space than possible today.  Also, the next generation of transport vehicles will be carried by the Space Launch System (SLS).  This is to be the successor to the Space Shuttle System which is now part of our space history.

We completed our visit by watching another 3D film, "Hidden Universe" in the huge IMAX theater.  There are also a number of attractions designed to demonstrate some of the training astronauts encounter with names such as "Space Shot", "G Force", and "Space Mission Simulator".  We decided to pass on these.  There is truly a lot to see at the US Space and Rocket Center in Huntsville, AL.  We would highly recommend it to anyone interested in this type of American technology history.

I have many more pictures available for viewing in our Google+ Album on the US Space and Rocket Center.   Please take a look.


Thanks for stopping by to take a look!
Posted by Steve and Karen at 1:07 AM

Email ThisBlogThis!Share to TwitterShare to FacebookShare to Pinterest
Labels: Huntsville AL, US Space and Rocket Center