Our last blog was about the visit to the US Space and Rocket Center (Part 1).  We actually enjoyed another event between those two visits and this blog is about the Alabama Jubilee Hot-Air Balloon Classic. (Part 2 of the Rocket Center visit will be in the next blog.)

The Alabama Jubilee began as a hot-air balloon race in 1978 in Decatur, AL. It is the oldest, and now the largest, such event in the entire mid-South area. The event was held on Saturday May 23 and Sunday May 24.  We attended on Saturday. 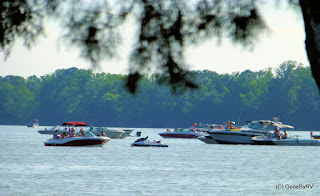 The event kicks off the summer season and was very well attended.  Point Mallard Park is bordered by the Tennessee River and Flint Creek on two sides.  As it was a nice day, many boaters were out to begin the season and watch the balloons. 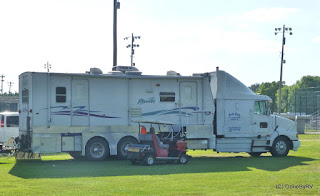 The event draws a very large number of crafters, vendors, and food vendors selling all types of “healthy” (or not) foods.  I’m not sure if this rig belonged to one of the vendors or one of the balloonists, but I thought it was interesting.

Many of the balloons were going to offer free “tethered” balloon rides, but the winds didn’t cooperate and they had to be cancelled for the day. 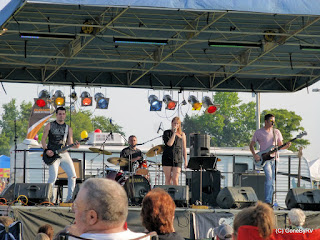 The real draw for the day was the evening “glow” by approximately 24 of the balloons, but several live bands were scheduled to play prior to the evening's main event. The first band, called the “Overtones” began about 7 PM and played a lot of cover songs from artists spanning the ‘70s thru the ‘90s.  They were pretty good and the crowd seemed happy. 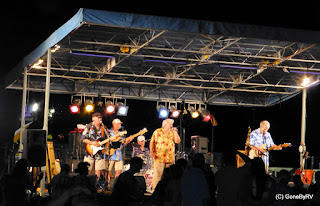 The second band of the evening was named “Four on the Floor”. These guys had been together for a number of years and played a real variety of music.  Again, good music and they played until the “glow” of the balloons began. 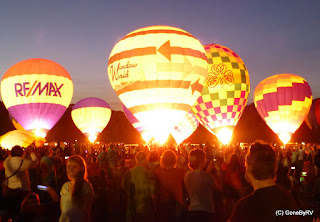 Just at dusk set in and the sun sank below the trees the balloons aired up and started to “glow”. 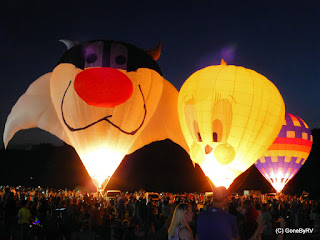 When all were inflated, there were about 24 balloons participating in the evening “glow”.  I understand that there were approximately 60 balloons competing during the daytime races on Saturday and Sunday.  I thought Tweetie Bird and Sylvester were some of the more unique balloons.  (Insert Pic # 1030261)

Here’s a short video of some of the day’s sights and sounds.  The group “The Overtones” are playing during the second half of the video.

(The video is best viewed in 1080 resolution and full screen)


Thanks for dropping by to take a look!
Posted by Steve and Karen at 11:46 AM